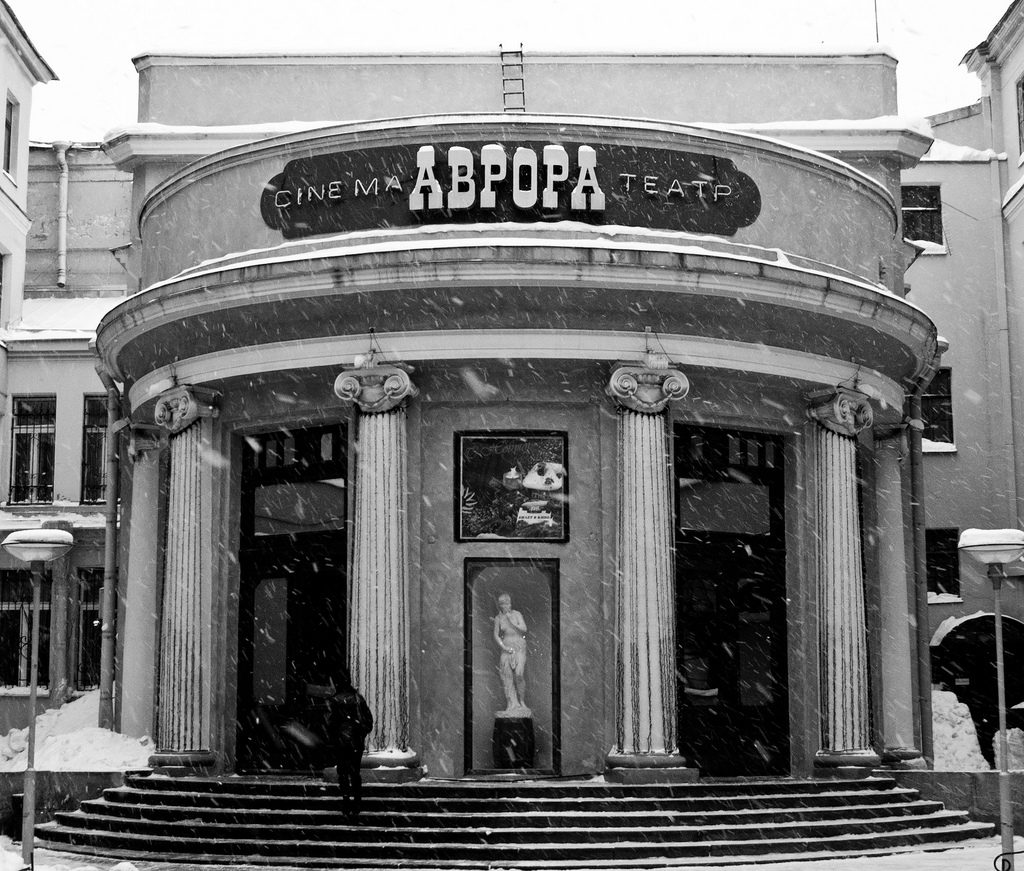 Of course if you are here to study Russian, you should be going to watch original Russian Cinema. But for those who have arrived only recently, are lazy, or find Russian dubbing of their favourite movies too weird, there are a couple cinemas around town where, every now and then, they show movies in the original language with Russian subtitles. I personally like to read the subtitles and compare them to the dialogue, and sometimes find some amusing adaptations, or get to learn how my favourite movie quotes are translated into Russian.
Here are the movie theatres I have visited so far.

Saint Petersburg’s first cinema theatre, the building was inaugurated in 1913 with the name “Pikadilly” but it was re-baptized Avrora in 1932. Since its foundation it has been a multi-functional theatre, screening past and contemporary movies in two halls (Bolshoy Zal’ and the smaller VIP Zal’) but also concerts, theatre, operas and talks. The interior is stunningly faithful to the style of the ‘30s and ‘40s, with dim lighting from stained-glass lamps, and quirky art-deco interior design. They often launch niche-cinema festivals, dedicated to great actors or directors (for example the Fellini Festival last March, or Hitchcock in January) and it is usually during these that they screen original Russian cinema.

Also known as Rodina, this majestic theatre also has the occasional screening in original language, and, generally, shows the less-blockbustery movies compared to other cinemas in town. According to their website’s biography, they were the first cinema to open in Petrograd in 1917, and not the Avrora. There must be some competition between the two institutions.. In any case, Dom Kino, too, hosts festivals and special meetings, as well as lectures on all things cinematographic and photographic exhibitions.

Part of the Hotel Angleterre, this small theatre has regular screenings of foreign films for its guests, but of course anyone can come there. They too host festivals, premiere events and special meetings with directors and actors.

A tiny, unofficial, student-run screening room, Kino Bez Popkorna (“without popcorn”) generally screens lesser-known films in the original language with Russian subtitles. As the name implies, they don’t have popcorn, but you get a cup of tea along with your entrance fee (200 r). The room seats about 30 people – get there early to get the more comfortable couches or armchairs! (In the same building there are also a nice bar where they often play live music and, from what I heard, an amazing veggie burger joint – I will go check it out soon!)

Cinema “Pik” near Sadovaya, and “Formula Kino” near Ploshad’ Vosstanya sometimes show the bigger box-office hits in the original language.

You can take a look at https://spb.subscity.ru/ (like most of the other links, it is only in Russian) for a comprehensive agenda of original language screenings. Enjoy!