Want to watch some Russian films or TV online but struggling to find good sources? We’ve complied a list of some of the best places for you! 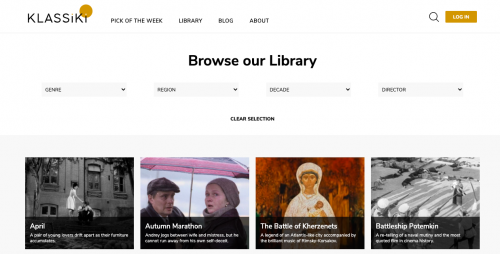 This streaming site only launched a few weeks ago, but it’s already set to be one of the main hubs for Russian-language films. As the name might suggest, this is a great site to watch classic Russian films, such as Battleship Potemkin and I Walk Around Moscow. Signing up for a free membership will give you access to 30 classic films for life, whilst paying for a premium membership gives you access to an extended film library plus a new film every week.

As the platform has launched very recently, you can currently be a premium member for free, with access to a new Russian film each week! The offer lasts until 4 April 2021, so it’s worth taking advantage of the free films while you can.

Russian Film Hub, like Klassiki, has many Soviet-era films available to watch for free with English subtitles. Some are sourced from YouTube, but many appear to be high quality and there is also the option to buy or rent some films if you’d like. Russian Film Hub also gives you the option to watch films by country, with options ranging from Modern Russia, Soviet Russia, and even Georgia and Latvia. If you’re looking for variety, this is a great website to go to!

It’s worth remembering that Netflix actually features content from all around the world, not just the country that you live in! Search ‘Russian films’ or simply ‘Russian’ to find Russian-language films and series on the streaming platform. Although this is a paid service, anything on Netflix is pretty much guaranteed to be high quality and offer English subtitles. If you already have a Netflix subscription, this is an easy place to go to practice your Russian listening skills. 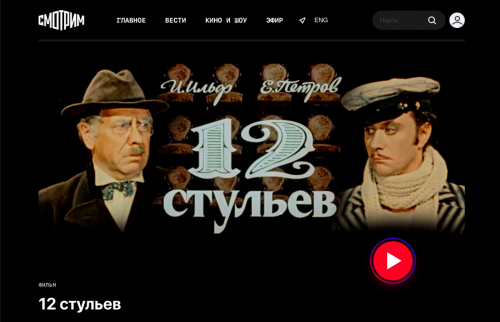 Although some of this website’s content is region-restricted, I found that I was able to stream several films and programmes here (especially older, Soviet-era films) without any problems. A free Russia-based streaming site, Smotrim has plenty of content available for you to watch (but beware, you might not find English subtitles!). This website is a great place to start if you’d like to watch Russian documentaries or programmes made more recently, and you feel comfortable watching something without English help.

It might seem obvious, but don’t forget that you can find a lot of fantastic Russian TV series and films on YouTube, or even Soviet-era cartoons if you prefer something shorter. It can be hard to know where to start if you don’t know what to search for, though. One YouTube account which has a great variety of TV shows is СТС, the Russian TV channel’s account, which contains entire series originally shown on TV (the popular comedy Кухня, for example, has 6 seasons and they’re all available!). If you’re looking for films, try Мосфильм‘s channel. It has feature length films available, mostly from the 20th century. Head to ‘Playlists’ to find their films grouped by category, such as historical films. Not all of these films have English subtitles, but there is a playlist called ‘Movies with English subtitles’ if you want to ensure that they’re available.

It’s worth noting that if you are currently in Russia, you’ll probably have access to a few more sources for watching Russian films or TV online, as you can find catch-up TV from channels such as СТС directly on the channel’s website (some Russian TV channels are not available to those living outside Russian territory). However, all sources listed above should work in most countries. Happy watching!