Saint Petersburg is, of course, renowned for housing some of the most marvellous museums, beautiful buildings and majestic monuments in the world. Despite the fact that they are all lovely in their own right, these are not the only things that the city has to offer to visitors and residents alike. Sometimes, it is simply pleasant to do something different all the while relaxing away from the hustle and bustle of the city centre. Thus, if you feel like discovering a lively yet tranquil place, visiting Новая Голландия (New Holland) is a must!

Historically, New Holland was built in the 18th century and it was traditionally linked with the Admiralty. It was Пётр Великий (Peter the Great) who decided to invite Dutch shipbuilders to the city in order to help build Saint Petersburg up from the swampy land on which it was originally situated. As a result of the influx of Dutch workmen, the area that is now New Holland was at the time known as “Holland”. As a result of which, the name stuck with the man-made island which is now a vibrant, recreational and cultural part of modern city life in Saint Petersburg.

At New Holland, anyone can find something to their taste. There are a whole plethora of events going on which are each exciting and different. For example, if you want to take a break from the city and go for a relaxing stroll, you can take a pleasant walk around New Holland. If, however, you fancy something more mentally engaging then there are events regarding various academic spheres. On the 23/08, there is a lecture on the topic of culture and creativity in Russia and the UK, and on the 30/08, there is another lecture on the subject of public art and national identity in Vilnius and Minsk.

But if you don’t feel like attending a lecture open to the public, there are still more activities on offer. There are yoga classes which take place on Mondays, Wednesdays, Fridays at 10AM. Yet, it is worth mentioning that these yoga classes will only be taking place if the weather is good, and they will no longer be taking place after the 31/08.

Even if you aren’t in the mood for yoga, there are often film viewings and ensuing discussions in the evenings at New Holland. On the 24/08, the film club will be meeting to discuss the British film The Arbor. Maria Kuvshinova, a Russian journalist and film critic, will also be there presenting and offering her perspective on the film.

As a live music fan myself, every Wednesday evening is simply great. From 7:30PM, a jazz band from the JFC Jazz Club in Saint Petersburg perform at New Holland. It is great to see people gathering around and listening to some old-school American jazz, heavily influenced by the New Orleans jazz movement and musicians such as Louis Armstrong and Miles Davis. Many people dance in the lindy hop style to this timeless music and others simply tap their feet whilst happily listening away because they are enthralled by the music itself.

I was pleasantly surprised by the sheer amount of people that were there. It was a fantastic atmosphere and it was almost like being transported back into another era in which life went by at a slower pace. American jazz is clearly very popular in Saint Petersburg and I can understand why! It makes you smile and makes you want to dance to the music. I would recommend anyone to go and check this out on a Wednesday evening. It will help you relax and will offer you the chance to escape the hordes of people walking a long Невский проспект (Nevsky Prospect) in the heart of the city centre.

How to get to New Holland

Whilst still being situated close to the city centre, not far from Юсуповский дворец (Yusupov Palace) and Маринский театр (Mariinsky Theatre), the closest metro station to New Holland is Адмиралтейская (Admiralteyskaya) – i.e., 2 kilometres – which is roughly a 25-minute walk. Alternatively, there is the option of getting a bus from the bus stop ст. м. Невский проспект (Nevskiy Prospekt Station bus stop) to пл. Труда (Truda Square), from there you can already see the outer walls of New Holland and it is only a five-minute walk till you can enjoy all the delights that are on offer.

New Holland makes a real difference to Saint Petersburg. It allows for a relaxing gear change and it offers some pretty open-spaced greenery not too far from the city centre which the city had long needed. It is especially soothing at this time of year as the summer sun is often gorgeous in the evenings. I am sure that New Holland can offer you the chance to relax and chill out after a hard day’s work of studying Russian. 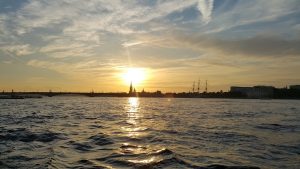