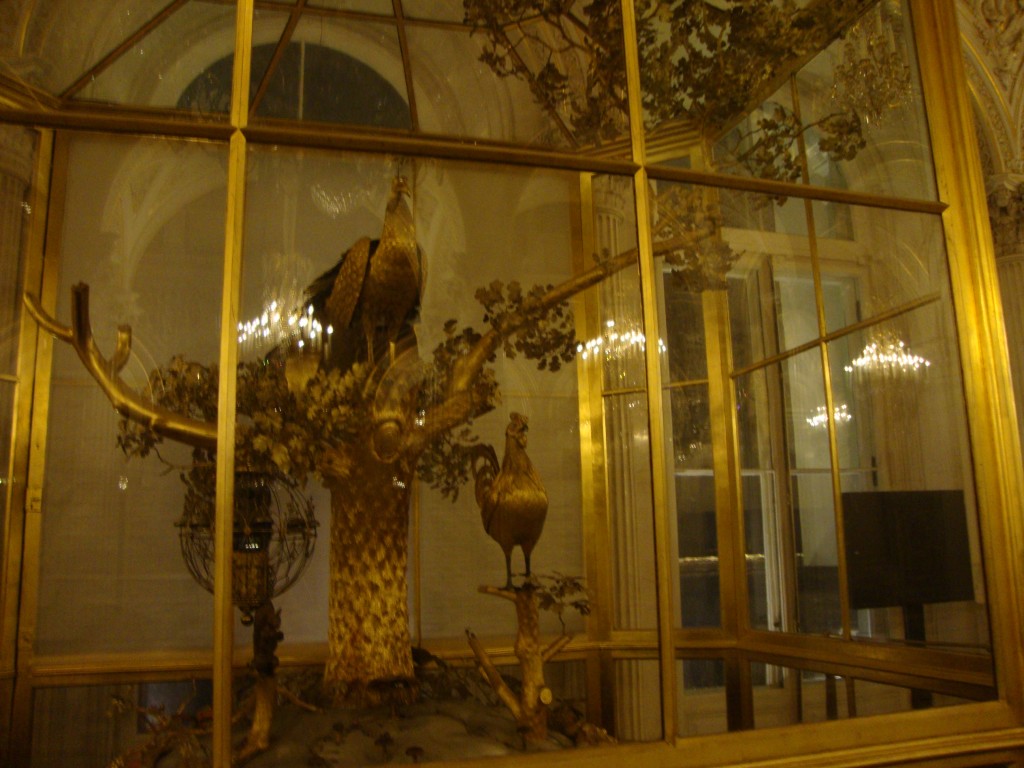 The Hermitage Peacock Clock is definitely one of the must-see pieces in the Hermitrage museum in St. Petersburg! And, those currently studying with Liden & Denz in Piter have certainly been there more than once (for ISIC card holder, it is free!). Inside the Pavillion Hall, on the first floor of the Northern Pavillion in Small Hermitage, you may have admired the wonderful collection of mosaics and taken a photo near the magnificent golden peacock, but.. Have you ever been there on Wednesday, in the evening, while the peacock clock is activated? Here you will find some information about this old but still working charmimg mechanism!

Symbolics behind the Hermitage Peacock Clock

Even while it is not in operation, this timepiece-automaton is extremely impressive: a peacock, a rooster, and an owl are depicted on an oak tree. Each of these birds have a lot of symbolism in art history: the owl is associated with night and darkness; the peacock is a symbol of the sun and the rooster symbolizes light, life, and resurrection.

But every Wednesday, at 7 o’clock, the elegant show starts: the owl turns its head to right and left, blinking its eyes and tapping its right foot and music begins to play on bells that are attached to the owl’s cage. The peacock then gracefully turns its neck, opening its beak, then spreads its tail and spins around to display its fan of golden feathers. After freezing for a second, the bird smoothly turns its tail to the viewers, returns to its starting position. After that the cockerel mechanism starts, with the rooster shaking its head several times and crowing. The cycle is meant to represent the end of night and the rise of the sun, suggesting the continuity of life and resurection. .

When looking at all of the details on this piece, one would never know that the elegant Peacock Clock was actually “recycled” from an already existing clock which depicted snakes. As a matter of fact, it was manufactured by the famous English automaten builder James Cox in 1777, under commission of Grigory Potemkin, who wanted to give it to Catherine the Great. In order to meet this expensive request as quickly as possible, Cox, whose financial affairs were currently not in the best of health, decided to use an existing mechanical peacock that featured in the Dublin lottery. He expanded the composition with a cockerel, owl and a clock mechanism with a dial incorporated into the head of a mushroom, and removed the snakes.

Since the 18th century it was been delighting visitors with its spectacle of three singing birds and is now the only large example of 18th century robotics to have survived unaltered into the 21st century.

This post was brought to you by Manuela, currently studying Russian at Liden and Denz