Renting a Car and Driving in Russia

If you’ve spent more than a few minutes on the internet, chances are you have seen a crazy dashcam video from Russia. It seems like it must be a nightmare to drive in Russia. I too was curious, and, I’ll admit it, a little bit nervous about driving in Russia. On a recent day trip from Saint Petersburg to Priozersk, and around the Ladoga Lake area, I decided to rent a car, and to make the drive. Here I will tell you all about the process of renting a car and driving in Russia.

My first piece of advice is to plan ahead. I was booking the car on Friday night, for Sunday morning. Almost every rental place did not have any cars available. Eventually I found one near Pulkovo airport that had one car available, a Volkswagen Polo. When researching for rental car places, make sure to read the reviews. There were a number of companies that had vehicles available, but had bad reviews about either the cars not being as advertised, or the rental company trying to get customers to pay for damage to the car that was already there when they first picked up the car. .

Side note about Russian driving laws. I do not have an International Driving Permit (IDP). I kept reading contradictory things about this, and whether or not I would be allowed to rent a car. I did take my regular Canadian driver’s licence, and get it translated. The translation was good enough for this particular rental company. I was not stopped by the police at all, so I can’t say whether a simple translation would be good enough for them.

Sunday morning comes, and I go to pick up the car. The man working goes through all the paperwork with me, I pay the deposit, which will be refunded after a couple of weeks provided I get no speeding tickets and adhere to their conditions (no faster than 130km/h, clean the car and fill up the gas tank before returning it, and I could only drive within Leningrad Oblast), and then I pay the rental fee. Rental fees and deposits vary from company to company, and depend on what type of car you rent. The deposit for the Polo was 5000₽, and the rental fee was 2400₽ for 24 hours. Him and I then head out to the car, and do a walk around. It’s orange, not what I was expecting but as the he told me “at least it’s not white like a taxi”. He then goes around, and marks down every little scratch, dent, and imperfection on the car. When renting a car anywhere, not just in Russia, insist that whoever you are renting the car from does this. Take pictures of everything too. This is for your protection, and also for theirs. Once the walk around was done, I signed the form, and was free to drive.

Honestly, driving in Russia was completely fine. The highways and main roads are very good, and Yandex Navigator is extremely helpful. As expected, there was a few things I was not accustomed to. Russian driver tended to be more aggressive than what I am used to, but at no point did I feel unsafe or in danger. Some of the side roads were not very good. There were a couple stretches of road that were unpaved for several kilometers, and others that were littered with potholes. While it was inconvenient to drive on these roads, these were only side roads and can be easily avoided. 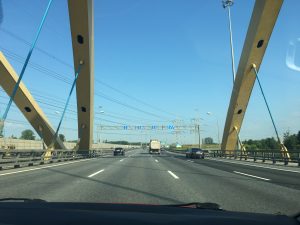 The main roads, and highways, out of and into Saint Petersburg are well paved

Driving back, I took the ЗСД through the city. There was a fair amount of traffic, but it never came to a complete halt. I also passed through three toll booths in just a short distance. The first one charged 100₽, and the next two charged 200₽ each. There did not seem to be a way around the tolls, even saving the receipt from one and presenting it at the other I still had to pay. I arrive at a gas station, and after going into the station to pay for gas I learned that you fill up the car and then pay. In Canada, and from my experience the USA as well, you pay first and then fill up. Gas was around 45₽ per litre, if I did not fill it up the rental company charged 60₽ per litre taken from the deposit. Right next to the rental company was a car wash. A wash was 150₽ and the rental company would have charged 800₽ had I returned the car dirty.

Overall, the process of renting a car in Russia is pretty straightforward and easy. Driving is a little nerve wracking at first, but once you get used to the aggressive Russian driving tactics there is nothing to fear. I even started to be able to predict when somebody was going to cut in front of me at the last second. While I only drove for a few hours total, and mostly in small towns, back roads, and highways, I enjoyed driving in Russia. I can definitely see myself renting a car again in the future here, but next time I’ll have to drive down Nevsky Prospekt at rush hour.