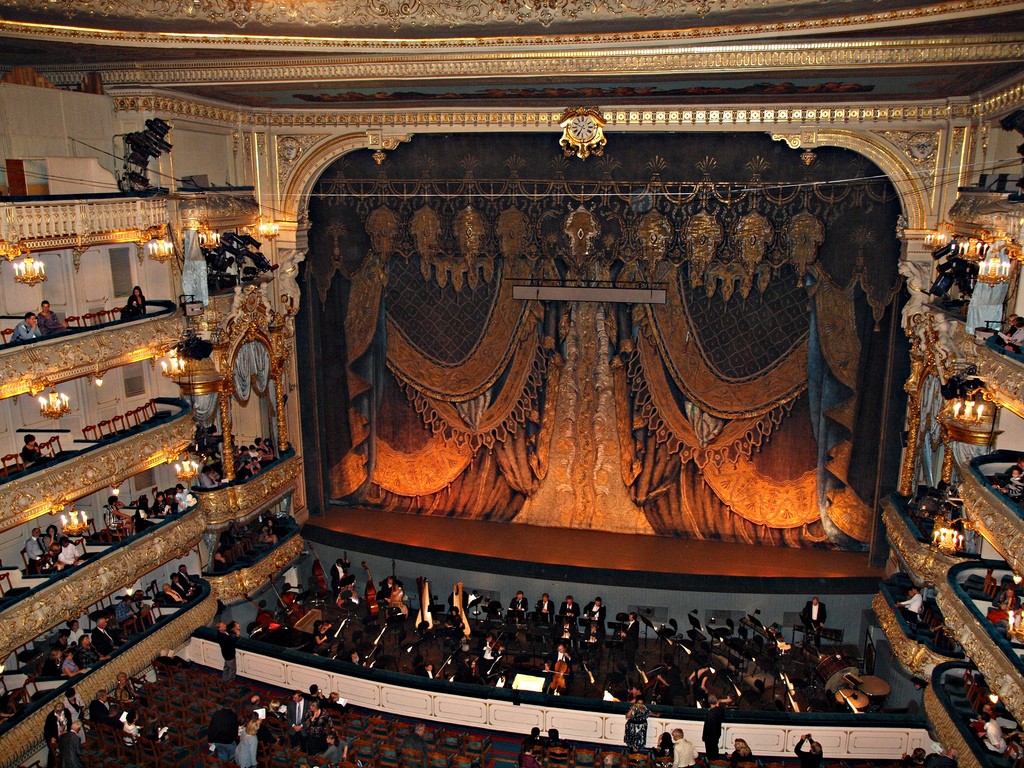 When I first came to Russia I didn’t go to a ballet, unfortunately even the second time, and the third one I didn’t make it as well, so the fourth time I definitely wanted to go, one way or another. Everyday I passed by the Aleksandrinsky and Mikhailovsky Theater to go to school and everybody kept telling me about this stunning Marinsky Theater and finally I succeeded in watching a ballet in all of them. They are all amazing but I have to admit that the one that impressed me more was the Marinsky even if the Alesandrinsky was the most comfortable of them all.

Aleksandrinsky Theater is the oldest national theater in Russia and it is named to the UNESCO World Heritage List. It was founded on August 30, 1756, the day of Saint Aleksandr Nevsky and this day is considered the birthday of the Russian professional theater. From the 18th to the 20th century it was the main imperial theater. The theater was built according to a project of the architect Carlo Rossi and named Alexandrinsky in the honor of Alexandra Fedorovna, wife of the Emperor Nikolay I. In Alexandrinsky took place the premieres of all Russian dramas; a huge number of famous actors, theater directors, and great artists and composers worked in this theater which could be considered as a symbol of the Russian national theater. Between 2005 and 2006 it undergone a reconstruction that restored its historical interiors. Inside it’s really huge and decorated in red and gold. Aleksandrinsky has also the most comfortable seats and enough space to move easily around them. Besides it’s located in the really city center just some meters away from Nevsky prospekt.

The history of the Mariinsky Theater ensemble dates back to the 1783, when the Bolshoi Stone Theater was opened on Carousel Square on 5 October. The theater built by Antonio Rinaldi impressed with its huge dimensions and majestic architecture; in addition were equipped with the most advanced machinery of the time. In 1802-1803 the architect Thomas de Thomon led the reconstruction of the theater, altering the external appearance and structure. But we finally come to the contemporary structure thanks to Alberto Cavos’ job. In 1836 the architect improved Bolshoy’s acoustic, gave the auditorium a horse-shoe shape and increased the capacity. The Circus Theater, that was located on the opposite side of the Bolshoy, was destroyed by a fire. On its side Cavos built a new theater in 1859: the Mariinsky Theater, in honor of Empress Maria Alexandrovna, wife of Alexander II. The theater went through several reconstructions and then when the Bolshoi Theater turned into the St Petersburg Conservatoire, all productions and ballets were transferred to the Mariinsky. This theater is definitely the most astonishing one. Its impressive structure already suggests you the beauty you’ll find inside, where the interiors are richly decorated in green and gold.

The Mikhailovsky Theater was commissioned to Alexander Brullov, who had to design a new theater building that was supposing to match the existing ensemble of Mikhailovsky Square. The theater opened on 8 November,1833 and was named after the Grand Duke Michael Pavlovich of Russia. In 1859 it was renovated and increased in capacity by Albert Cavos. In those same years part or the Mariinsky’s performances were transferred to the Mikhailovsky and after then the theater started to be considered a real opera house. Eventually in 1963 it received the official status of Opera and Ballet Theater. The Mikhailovsky Theater is the smallest of those three but as Aleksandrinsky is located in a really convenient place, just some meters away from Nevsky Prospekt. And even if it’s smaller its rich red and gold interiors won’t let you down!