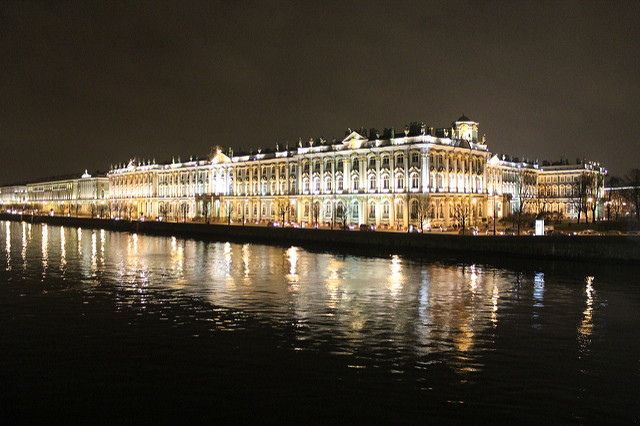 The Imperial Russian monarchy, far from residing in one singular dwelling, lived in a variety of locations in accordance with each Emperor’s or Empress’ tastes and preferences. The Tsars also commissioned for new palaces to be built for themselves, as well as using those of their predecessors. Here are 6 of the palaces that were the most popular amongst the Imperial family since the creation of the Russian Empire under Peter the Great:

Other than a brief interlude (1728-32), the Winter Palace was the official residence of the Russian Monarchy from the moment that Peter the Great moved the capital to St Petersburg. Comprising some 1,500 rooms, the palace was designed and built to reflect the might and power of Imperial Russia, and is a stunning example of the baroque style that Peter built the rest of his city with, in plain rejection of the traditional Byzantine-influenced Russian architecture which had preceded it.

Few Tsars chose to reside here all year round, instead mostly staying in the palace during the season from which it gets its name, and preferring an alternative summer residence. Nevertheless it played a key role in providing the location for all major state visits and occasions, and thus was seen as the centre of the Empire. However, owing to its very central location within St Petersburg itself, several Tsars became worried of the threats to their safety, and the last Tsar to truly reside there was Alexander II (reigned 1855-1881), with his successor judging that an out of town location would better protect him against the rising discontent with the monarchy. 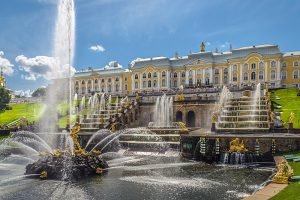 Commissioned by the Tsar who gave it his name, Peter the Great’s creation is perhaps most renowned for its gardens, for which it is often dubbed the “Russian Versailles”, rather than the palace itself, which only comprises 30 rooms. However even this was too big for Peter, who was known to dislike living in large extravagant edifices, and as a result he also built a  smaller palace for himself on the same site; Monplaisir. Subsequent Tsars who resided here had the palace expanded to its current size in order to accommodate their more exuberant tastes. This was mainly completed by Empress Elizabeth, Peter’s daughter, who made Peterhof her main summer residence. Furthermore Peterhof was also a favourite of both Nicholas I and Nicholas II, but few other noteworthy rulers frequented this palace to any great degree. 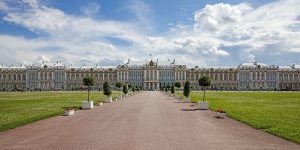 This residence is often associated with Empress Catherine the Great (Catherine II), however confusingly it was Catherine I, the wife of Peter the Great, who commissioned it to be built for her own use. Her daughter, Empress Elizabeth, found it much too outdated and ordered it to be demolished and rebuilt in the extravagant and exuberantly decorative Rococo style, but these were halted when Catherine the Great came to power, who was horrified at the expense of the renovations and instead redeveloped several parts of it in a more conservative neoclassical style. Despite being one of the largest palaces in the St Petersburg area, this palace was mostly shuned by the monarchs who succeeded Catherine, the one exception being her grandson Alexander I, and after his reign, was in effect abandoned by the Imperial family. 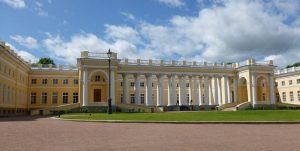 Adjacent to the Catherine Palace at Tsarskoye Selo, this neoclassical residence was built by Catherine the Great for her grandson, the future Alexander I,  yet upon his ascension to the throne, he preferred his grandmother’s palace to his own. He instead turned it over to his brother, who would go on to be Nicholas I, and who carried out a number of extensive renovating projects. However the Alexander Palace is perhaps most famously remembered as the favourite residence of Nicholas II, who made it his permanent home after the Bloody Sunday events of 1905 due to its secluded location away from the centre of St Petersburg. It was here that he and his family were placed under house arrest after the Tsar’s abdication and the events of the February 1917 revolution, before being eventually transferred to Siberia. This palace was, therefore, the last ever Imperial residence. 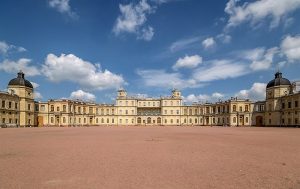 Another palace commissioned by Catherine the Great, it was originally intended for Count Grigory Grigoryevich, a favourite of her’s. It is rumoured the palace was a gift for his role in the coup d’état which resulted in the death of Tsar Peter II,  and which placed Catherine on the throne. Typical of the classical style as well as incorporating themes from medieval castles, Catherine liked the palace so much that she bought it off the Count’s heirs after his death and instead gave it to her son, who would go on to succeed her as Emperor Paul I, despite the fact she had already built him a palace in the form of Pavlovsk. After Paul made it an official imperial residence, it was to become a firm favourite amongst future monarchs, most notably Emperor Alexander III who made it his summer home. 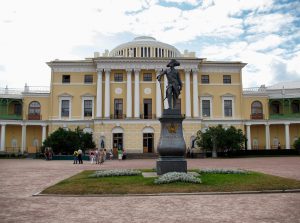 Yet another residence commissioned by Catherine the Great, and located not far from her main palace at Tsarskoe Selo, this palace was intended for her son Paul, to celebrate the birth of his son the future Emperor Alexander I. Whilst it was under construction, Paul and his wife went travelling to Europe, to such countries as Austria, Italy, France and Germany, and filled their palace with objects and inspiration they came across over the course of the trip. An order for two hundred pieces of furniture from Paris and a large collection of antique marbles and statues from Pompei were amongst the European influences that the Emperor and his wife adorned Pavlosk with. The palace quickly earned a reputation for the vast collection of art that the royal couple amassed within it, and during the 1800s became a hub for prominent writers and poets of the age. However after the Emperor’s death the palace became the residence of his widow and was avoided by subsequent monarchs for this reason.

So there you have it – 6 of the most important residences of the Russian monarchy. Let us know if you would have chosen differently in the comments below!

Привет! I'm Louis and I am interning at Liden and Denz during my year abroad. I study Spanish and Russian at Cambridge University and am looking forward to getting to know St Petersburg and all its wonders!