Everyone knows the name Nevsky: from Nevsky Prospect in St Petersburg to the various cathedrals named after Alexander Nevsky across the country. 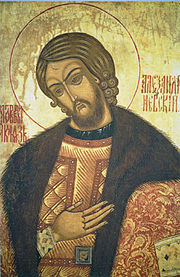 Born on the 30th of May in 1220, Alexander Nevsky was the Prince of Novgorod, Grand Prince of Kiev and Grand Prince of Vladimir. He rose to legendary status thanks to his military victories over the German and Swedish invaders and was in 2008, voted the greatest Russian in the Name of Russia television poll.

Alexander was the second son of Prince Yaroslav Vsevolodovich and it seemed unlikely that he’d ever claim the throne of Vladimir so was sent into the military. When the Swedish army landed on the banks of the river Neva in 1240, Alexander and his small army attacked them and defeated them, saving Russia from a full-scale invasion from the North. Because of his success, Alexander was named “Nevsky”, which means “of the Neva”.

Although he spent some years in exile, when he returned he achieved more military victories and continued to strengthen Russia’s Northwest. He sent envoys to Norway and signed a peace treaty between Russia and Norway in 1251. He led his army to Finland and once again defeated the Swedish troops, who were trying to block the Baltic Sea from the Russians in 1256.

Alexander turned out to be a very cautious and clever politician and protected scattered principalities of what would become Russia from repeated invasions by the Mongol army.

In 1252, Alexander was named the Grand Prince of Vladimir, thanks to his powerful friends, but just a decade later, died in Gorodets-on-the-Volga on his way back from travelling. Before his death however, he took monastic vows and was given the religious name “Alexis”.

He was buried in Vladimir, in the Great Abbey at the Church of the Nativity of the Holy Mother of God. He left behind at least five children.

Since his death, Alexander Nevsky’s legacy is still felt across the country, having been canonized by the Russian Orthodox Church in 1547, leading to a feast day in his name on the 23rd of November. One of the highest decorations in the country is the Imperial Order of St. Alexander Nevsky, introduced by Catherine I in 1725. There are countless churches named after him, not just in Russia but in Bulgaria, Estonia, Serbia and Georgia.

His most popular quote, “Whoever will come to us with a sword, from a sword will perish”, has become a slogan of Russian patriots and there’s a long tradition of Russian ships bearing his name and quote.

If all of this wasn’t enough, Alexander Nevsky was also declared “the main hero of Russia’s history”, in 2008.