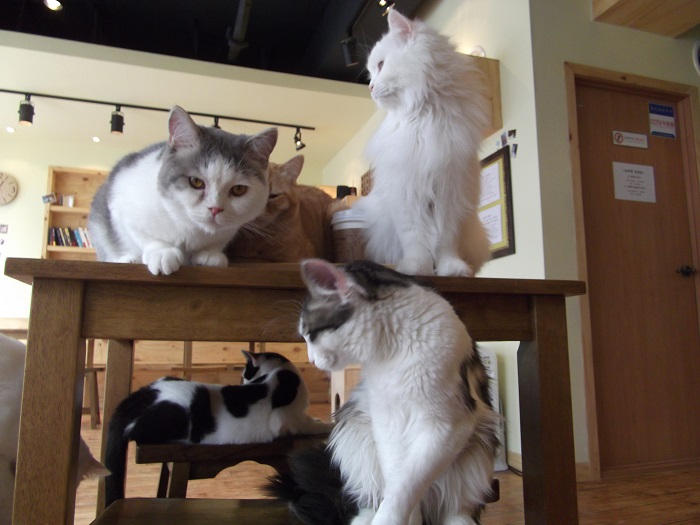 Are you a cat person or a dog person? If you count yourself among the latter, this might not be the post for you. If you, however, are a true feline-fan you will be glad to hear that the subject of the day is Cats. Or more precisely: The new Cat Café in Moscow.

Cat Cafés, if you are not familiar with the term, is a place where people go mainly to hang out with cats and not mainly for drinking coffee. The Café usually has a bunch of “live-in cats” catering for the customers – or vice versa.

The first ever Cat Café opened in 1998 in Taipei, Taiwan. The concept, however, turned out to be more popular in Japan where the first café was opened in 2005. Since then, some 80 cafés have opened only in Japan. The popularity even reached other countries such as Singapore, the UK and even Lithuania (which would probably mean that Lithuania has the most Cafés per capita).

The Café in Moscow opened this spring, and gives you the opportunity to relax with a nice cup of coffee or tea together with some furry friends. This marks the opening of the first Cat Café in Moscow. Yekaterinburg, Samara, Krasnoyarsk and St Petersburg quite surprisingly saw Cat Cafés before Moscow.

Котики и люди, or ”Cats and people” as the Café is called is unique in one way. The Café operates together with an animal charity. The cats living at the Café are thus all rescued in some way from the streets, or previous homes. According to the owners, the cats get more medical check-ups than Cosmonauts. Accordingly, all cats are well looked after, vaccinated, neutered and chipped.

This also means that all the cats are up for adoption. However, the adoption-procedure is notoriously strict. A new home for one of the cats should not only be a new home, but also a forever-home.

The Café is open daily between 10.00 and 22.00. You pay only for the time spent, coffee, tea and snacks are included.

Photo by Mouselinguist under CC-BY-SA 3.0