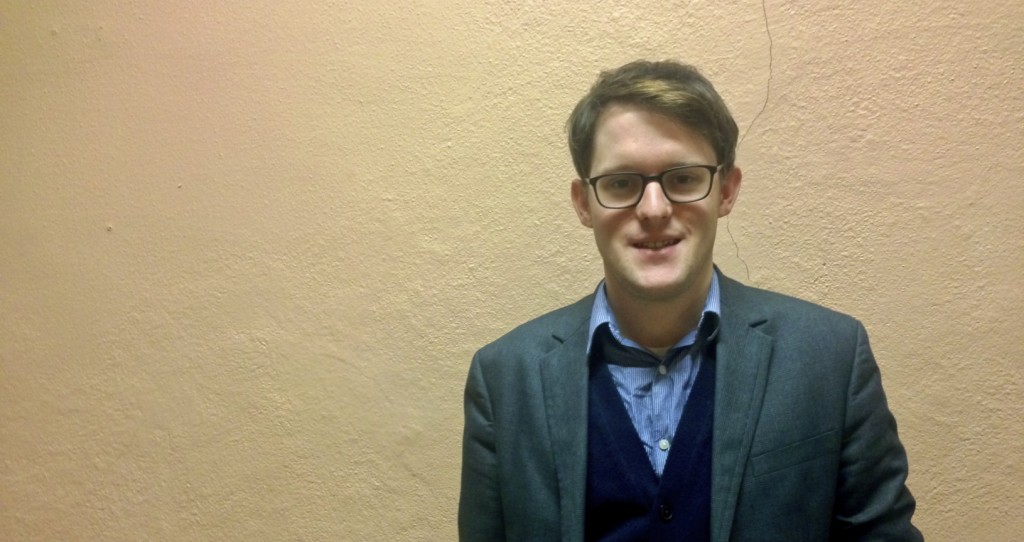 Matthew Holehouse is currently a student at our St.Petersburg language center. He is a 27 year old journalist from London, currently working as the political corespondent for the Daily Telegraph.

How did you come up with idea to learn Russian, and why?

I sort of wanted something to do with my Saturdays, is basically the long and the short of it. I thought it looked like an interesting challenge, which was true. Why did I? It was literally wanting to do something different. I had already lived in London for about two years at that point and had done most things you can do on a Saturday, and there’s a really good school in London called the Pushkin House. It’s absolutely tremendous. So I started learning there. And it’s really rigorous in grammar, you know, so in theory if you do the course your grammar should be good. But why did I come here? I got the sense that I really can’t do it by doing two hours a week. I need to use it, put it into action, immerse myself, and consolidate everything I knew and make sure it was nailed to the floor.

What do you find to be easy or difficult about Russian, especially now that you’re here, are there challenges that you’re facing?

What is both easy and hard about it is that it has this complicated internal logic. But once you work out how that works it’s quite doable. There are a lot of patterns. The same prefixes and suffixes and rules reoccur, kind of like clockwork. Once you get a feeling for how the rules work you can sort of get on top of it.

You’ve only been here for about a week and a half, but can you share how you feel about your stay in St.Petersburg so far?

Yeah you know, I’ve only been here about a week, it’s been pretty chilled out. If you do your research there are some good cafes and restaurants, there are some good places to eat. It’s a bit like London, when you go to the center of London and there are hundreds of restaurants- don’t go to any of them. They’re all horrible. They’re all like tourist restaurants, I think that all big cities are the same. There are an awful lot of bad places where you’ll get bad food because you’re a tourist. If you do your research there are some really good places to eat. You do really have to be a tourist and go to churches and museums because they are awesome. You don’t need to buy a red army hat or a t-shirt with Putin on it, that’s not obligatory, but some things are definitely worth seeing.

What advantages will knowing Russian bring to your professional career, if there are any?

That’s a good question, you know there are a lot of journalists working in Russia and in Russian which I do have very occasional interaction with. But I just think that it will be a handy thing to have. Were I, hypothetically, as a journalist wanting to go to Russia for an interview it would be helpful. However, I think that it is really important to have things in your life that you do for entirely non-professional reasons. It’s important to do things that you make no profit from. But, with that being said, there are a lot of Russians in London doing interesting things, so I’m sure I will put it to use eventually.

Would you like to further develop your skills in Russian, and if so, what is your motivation for doing so? Could you imagine yourself living or working in Russia in the future?

I will definitely stick at it. I like studying in London, it’s really good. I could imagine coming back here and doing another fast course, a few weeks. I feel like I’ve gotten to the point of no return now, where I’ve gone far enough where it makes sense to keep on going now. And this has been good to sort of reassure myself that this is going somewhere and this has a purpose.

Some people say that Russian is an “exotic” language, how do you feel about that statement?

It doesn’t feel very exotic, but that’s probably the weather. I mean it is exotic in that it isn’t spoken by a huge number of people, which is nice. It’s not like French or Spanish where there is a huge amount of overlap and there’s a lot of people who know a bit about it. So yeah, it probably is.

What impressions has Russia made on you so far? Anything culturally? Or can you compare it to any other travels?

I think it’s interesting to be here during the 71st anniversary of the blockade, so it’s sort of a cultural moment, appreciating how important that is to the city and the Russian people. And that comes out at the time of the blockade, you have the memory of that. The impressions, in the very literal sense, that it has left on the people and the city. That you don’t really appreciate that until you come here, it’s very difficult to compare.

Everyone has been very friendly, very keen to help you, very nice. You know, Russia doesn’t have a reputation for being really friendly, in the way that other countries do, but I think that that is undeserved. Or rather there is a reputation to be deserved that it doesn’t have yet.