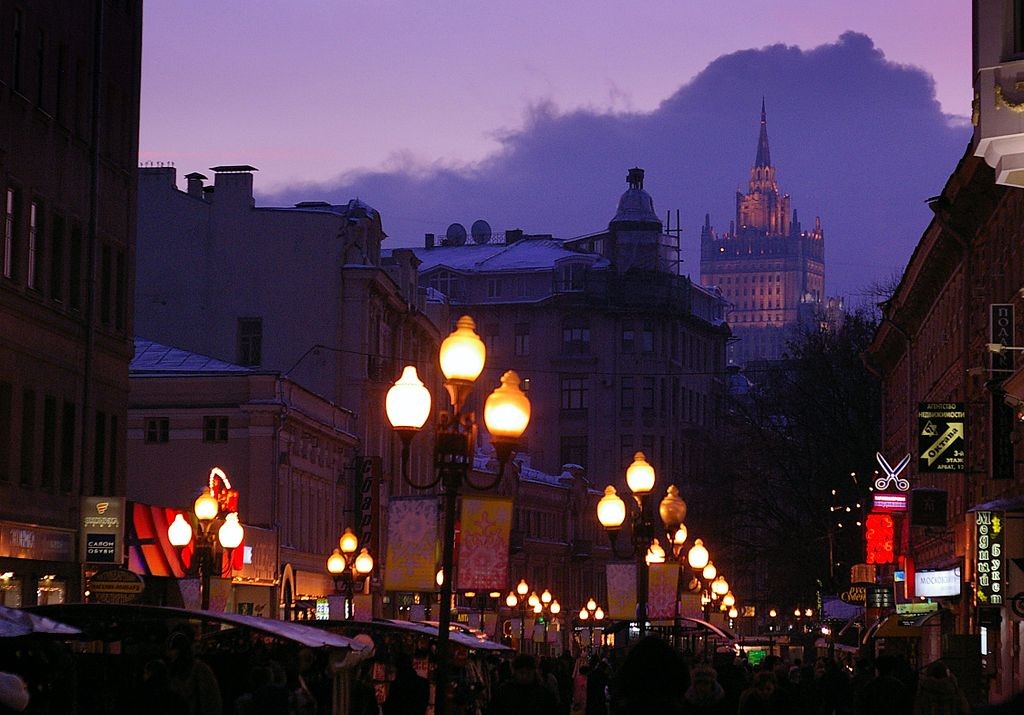 I spent the past weekend exploring Moscow — a great experience which I’m glad I had during my time in Russia! Of course it’s impossible to see very much of this enormous city in just a few days, but one sight we definitely wanted to check out was Arbat Street (Улица Арват).

The Arbat is one of the most famous streets in Moscow as well as one of the oldest — the earliest mention of the street is from the 1400s. The origin of its name is actually unknown. One hypothesis is that this came from an Arabic word for “suburb”, and another suggests that it evolved from a Tatar word for “cart”. The street is located in the historic center and stretches between Arbatskaya Square (Арбатская площадь) and Smolenskaya Square (Смоленская площадь).

Centuries ago, the Arbat linked Moscow with the western regions and was popular among tradespeople. Today, the Novy Arbat (Новый Арбат) serves as a main road and the original street, now known as Stary Arbat (Старый Арбат), has been designated for pedestrians.

This is a great place to visit for fans of Russian literature, as it is referenced in several classic novels, from Bulgakov’s The Master & Margarita to Tolstoy’s War & Peace. In the nineteenth century the street was also popular among artists, musicians, and writers. Andrey Bely lived on this street, and Pushkin also stayed here for a short period of time.

Walking down the Arbat is certainly a trip through Moscow’s history, but you may be in for a bit of a surprise when you arrive — most of the street now belongs to cafe chains and souvenir shops. I was particularly surprised to find a Dunkin’ Donuts here! However, it’s still pleasant to walk along a “quieter” pedestrian street in the middle of bustling Moscow. You can also see some other unique sights here, such as a fountain and statue of Princess Turandot in front of the Vakhtangov Theater.