In the first of our two-part guide to Moscow architecture, we take a look at some of the most iconic designs which never left the drawing board.

Moscow’s architecture is astonishingly rich and diverse, however few people know about the parallel history which runs, invisible, alongside the city streets and squares. In today’s blog we delve into the fascinating story of ‘paper architecture’ – those designs which never made it past the blueprint stage. Given the utopian ambition of the Soviet project, Moscow has a rich reserve of designs which never saw the light of day. Here are four of the most famous examples of architecture whose ambition superseded actuality.

1. The Palace of the Soviets 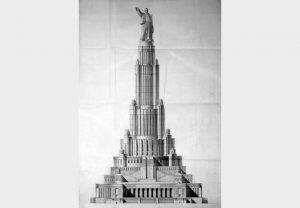 Many people know the story of the Cathedral of Christ the Saviour; that it was destroyed by Stalin in 1931 only to be rebuilt in 1991. But did you know about the building that was planned to replace it? The same year that he ordered the destruction of the temple Stalin launched one of the most over-ambitious architectural projects of all time; he held a national competition to design a ‘Palace of the Soviets’. Boris Iofan was selected as the winner out of hundreds of submissions, for what is now known as ‘wedding-cake’ style of architecture. The Palace of the Soviets was planned to be the tallest building in the world, topped by a statue of Lenin which itself was to be taller than the Statue of Liberty. Like so many Soviet projects, however, it proved impossible to convert aspiration to concrete. The building of the palace was delayed and delayed until eventually it was decided that the space were the Cathedral once stood be transformed into a simpler structure instead… a swimming pool. 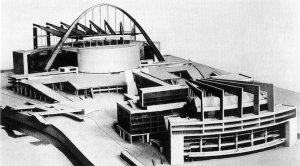 The original ‘starchitect’, Le Corbusier is perhaps the most influential name in twentieth-century architectural history. But few people know that the Swiss was also heavily involved with the USSR in its early days. A devout socialist, he believed in the communist cause and visited Moscow multiple times, whilst designing many buildings for the city, which he envisaged would held the new style of communal living. He even entered the above-mentioned competition to design the Palace of the Soviets, for which he submitted a stunning a modernist masterpiece – a sprawling centre of brutalist concrete. Sadly Stalin couldn’t see the appeal and soon after Le Corbusier left Russia for good. 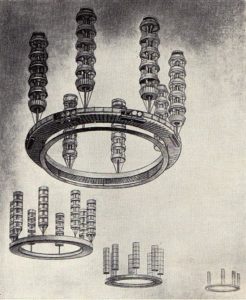 Really the only fitting phrase to describe Grigory Krutikov’s architectural career is, well, ‘cray-cray’. Eighteen years old at the outbreak of the revolution, he trained in Vkhutemas, the famous Constructivist architectural school and rarely has any design embodied youthful zeal more than his ‘Flying City’ plan. Swept away with revolutionary fervour and delirious with optimism to the point of delusion, Krutikov truly believed that science would soon solve all humanities problems and that Soviet engineers would be able to fashion his impossible designs to life. He designed a series of hover-craft buildings complete with individual rockets for residents. Truly a testament to technocratic belief, if any image embodies early Soviet sci-fi, it’s these. 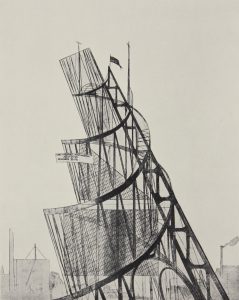 The most iconic example of paper architecture of all time is surely Tatlin’s Tower. Designed by avant-garde artist Vladimir Tatlin, this tower was also planned to be the biggest in the world (a recurring theme you may have noticed – size mattered to the Soviets). The ziggernaut  was intended to straddle the river Neva and spiral up into the clouds in a dynamic design of corkscrew metal. The building’s bright red cage was meant to encase suspended glass offices for government officials which were to be built out of mechanically rotating glass cubes. If that sounds improbable enough, bear in mind that this design was made almost a century ago – during a time of such material shortage that there weren’t even enough nails in St. Petersburg to build its miniature wooden maquette. Tatlin’s tower may have never been built, but it has gone down in time as a testament to the impossible, and its legacy continues to inspire and awe today.

This blog was brought to you by Kamila, currently studying Russian at Liden & Denz Moscow