The Museum of the Petersburg Avangarde.

Saint Petersburg has been, since its foundation, the Russian capital of intellectuals, artists, musicians, poets and writers – the so-called intelligentsia.

In the early 1900s, winds of change were blowing all over Russia, and especially in the capitals. Russia, too, had its own avant-garde movement, grouped under the header of Futurism, and in ways inspired by the Italian (Fascist) Futurists, but it was later to become quite different from the other contemporary art movements in Western Europe: the latter’s artists had been far more traumatized by the futility of the bloodbath of World War I (Lenin and the Bolsheviks had withdrawn from the conflict – one of the main reasons for their success), and were beginning to show signs of deep concern about the looming of the Second. Instead, the Russian avant-garde of the 1920s was full of bright optimism and dominated by the ideals of equality and progress which (along with the ruthless Red Terror of the Bolsheviks) were driving the Sovietization of Eastern Europe at the time. 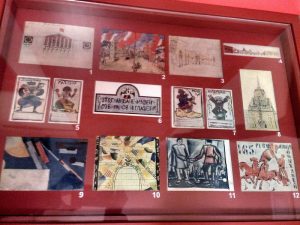 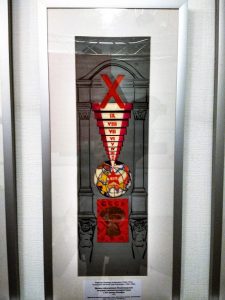 Art and propaganda would merge seamlessly in the works of the first avant-garde, freeing itself from the formalist constraints of aristocratic taste to experiment with light, sound, geometry and colors, pushing the limits of the imagination to create something bold and revolutionary. Many of the exponents of this wave gathered in the Literary Foundation – an artists’ hotel in which the painter, musician, composer and theoretician Mikhail Vasilyevich Matyushin (1861-1934) and his wife, the French painter and poetess Yelena Guro (1877–1913) rented rooms.

Today, the charming wooden house (rebuilt in 2006 along the original model) on Petrogradsky Ostrov hosts the Museum of the Saint Petersburg Avantgarde, known as “Dom Matyushina.”
When we visited, we were fortunate enough to be invited on a full guided tour, in the course of which we gained insight into how incredibly versatile and productive Matyushi and his wife were, and how eccentric the whole circle of the Petersburg/Leningrad avant-garde was, mocking the old culture, for instance, by wearing carrots for ties and stuffing cabbage leaves in their breast pockets in lieu of handkerchiefs, and drawing primitive and mystical symbols on their faces. The first floor hosts the gallery of photos of the most famous representatives of the movement (including the great poet Mayakovsky and the painter Filonov), and of their incredible work for socialist propaganda posters and parade carts. 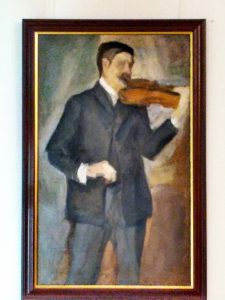 The second floor is more dominated by Matyushin and his wife’s other artistic endeavors both before and after the Revolution. Paintings, musical compositions (Matyushin composed the music for one of the first Futurist operas, Victory Over the Sun, 1913), pamphlets, children’s books, and Matyushin’s wood carvings and tools are all on display, mingled with the works of countless others, and so much material is preserved that two of the walls are actually made of layered sliding panels to fit more material. Particularly impressive, to me, was the display at the end of the tour – of Matyushin’s visionary studies in the representation of music through colors, aiming to demonstrate the existence of a fourth dimension. 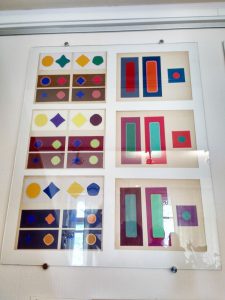 Although the exhibition is entirely in Russian, the photos and paintings alone are enough to convey the breadth of the inspiration of these visionary artists.