Into The Hatch: A Guided Tour of Bunker 42

Location: 5 minute walk from Taganskaya Station on the Circle Line

Yesterday, Liden & Denz sent a group of students to explore the depths of Bunker 42, a private Cold War-Era Museum that allow visitors to get a glimpse into the Command Centre for Strategic Services. The Bunker’s four main compartments are located 65 metres (or 284 steps) below ground. It takes a few short minutes to descend the 18 stories to the main operating floor. Construction began in 1947 and was finally completed in 1956. A total of 600 people worked in the 7000 metre-squared space until 1985. 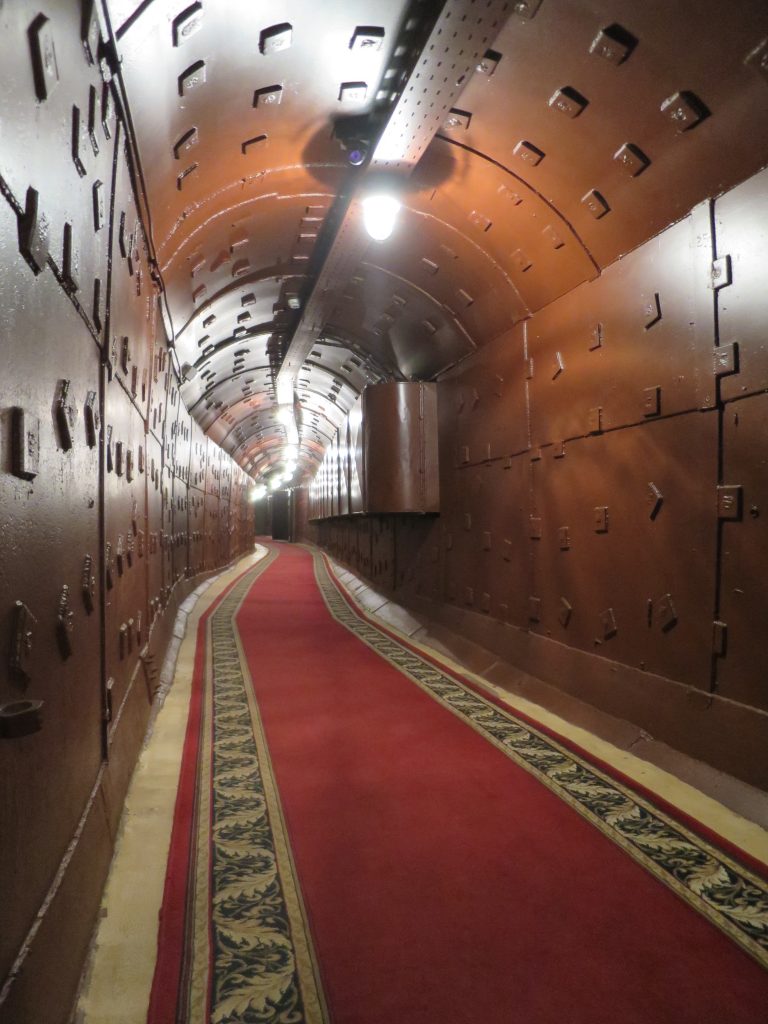 The main corridor leading to the Command Centre.

A town accommodating 45,000 people could have been built with the total amount of spent on the project!

The walls of the Bunker 42 are 6 feet thick, constructed to withstand nuclear fallout and radiation. How did they decide how deep to build the bunker? Tests were conducted by burying capsules with animals at various depths in the ground and then bombing those areas, and only the animals at a 65-metre depth survived. (I’m sure PETA would be thrilled with this).

When we went into the main Command Centre, our guide asked for two volunteers. Another student and myself stepped up, and it turns out we had volunteered to participate in a re-enactment of a nuclear bomb detonation. With a simple code and the coordinated turns of a few keys and the push of a button, we watched on the screen as a bomb was dropped on an unspecified city (possibility New York judging from the skyscrapers) and the fallout from this bomb. 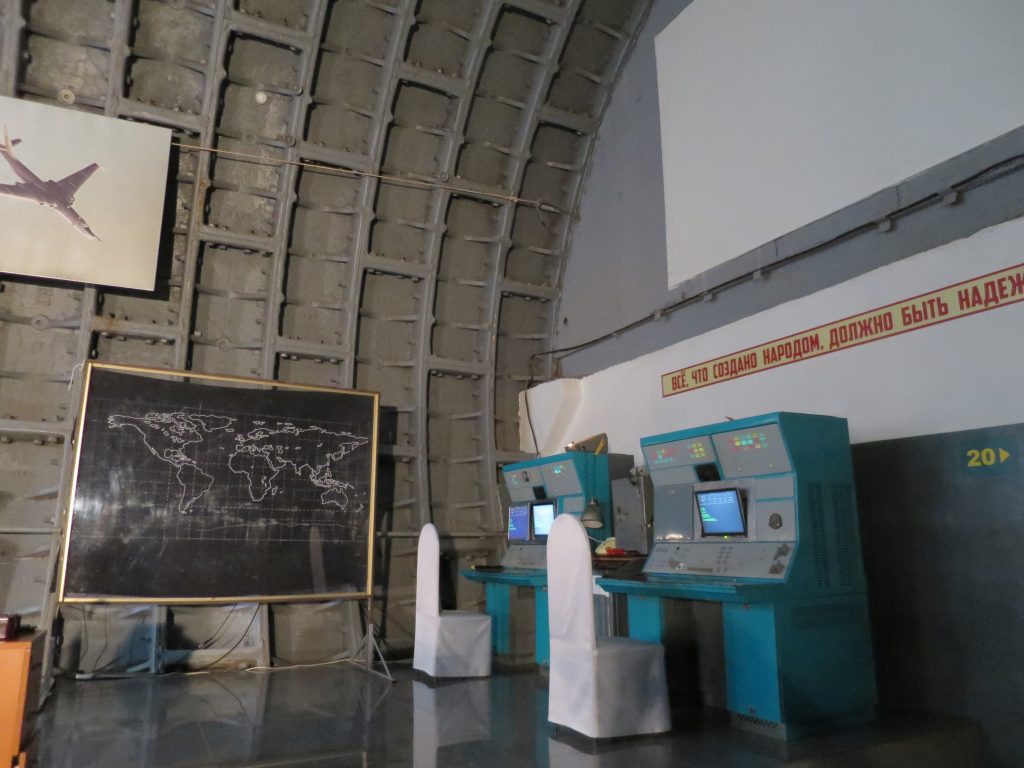 To say it left most of the group disconcerted would be an understatement.

We then went on to a room where photos were no longer allowed. Here, we saw the switchboards which controlled communication across the entire Soviet Union, as well as relics and information regarding the Cuban Missile Crisis. This room was the most interesting, mainly from a technological perspective, though it makes you wonder what sort of activities take place in Intelligence Agencies all around the world with the technology that is now available. 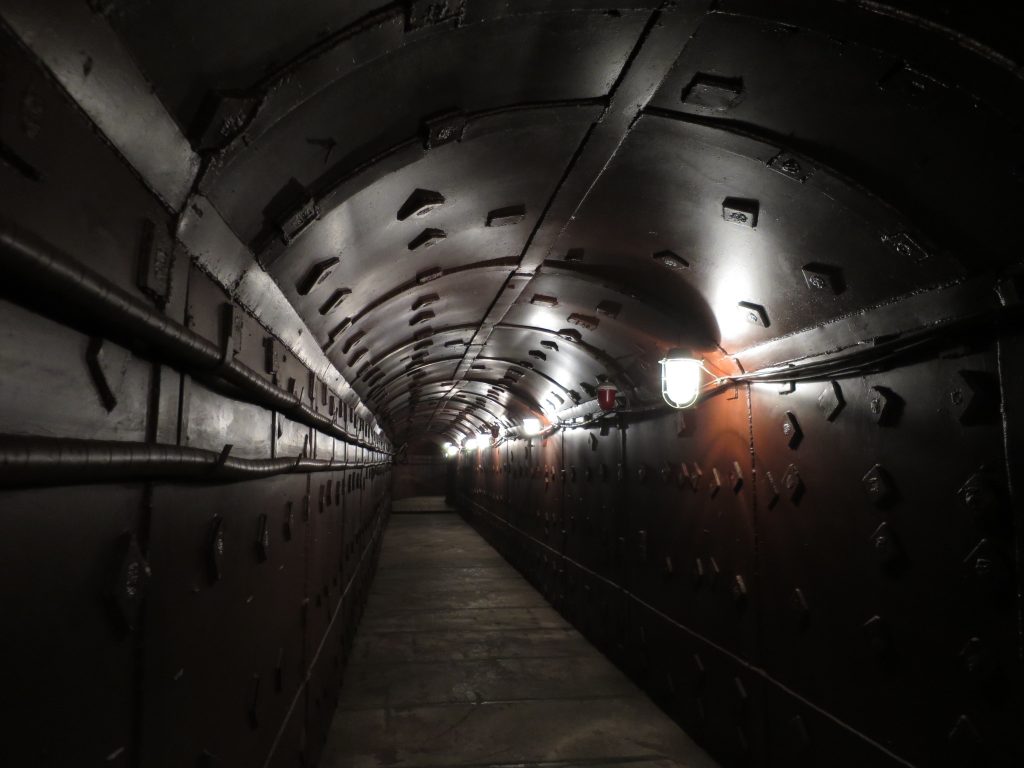 Further on, the guide invited to head deeper into one of the tunnels which connected the Centre to Taganskaya Subway Station. This tunnel was used by some of the workers to sneak into the subway for their daily commute. We could hear the trains passing us throughout the entire tour.

It’s troublesome to think of how close regular folks are to what was potentially the most powerful place in Russia.

Once in the subway tunnel, our guide shut the door, and the lights went out. All of a sudden, an alarm blared and red lights started flashing.  A recording came on, announcing that Moscow had been attacked. and that we’d be locked into the tunnel until further notice. 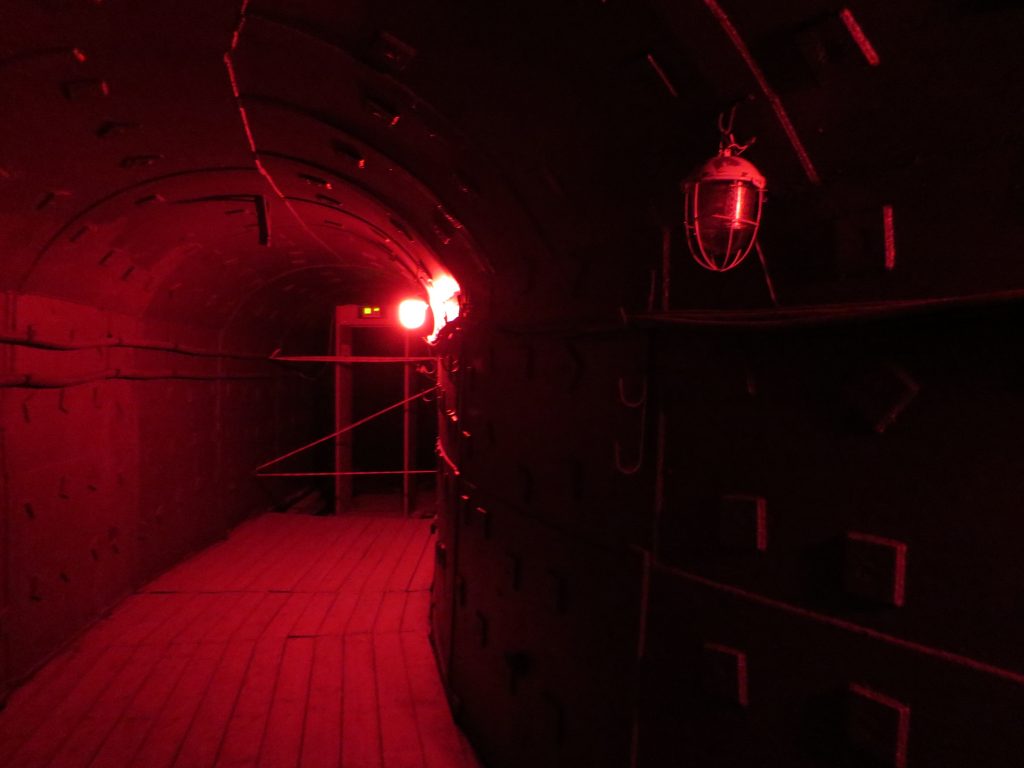 The entire experience was mind-boggling. I’m not sure I would necessarily recommend it to visitors. For Cold War and History Buffs, it might be interesting to see the culture of fear that pervaded the time and reflect on how far global relations have come since then.

Officially, only four bunkers exist in Moscow proper. However, some say there may be up to 60 bunkers scattered through the city, and claim the Circle Line actually has a bunker at every station. We might never know. 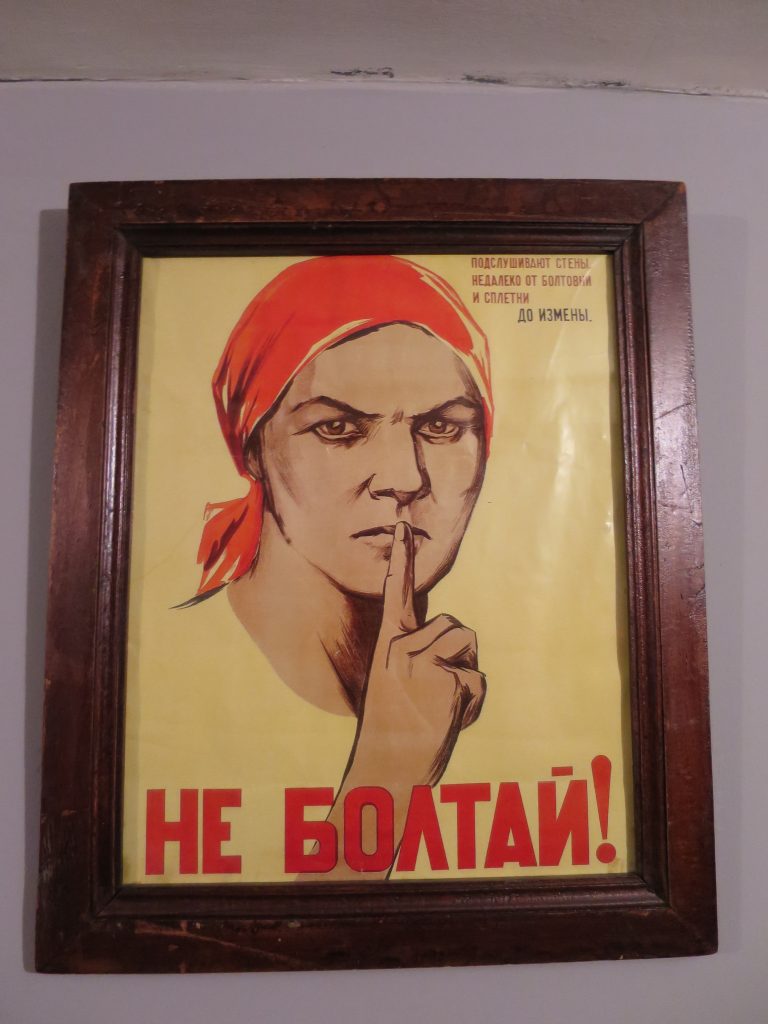 A replica of a nuclear bomb. 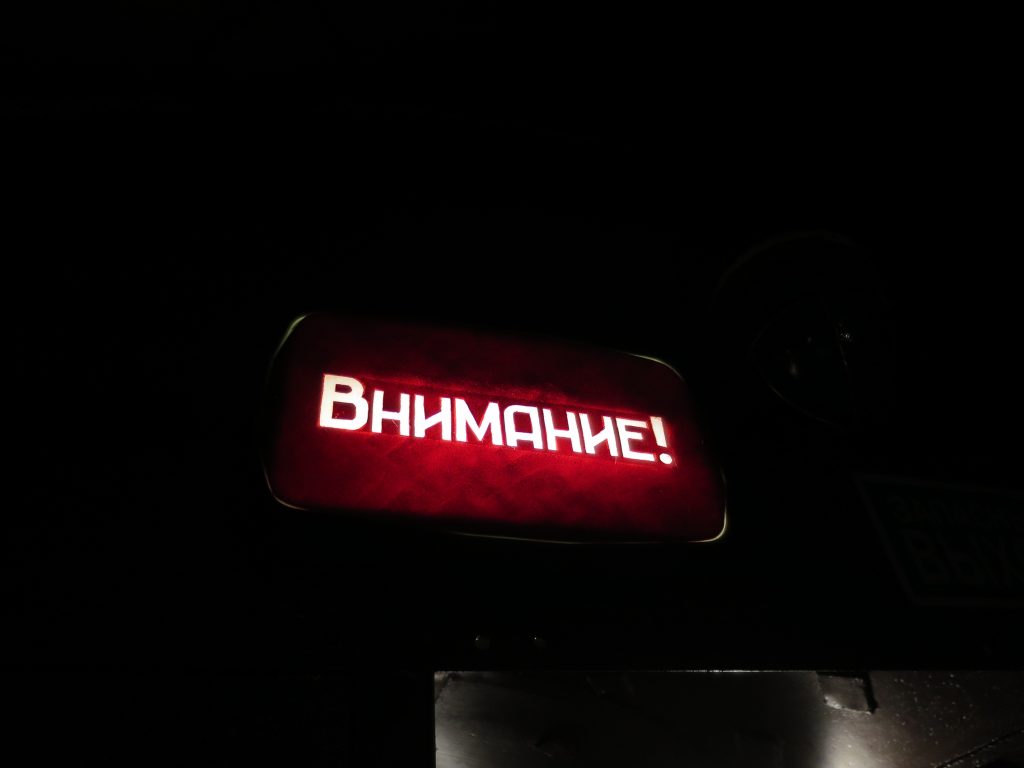 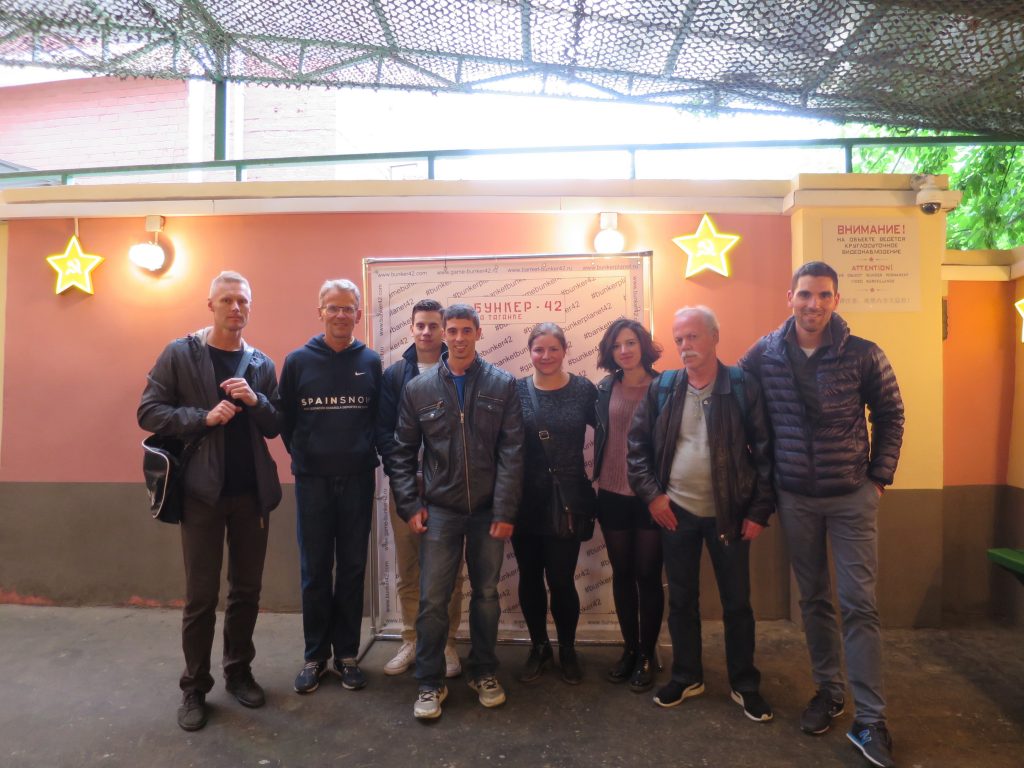 The group after climbing back out into the present day.

This blog was brought to you by Garbis, currently studying Russian at Liden and Denz