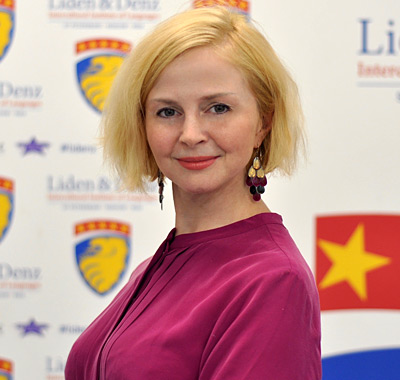 Since a few people have messaged me privately on Instagram, asking about the classes and teachers at Liden & Denz, I decided to take an interview with one of the staff members of our school. For those of you who are considering coming to St Petersburg and studying at Liden & Denz online, this article might be of interest. In general, the teachers here are all very qualified, patient and extremely nice. Today I would like to introduce you to Nadezhda (Надежда) – the headteacher or director of studies at Liden & Denz. (Little side note: her name means hope in Russian).

I asked her a few questions about her life, her career and St Petersburg.

1. Would you please tell us a little bit about yourself.

I was born in Russia, in St Petersburg and I graduated from Saint Petersburg state university with a degree in Russian as a foreign language. Currently, I am the headteacher or director of studies at Liden & Denz, but previously I was employed as a teacher here. So I have some teaching background.

2. Since you are a local here, what would you recommend a foreigner to do here? What is a must-see or must-do thing in St Petersburg?

Well, it depends on if you are here for the first or the second, third, fourth time. If you are here for the first time, I recommend you just follow the main touristic attractions — of course, the museums but also the architectural ensembles. As you probably know, the city did not develop naturally, hence chaotically, but it was built systematically, following a plan. Therefore we do not have single beautiful buildings, but we rather have whole complexes of buildings. That is why, in my opinion, the best way to admire St. Petersburg and to really see what they meant when they were building it, is to see the city as a complex. As far as the visiting time is concerned, the white nights is the most touristic time here — this period is not only special to tourists, but also to locals. Everyone is very active during these days and no one gets enough sleep. It is just a magical time in St Petersburg and probably the best time to fall in love with the city. I would definitely say that this is the best time to visit the city since you have more hours to enjoy it. But of course, you can enjoy other seasons too. One of my favourite periods is the end of September, beginning of October. During this time, we usually have a very clear and bright blue sky and very fresh air. The leaves start changing colours (so everything gets very colourful) and slowly, the trees start losing their leaves, which means, you can finally see our beautiful buildings through the trees. Another favourite month of mine here is March. We usually have snow in March, but it is the time of the year, when the sun finally lays its rays upon us and upon the city. The city gets very picturesque and it is a great month to enjoy the city.

3. Why did you decide to study Russian and English? Was there anyone that inspired you to do so?

I became very fascinated by the Russian language at a very young age already. I think I was 9 or 10 years old when I started to show great interest in etymology. When I finally started to learn English at school, I started noticing similarities between English and Russian. Also when I started to learn a second foreign language at school, which was, in my case, German, I loved comparing the three languages, which is why I chose to study Russian as a foreign language and combined it with comparative linguistics. Generally speaking, when you are interested in Etymology, you get to see all the similarities and differences between different languages.

As you might know, the Russian language has picked up so many words not only from different languages but also from different groups of languages. This is why it is so difficult to see, which word is actually of Russian origin. In general, there are only a few real Russian words, and to be honest, these are usually the most difficult ones. So if you come across a word that is very difficult to spell, to conjugate or to decline — it is probably a real Russian word.

4. Did you also study German?

No, I only had German in high school. I had two foreign languages in total, English and German. However, I do still have a lot of passive knowledge in German and I have a very wide vocabulary — I honestly, don’t know why. When I am in Germany, I only speak German. It’s bad, but I can communicate — this is the most important part to me. I also had Italian for 36 hours and I can speak it. When you are a linguist, it is easier for you to learn a language, you just understand how it works, you see the system and then you can choose the easiest way for you to learn the language.

5. What is the easiest or best way for you to learn a foreign language?

What I know for sure is that learning grammar from a sheet will definitely not help me improve my language skills. In my opinion, communication is the key. The easiest and best way to learn a language is simply by speaking. When I start to learn a language, I just start talking right away — at this point I do not care about grammar mistakes too much. In a lot of languages grammar is not very crucial for communication, like for example Italian — just use your hands when speaking. In German, however, you obviously need grammar. When it comes to Russian, you need grammar, but just to a certain level. In order to have a basic conversation, you actually do not need it that much and people will still understand you. If I were to study Russian, I would like to learn it at our school and not at university — I just do not like how they teach languages at universities. We would probably start with the language structure, cases, declension, conjugations and then move on to speaking — this would just not work for me. At Liden & Denz we mainly focus on speaking, and less on grammar — this is what I like about our teaching methods. Of course, we do have some courses that focus on grammar as well, especially when a lack of grammar becomes a problem. But, generally speaking, our school puts an emphasis on making students speak as much as they can.

6. Have you ever been to an English speaking country?

I have been multiple times to the United States of America, mostly to the north-east. I have quite a few friends there, who I like to visit from time to time and they are all living in this area of the US. Unfortunately I am very scared of flying, so I have not made it to California yet, because it would mean additional flighting hours.

7. Do you have any plans for the future and if you could travel to another country, where would it be?

Ireland! I have heard so much about it, especially the beautiful landscapes and just everything about it! I would like to visit England as well. I have been to London a couple of times and I have been to one more city outside of London. But I would absolutely love to go to the countryside of England. Just rent a car, drive on the wrong side of the road and explore all the cute little villages. When I learned English in high school, I read a lot of books of Agatha Christi — seeing the villages where Miss Marple might have lived and staying in cute, little, British flats — this is my long time dream. One day, I would love to take a road trip through the English countryside.

8. What is the most interesting part about your job?

The most exciting thing about my job is that each week I get the chance to meet new students from all over the world. We meet students who have studied Russian on their own, who studied Russian at university or who had private teachers and it is very interesting to see what kind of different ‚Russian‘ backgrounds they all have. Furthermore, I love seeing if our teaching methods can give students kick-start or help them improve their Russian. When someone, who just arrived in Russia, was confusing hello and goodbye, and then, let’s say within a few months could have simple conversations with us — this is a very rewarding feeling.

I had a very nice chat with Nadezhda, she was very welcoming, fun and kind. Her knowledge of the Russian language and Russian culture/history is very impressive. She also held a cursive writing class which I attended – needless to say that I learned so much about the Russian alphabet and the Russian history, while having a cup of tea and some delicious cookies. All in all, an amazing and inspiring woman!