A Stroll Around Pavlovsk Park

Saint Petersburg is adorned with many beautiful parks which are located close to the city. They are all easy to reach, but the one which always sticks out in my mind, however, is Павловск (Pavlovsk). Although this park is neither as grandiose nor as famous as Петергоф (Peterhof), it boasts the right to rival it in terms of its spectacular natural beauty. It is one of the smallest palaces and could also be combined with a visit to Царское Село (Tsarskoe Selo). 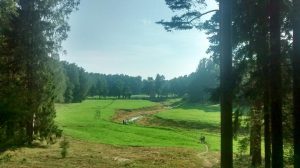 The history behind Pavlovsk

The park was designed by the architect Charles Cameron between 1781 and 1786. Екатерина Великая (Catherine the Great) ordered the park to be constructed for her son and future Царь (Tsar) of the Russian Empire Павел I (Paul I). As such, the name of the park derives from Paul’s name.

Many years later during World War II, the Germans set fire to the Palace after a cigarette was thrown on to the ground and a fire started. Much of the park including many of the trees were destroyed due to this fire and through the subsequent destruction of war. But since then, many trees have been replanted, and much restoration has been done to the Palace and the gardens transforming them into the wonderful, tranquil park that it is today. 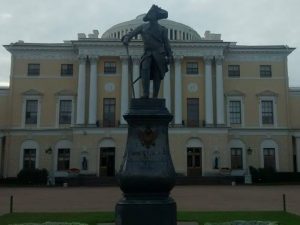 Inside the Palace, many of the rooms are very impressive. The rooms located upstairs are the finest and reflect the styles of many architects: Cameron, Brenna, and Rossi etc. It is easy to see Paul I’s personality come alive within the Palace, especially in the Hall of War, the Throne Room, and the Hall of the Maltese Knights of St John. It is interesting to note that Paul I was actually the 72nd Grand Master of the Sovereign Military Order of Malta from 1798 – 1801.

However, the Palace is also beautiful on the outside. It is very picturesque and sits on top of a small hill which is surrounded by a small, but pleasant river. 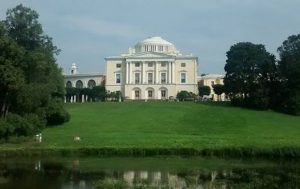 Going for a wander

Perhaps Pavlovsk is my favourite park that surrounds Saint Petersburg because of the fact that it is so green and expansive. The gardens are truly vast as they encompass around 1480 acres of land.  It really is a serene landscape which offers you the chance to simply relax and stroll around. There are many beautiful points at which you can stop, pause, and admire the setting and ambience around you. Exploring such places always gives me the sensation that I am almost walking through the pages of a great Russian novel like “Война и мир” Толстого (Tolstoy’s War and Peace). The park is covered in rivers, ponds, statues, and paths. There are even classical monuments and sanctuaries which are hidden away. All in all, the park is actually a pleasant place to be lost as you are bound to stumble across something that catches your eye and intrigues you. 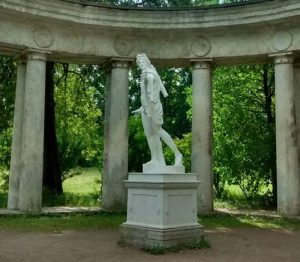 (The Apollo Colonnade in the park)

It is not at all difficult to get to Pavlovsk from Saint Petersburg. To get to Pavlovsk, first head to Витебский вокзал (Vitebsky railway station) which is located near Пушкинская (Pushkinskaya Metro station). Once at Vitebsky railway station buy a ticket which can be done either at the counter or on one of the machines. At the time of writing this article, a return ticket to Pavlovsk costs 108 rubles. After purchasing your ticket make your way to the train and the journey is around 40 minutes in total. But do make sure to hold on to your ticket as you will need to scan it for both parts of the journey! 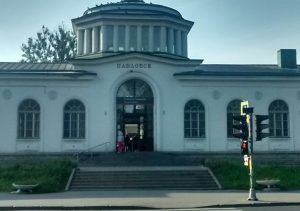 Make sure that Pavlovsk is on your list of places to visit whilst in Saint Petersburg. I am sure that you won’t be dissappointed!