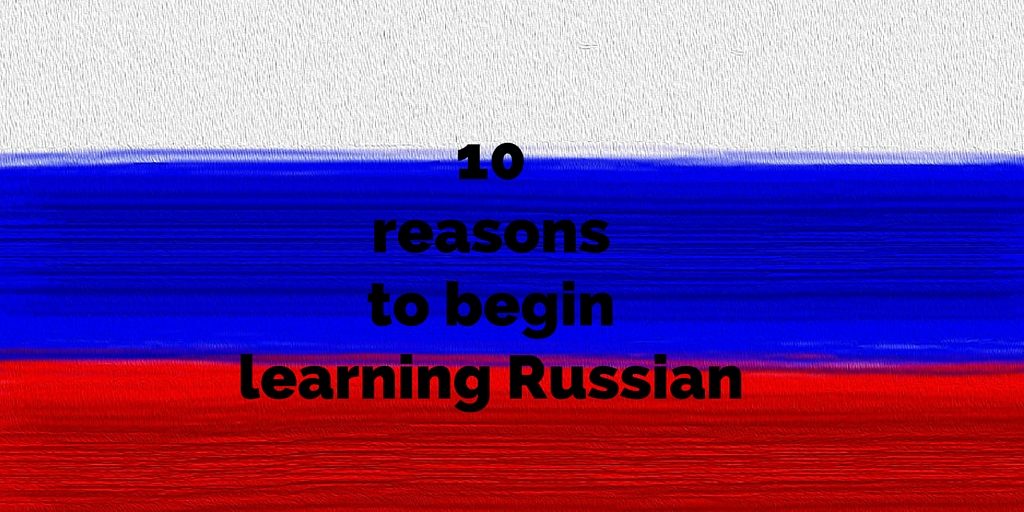 People often ask me why am I learning Russian. Since my arrival in Russia, every person I had a conversation with, which lasted more than five minutes, asked me exactly the same question: WHY DO YOU WANT TO STUDY RUSSIAN? WHY RUSSIAN? And, till now, it is pretty difficult explain to a mother-tongue Russian speaker the reason why you decided to learn his language. You look crazy in his eyes.

So I decided to resolve this problem by writing a list with the main reasons why one should be learning Russian.
Here’s what I think:

It’s not a crime. Maybe you can just love how it sounds. Or maybe your favourite hobby is learning new languages and the more exotic they are, the more you like it.

2. It’s the 6th most spoken language in the world.

More than 260 million people speak Russian. Indeed, It’s the official language not only of Russia (which is the largest country in the world) but also of Belarus, Kazakhstan and Kyrgyzstan. Furthermore, it is widespread also in Georgia, Armenia, Baltic States, Ukraine, Uzbekistan and even in Israel!

3. Russia is a regional power and is returning as a power in the world economy.

The growth rates of the Russian economy are higher than in Europe and they are still growing. Russia is the main European producer of grain and it has one of the biggest agricultural sectors of the world.

And even from the political point of view, Russia is one of the leaders in the geopolitical sector. For this reason, Russian is becoming one of the languages most used during the international diplomatic meetings.

4. Students of Russian have more possibilities to enter post-graduate programs and to go on to great careers.

It’s true. Students who study Russian have a high rate of acceptance for graduate study in law school, business school, medical school, and other professional programs.

Furthermore, they have many chances to take up a stable and profitable career in big firms.

If you love to travel around the world and your next destination is Russia, you have at least to learn some simple words and sentences. We can say that it is necessary to survive. Indeed, you can forget about speaking in English to buy a metro ticket or to order a burger. People who speak English are few and usually doesn’t work in restaurants and shops. Even in the metro stations all the indications are written in Russian and, more important, in the Cyrillic alphabet! Translations in English are rare and only available in a few stations.

In every corner of the world you’ll meet at least one Russian person. They love to travel and discover new places. Therefore, if your dream is to work in the touristic sector, it is better if you start learning a bit of Russian. Even because, as I said in point 5, they don’t like to speak in English and feel more comfortable to use their own language to communicate.

7. Learning Russian is a window to one of the world’s most fascinating cultures.

Russia is famous for its culture and traditions in the fine arts. For example, Russia has the best and most famous ballet companies and Russian theatres are well known all over the world. Some of the greatest literary masterpieces come from Russia and we also have to thank Russian culture for many visual art works.

8. If you are passionate about Russian classical literature.

Russia gave birth to many great writers, for example Chekhov, Pushkin, Tolstoy and Dostoevsky. If you are really interested in Russian literature, you should learn Russian in order to read the works in the original. Everybody knows that the original version, the one in the original language, is the best one. So, learning Russian is a must to fully enjoy and understand the reading.

Some simply don’t know it and others don’t want to speak it because they don’t feel comfortable. This is true for mid-aged and older people. But actually, the situation is changing. I’ve met many young Russian guys who can speak English and even at a quite good level!

A good and funny reason to begin learning Russian is to see the expression of people when you say them that you study this language. On their face appears a mixture of astonishment and appreciation that is really, really funny.

This blog was brought to you by Elena, currently studying Russian at Liden and Denz

One response to “10 Reasons to Start Learning Russian”