What it’s like studying Russian at a UK school 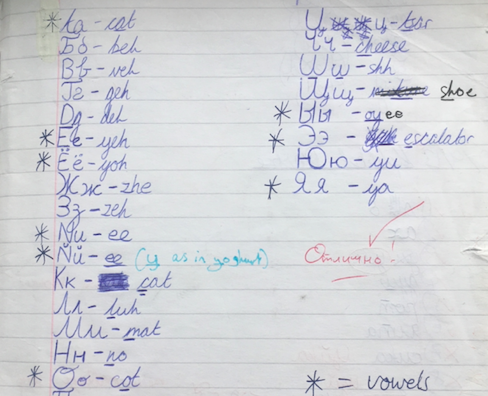 In the UK, it’s quite unusual for a school to offer Russian as an option for students – especially in a non-specialist secondary school. However, there are a few schools around the UK where students can pick up Russian from as young as age 13, even if they have no previous knowledge of the language. My school was one such school – I was offered the chance to learn Russian alongside my normal curriculum from when I was about 14 years old. This article will outline the experiences I had studying Russian at a UK school, what the exams were like, and what I learned along the way.

Our Russian department was ran by one single Russian teacher – however, the department definitely wasn’t blighted by its small size. Our teacher always made sure she was available outside of lessons if we needed homework help. She even organised a Russian lunchtime club, ran by some of the older students. This gave the younger students the chance to drop by if they wanted a quick bit of conversation practice!

We also had a visiting Russian teacher who came into school once or twice a week for dedicated conversation lessons. Although these speaking classes generally lasted only half an hour, it was a really good opportunity to have a chat with a native speaker. 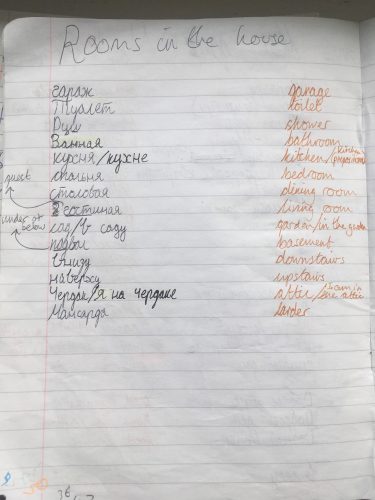 A vocabulary list from one of my first ever Russian lessons!

The British school system generally involves students taking two sets of ‘big’ exams. One set takes place at age 16 (“GCSEs”), and another set at age 18. The exams at age 18 are called A levels, and are the most important – they will help you get into university, if you’d like to go. My school taught Russian at both GCSE and A level, so we were able to get qualifications in Russian at both stages if we wished to.

Both GCSE and A level Russian involved three different exams. We had to sit one paper in listening, one in reading and writing, and one in speaking. All of these exams took place in school, with exam papers sent to a bigger, main exam centre for marking. In the UK, however, you don’t receive your results for GCSEs or A levels until about two months after you’ve done the exam. There was always an anxious period of waiting to see how you had done!

What did we learn?

The best thing about learning Russian at school was definitely the variety of content that we were able to learn. When we were younger, we’d learn simple vocabulary that might be useful. As all Russian learners know, one of the trickiest aspects of Russian is the grammar; this was slightly harder to grasp when we were younger, so we started off simple (I think the accusative case was the first one we learned!). Those of us who took Russian for A level were then introduced to some of the harder aspects of Russian, like verbs of motion and animate accusative. We also had the chance to write short essays on a variety of topics. You can see some example A level essay questions in the photo below! 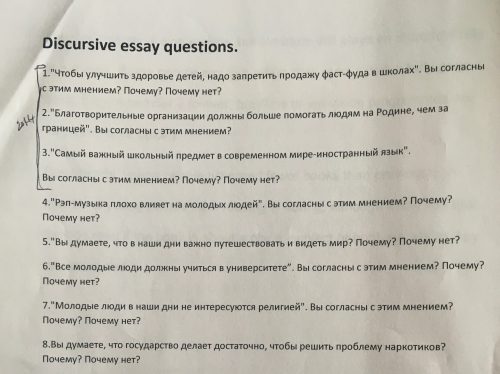 Overall, I had a great time studying Russian at a UK school. One of the highlights was definitely our Russian exchange to Moscow, which was available to all students of Russian in Year 12 (age 17). It was fantastic to get such a taste of Russian culture so early on in life. If I’d never had the chance to learn Russian at school, I’m sure I wouldn’t have chosen to study it at university, and wouldn’t be here at Liden & Denz today!