The Arctic and Antarctic Museum 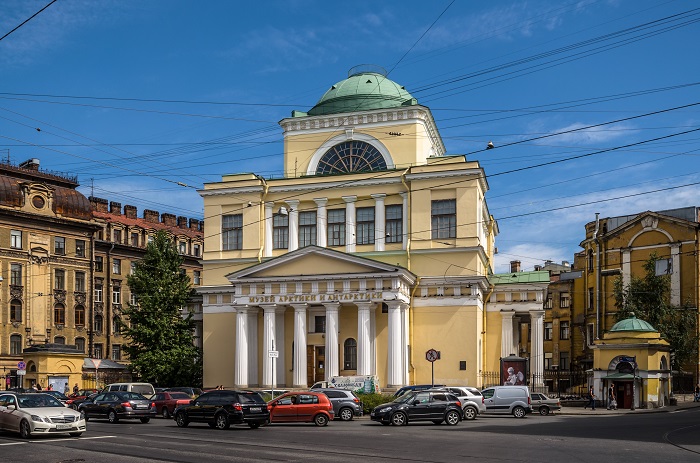 Every once in a while one stumbles upon these hidden gems that surprise you in a good way. Last weekend I visited the Dostoevsky Museum, which of course was interesting, and on my way back home I stumbled upon the Russian State Museum of the Arctic and Antarctic. Well, stumble is maybe the wrong word since the museum is housed in an old church that is pretty hard to miss.

I was a bit sceptical at first, thinking that it would be a rather dull and dry museum consisting of mainly taxidermy and long texts in Russian.

Upon entering the building the first thing I noticed was how cool it was. Cool as in cold, but also cool in the other sense. As I mentioned before, the museum is located in what was used to be known as the Saint Nicholas Old Believers Orthodox Church. During 1934-36 the church was refurnished to house the museum.

One thing I learned was that the golden age of polar expeditions is in a way still going on. The turn of the last century was of course the era when the biggest new discoveries where made but exploration and scientific study of the Polar Regions still continues in our days.

The museum embraces this fact and the exhibitions allows you to follow the history of Russian polar expeditions from the 1920s up until today. The history is also in the exhibited items themselves, early expeditions are presented with really cool dioramas (“The soviet expedition saving the Italians in distress” is my favourite) as well as the conventional taxidermy. Throughout the building you’ll find portraits of Soviet Polar heroes as well as murals of different soviet expeditions. These murals were probably painted over the more religious themed pictures that were there during the days of the Saint Nicolaus Church.

Upstairs you’ll find a more recent exhibition about the Polar Regions during the Second World War and an exhibition of art and handicraft from the Russian polar republics.

If you have the slightest interest in the Polar Regions and/or the history of Science I can warmly recommend you to make a visit to this museum. Don’t forget to have a look at the building as well, the change from church to museum makes for some interesting architecture.