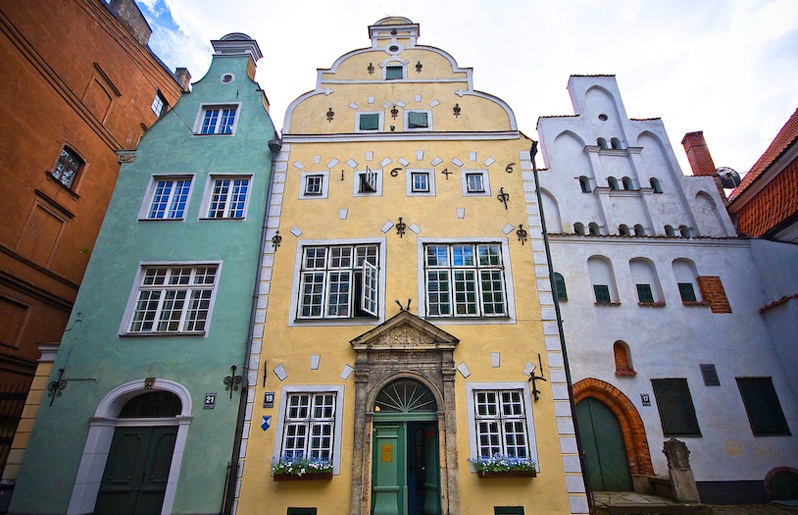 From the title, your first thought might go to “The Tales of Beetle the Bard: The Deathly Hallows” from Harry Potter. I know mine did(: The title “The Three Brothers” though actually refers to some of the most iconic buildings in Old Town Riga, a set of three dwelling homes located at addresses 17, 19 and 21 Maza Pils St. near the Catholic Cathedral “Jekaba Katedrale” or St. James’s Cathedral. All three dwellings are connected inside, and while different, also share subtle similarities that resemble a set of siblings. While their faces and outward appearances may be alike, the inherent emotions, characters and subtle features of each sibling make them profoundly unique.

Like the typical oldest sibling, No. 17 (the building situated on the right, and built in the 15th century) is prominent and distinguished, with authority and seriousness in his demeanor. In many ways, he sets an example in appearance for his two younger siblings. Characterized by crow-stepped gables on top, small and simple Gothic decorations on the door frame and columns above, and a few scattered Renaissance ornamentations, he is recognizable even from afar. Originally the building consisted of one large room and an attic above, but now has two floors with a wooden interior. Inside is housed the Latvian Musem of Architecture. It was restored in 1957.

The much more elaborate and gaudy No. 19 fits the middle child stereotype perfectly. Desperate to prove himself and eager to gain parental approval, he is much more beautifully decorated than his elder in a semi-Dutch mannerism style from the 17th century. This is seen through the effortless and simple decoration on the outside. With inset white bricks against the yellow exterior, a curving, delicate roof and almost countryhome-like windows inset throughout, it is the most intricate of the three homes. The stone portal was added in 1746.

The third brother, or the green house at No. 21 is obviously the baby of the family. Both younger, shorter and smaller in volume than his counterparts, this 18th century home features an impressive baroque curved-pediment roof outline, designed more for grandeur than efficiency. A wooden staircase in the first room leads to a set of offices that spread throughout the three buildings. While not as impressive as the other two, he holds his own place in the view.

For anybody looking for great architecture, the Three Brothers is a must-see. More than that, maybe looking at it will help you understand your siblings better(:

Всем Привет! My name is Mark Kennedy, and I’m currently studying Russian at the Liden and Denz Language Center in Riga, Latvia! To say I’m excited to be here is a severe understatement. Currently I'm going into my fourth year at the University of Michigan-Ann Arbor, where I'm enrolled as a dual-degree candidate, earning two degrees in Russian Language and Literature, and French Horn Performance. I started my study of Russian during a two-year mission for my church in St. Petersburg, Russia. Probably one of the coolest things I’ve ever done! My language learning started off as kind of a trial by fire: with only 12 weeks of training beforehand, I was thrown into Russia and expected (to attempt, at least) to hold full on conversations with people. In the beginning it wasn’t pretty, but the sink or swim mentality of it all forced me to work hard from the start, and motivated me to really overcome any issues I had quickly. Combined with a personally guided plan of language study and some study materials, I came to love the language and the Russian people a TON! Two years later and I’m still studying it… Outside of Russian language, my French Horn degree keeps me busy. Favorite composer is probably Richard Strauss, and my favorite symphonic work is The Rite of Spring Suite by Stravinsky. (Debussy Piano pieces are my favorite non-symphonic works). I’m also into basically anything arts related: singing, dancing, listening to Maroon 5, drawing Sharpie art, going to art exhibits, going to orchestra concerts, etc. In terms of sports, I was a collegiate rower for the University of Michigan in 2011-2012, when we won the National Champions Team Trophy, and I play Ultimate Frisbee. I’m excited for this opportunity to write for Liden & Denz, and to share my enthusiasm and excitement about Riga and the Russian language!