Towns outside of Saint Petersburg 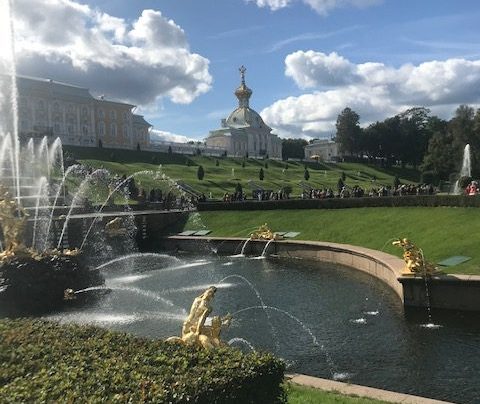 No one can claim that the city of Saint Petersburg lacks activities or entertainment. However, while being here for several months, I have particularly enjoyed visiting towns on the outskirts of the city. I find that on the weekends, the pretty, historical small towns which border Saint Petersburg prove a nice break from the hectic buzz of busy city life. Here are a few of my favourite places outside of the city which I have visited during my trip.

One of the most popular tourist attractions in the Saint Petersburg region is Peterhof. This is a series of palaces and gardens located on the southern shore of the Gulf of Finland. I was impressed by the beauty of the fountains and geometrical design of the impeccably manicured gardens. Peterhof parks are open the whole year, but the fountains only work from late April until mid-September (and only from 11:00 until 18:00/19:00 on weekends). The palaces are also a key attraction, but visiting during high season, I was satisfied just seeing the fountains and beautiful parks. Ticket prices vary depending on which parts you wish to access, and also depending on when you visit (high season during summer or low season in winter).

Another trip I enjoyed was my visit to Pushkin (formerly Tsarskoye Selo). This is a town located 24 kilometres south from the centre of Saint Petersburg. The main attraction which I visited here was Catherine Park and Palace, named in honour of the Empress Catherine I. The park consists of 107 hectares of gardens and restored pavilions. The stunning architecture combined with the fresh beauty of the surrounding nature makes this area a very pleasant place for a walk during nice weather. Catherine Palace is also particularly renowned for its intricate interior decor and layout. In my opinion, the easiest way to get here is to take an electric train from Vitebskiy Railway Station (near Technologicheski institut metro station). Trains leave every hour, and the ride lasts 30 minutes, followed by a 30-minute walk to reach the palace. Alternatively, a Yandex from a similar area takes about 50 minutes, and costs just 700 rubles.

More recently, a couple of weeks ago I visited Vyborg, a town located 38km South of Russia’s border with Finland. Vyborg was Finland’s second city before World War II, but is now a Russian town. One of its main attractions is Vyborg castle, a Swedish-built medieval fortress, which once defended Vyborg against the Russians. As well as visiting the city’s large park, we enjoyed lunch in a traditional Swedish restaurant. I would also recommend anyone to try a Krendel, from Vyborg’s famous Krendel cafe. It is a sweet, biscuit-like treat, shaped like a pretzel, which tastes similar to gingerbread. To get there and back, we took an electrichka train from Finlandsky station. This took slightly over an hour, and cost 360 rubles each way. 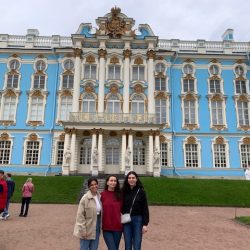 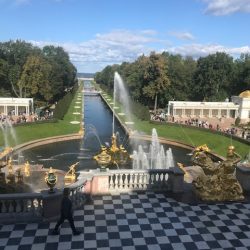 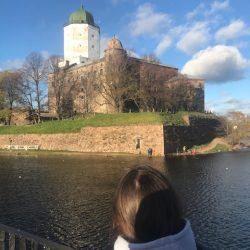 So, if you fancy a break from Saint Petersburg, why not take trip to one of these pretty towns. All three places are close enough for a day-trip, but far enough to experience a new ambience to the busy centre of Russia’s second largest city.

By Alice, currently studying at Liden & Denz in Saint Petersburg