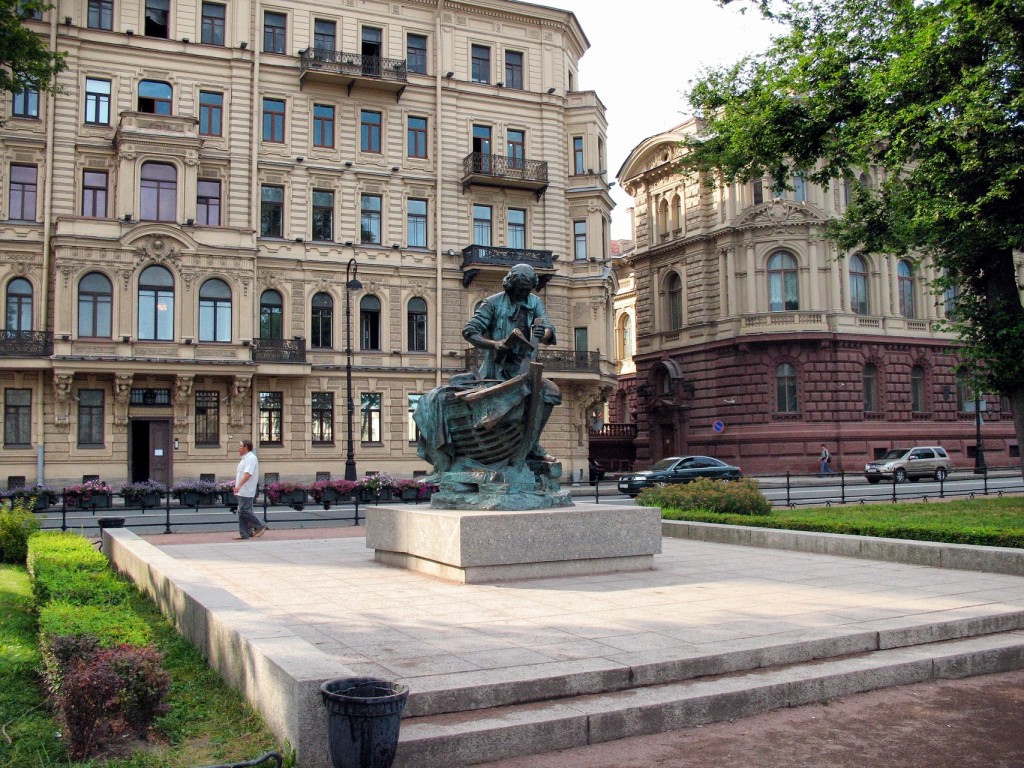 On your journey though Saint Petersburg, walking along Адмиралтейская набережная (Admiralteyskaya Naberezhnaya) you can come across a quite unusual monument Царь-плотник (The Tsar Carpenter). What’s unusual? The statue represents the great Russian Tsar Пётр I (Pyotr I) dressed like a common humble man while he is working on a ship’s fore. He has an axe on one hand and with the other he holds firmly a stick of wood. This monument, that show the Russian monarch in such an unexpected way, was established to celebrate his high contribution to the shipbuilding industry in Russia.

At the time Пётр I ruled over all Russia, the country was stuck in a social and economical immobility on the grip of the Orthodox Church and the boyar aristocracy. But Пётр I had different plans. He decided to remove part of the old institution and take them under his control. He wanted his great country to be modern, to stand with the major world powers of that time and therefore he looked to the West, to Europe. These ambitions brought Пётр I to change the inner nature of Russia in order to create an army and a navy so strong and powerful to compete with Europe and to finally take possession of the Black, Caspian and Baltic seas. Unfortunately shipbuilding industry and naval engineering were still at a beginning stage in Russia.

Since his childhood, the young prince got in contact with many tradespeople and craftsman from Germany and Holland and they thaught him their techniques, especially how to turn wood. He was attracted to ships since he first saw the remainders of a sailing ship while he was walking in the countryside. He was used to the clumsy barges piled up on Russian rivers and then he was impressed by such a fine art work, so he decided he was going to learn to sail.

At the end of the XVII century, during the long war against the Turks to gain control the Black sea, he decided to take some time to travel and achieve more techniques about shipbuilding. He left Russia to Saardam, in Holland, which owned one of the main shipyards. There he met with his Dutch friend Gerrit Kist and signed, as Пётр Михайлов (Pyotr Mikhaylov), on a carpenter’s apprentice at the Lynst Rogge shipyard. His secret identity didn’t last for long and soon a lot of people came to see the Russian Tsar at work.

Eventually Пётр Великий (Peter the Great) achieved his aims; he turned the boyar aristocracy into a European one and built up a new city with an access to the sea, a port and a powerful navy: Saint Petersburg. In 1712 it replaced Moscow as the Russian capital. He completely transformed his country to realize his dream. And now you can find him leaning against the ship on which he is working, on the Адмиралтейская набережная in this unique city that he strongly longed to create.