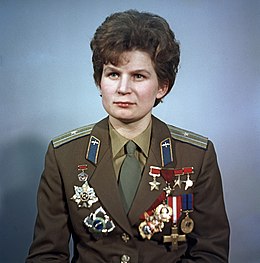 Valentina Vladimirovna Tereshkova (Валенти́на Влади́мировна Терешко́ва ), born 6th March  1937, is a retired Soviet cosmonaut and engineer and is famous for being the first woman, and first civilian, to have flown in space!

She was never a part of the army or anything like that, but was an amateur skydiver before being selected from more than 400 applicants to pilot Vostok 6 on the 16th June 1963.

In 1969 she became a prominent member of the Communist Party of the Soviet Union and remained politically active once the Soviet Union collapsed, and is widely considered a heroine in post-Soviet Russia.

She’s not been idle since as she volunteered in 2013 to go on a one-way trip to Mars if the opportunity ever arose and at the opening ceremony of the Sochi Winter Olympics she was one of the Olympic flag carriers!

After 120 parachute jumps, pilot training in fighter jets and intensive exams, Tereshkova was chosen to pilot the rocket alongside Valery Bykovsky, spending three days in space and orbited the earth 48 times!

Her call sign during the mission was Ча́йка, Russian for seagull, and an asteroid was named after her using this call sign: 1671 Chaika.

She has received many awards and accolades for her achievement and was even named “Greatest Woman of the 20th Century”!

Jade Mitchell-Ross is an English student, currently on an internship while studying Russian at Liden & Denz