Victory Day in Russia is coming up at the end of this week, and as usual, there is plenty planned. The annual parade will take place this year, having been postponed last year due to the pandemic, as well as the Immortal Regiment. Of course, May 9th only happens once a year; however, there are many permanent Victory monuments across Russia, as well as memorials. Read on to have a look at some of the most poignant Russian memorials and monuments. 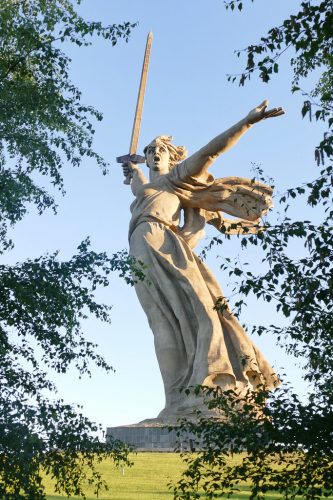 The Motherland Calls (Russian: Родина-мать зовёт!) can be found in Volgograd, a city in the south of Russia. Volgograd was formally known as Stalingrad, and this is why the monument was placed there. It commemorates specifically the Battle of Stalingrad, which took place in the Second World War. Interesting features of this monument include the raised sword that the figure holds, and the two hundred steps leading up to the statue, each step symbolising one day of the Battle. The memorial is also very special due to the fact that it was declared the tallest in the world in 1967. Whilst this is no longer the case, it is still allegedly the tallest in Europe, as well as the tallest of a woman.

Along with the ‘Rear-front’ memorial in Magnitogorsk and the Soviet War Memorial in Berlin, this monument makes up a triptych – an artwork in three parts.

The Monument to Mothers, Zadonsk

The Monument to Mothers (Russian: Памятник матери) can be found in Zadonsk, a small town on the Don River. Built in 2005, it is a monument dedicated to all those who did not return home from the war. However, it is also dedicated to one specific person. A mother from Zadonsk, Maria Frolova, sent eight sons to the Great Patriotic War, but none of them came back. For this reason, she is considered to symbolise all mothers who had to say goodbye to their sons as a sacrifice to the war. Behind the main monument of the mother, you can see eight pillars – each one symbolising one of her children. 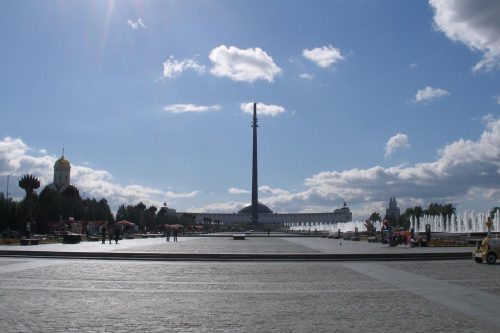 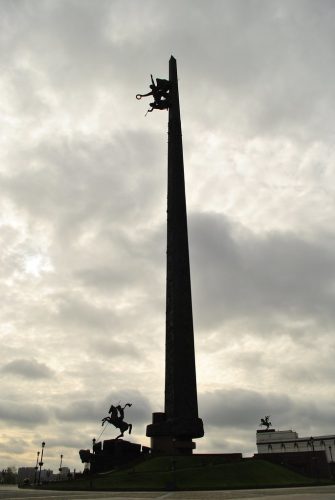 Arguably one of the most well-known monuments, the Victory Monument (Russian: Памятник Победа) in Moscow is certainly a sight to behold. Located in Victory Park, it is known to be the tallest monument in Russia. One of the monument’s main features is the Goddess of Victory, Nike, who stretches out from just below the very top of the monument, flanked by two angels. The monument as a whole was built to resemble a bayonet. It was completed in 1995, and stands before the Museum of the Great Patriotic War, or Victory Museum. Due to its vast height, it is very easy to spot in the park!

Monument to the Heroic Defenders of Leningrad, St Petersburg 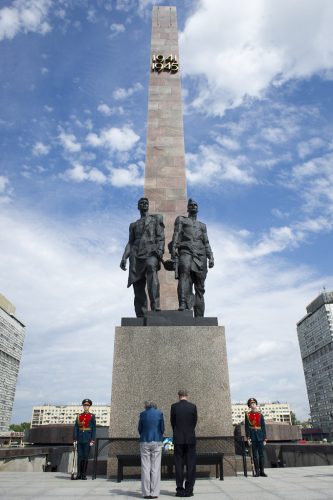 Found in St Petersburg, the Monument to the Heroic Defenders of Leningrad (Russian: Монумент героическим защитникам Ленинграда) is a grand structure with many different parts, each one symbolising something different. The monument is large, oval-shaped, and almost like a park. In the middle of it is a Memorial Hall, a concrete ring-shaped structure which commemorates the blockade of the city. Within the Monument there is also an Eternal Flame, with the phrase 900 дней, or 900 days, carved beside it. What perhaps stands out the most, however, is the obelisk of the monument – the tall structure which forms the main focus of the Monument. The years 1941-1945 are carved on its side, marking the beginning and end of the war. Construction on this monument finished in the 1970s, so it is amongst one of the oldest monuments featured in this article.

The Rzhev Memorial to the Soviet Soldier (Russian: Ржевский мемориал Советскому солдату) is the most recently constructed memorial featured in this article. It is located in the Tver Oblast, not far from the town of Rzhev, and is dedicated to those who died in battles near Rzhev during the Great Patriotic War. The monument consists of a bronze statue of a solider, sculpted artistically to look as if the statue is floating. Work on the structure began in 2019 and was completed in 2020. Although it was ready in time to be officially opened on Victory Day last year, the ceremony was delayed due to the pandemic. The ceremony eventually took place in June 2020, and this outstanding monument is now open for visitors.

Although only five monuments are mentioned here, there are of course thousands more memorials and Victory monuments across Russia. Often, monuments are found in the smallest and humblest of places – they are not always vast and impressive. The monument in Zadonsk is a perfect example of this. It is situated in a quiet town, and is not particularly grand, yet its story is perhaps one of the most poignant of them all. There’s plenty to keep busy with this Victory Day – however, if looking for a moment of quiet reflection, there is nowhere quite like a dedicated memorial or monument, built to remind us of the past.

Want to find out more about the history of the Great Patriotic War? Check out our article from last year featuring different stories from the war.