An afternoon with a Russian accordionist

Last Friday, Anton Semyonov, a Russian accordion player visited Liden and Denz and gave a private performance for the students and staff here. So, instead of writing blogs, I spent the afternoon listening to his music, and enjoying the lively atmosphere it created across the building, as well as learning lots about Russian music.

A bit about the songs

The first song he played was ‘Катюша’, which is a Soviet folk-based song and military march. It was composed by Matvey Blanter in 1938, with the lyrics written by Mikhail Isakovsky. The song describes a woman named Katyushka, who is singing for her lover, a soldier serving Russia far away from her. As he protects his country, she promises to protect their love. This song became particularly relevant during the Second World War, when many Soviet men had to leave their women to serve – some of whom sadly never returned. Anton played this song to us, then got us to sing along, and eventually we sang it ourselves while he played the accordion.

The next song we sang was ‘Старый Клен’, which translates as ‘Old Maple’. This was composed by Alexandra Pakhmutova to Mikhail Matuskovy’s lyrics, for Chulyukin’s 1962 film ‘Девчата’ (The Girls), apparently inspired by the poems which Matuskovsky brought Pakhmutova. After the film’s release, the song became very popular, and is now considered a Russian folk song, sang on camping trips, on trains and during feasts. 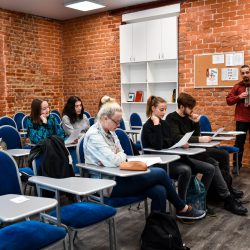 Learning the lyrics while Anton sings

We then got up to dance to Anton’s music, and he introduced us to some Soviet dancing games, including one called ‘утка и селезнь’ (which translates as male and female duck). As the name suggests, the male dancer acts as a male duck, and the woman is a female duck. The aim is for the man to catch the woman, who is trying to get away from him. To make it more interesting, the other participants form a circle around the girl to stop the man from reaching her. When (or if) he eventually succeeds, the man gets to kiss the female ‘duck’. Although it may sound a bit complicated, once you get the hang of it this game is especially fun to play to Russian accordion music, and should leave you out of breath!

While listening to the music, we were provided with typical Russian food, which included bublik, sushki and pryanik, shown below. Bublik (бублики), are large, ring shaped bread rolls made from yeast-leavened wheat dough boiled then baked. Sushki (сущки), are smaller bread rings, which are crunchy and sweet, while pryanik (пряники), are sweet, chocolate baked shapes made from flour and honey. Together with warm cups of tea (чай), these snacks were the perfect accompaniment to the afternoon of Russian music. 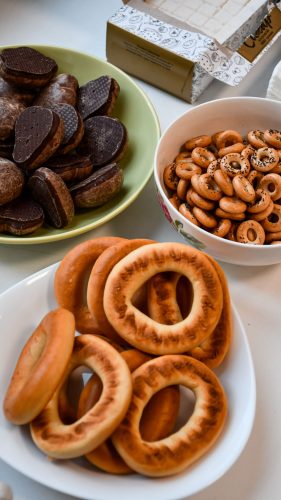 You can see more pictures and videos from the event on our Instagram – @lidenz!