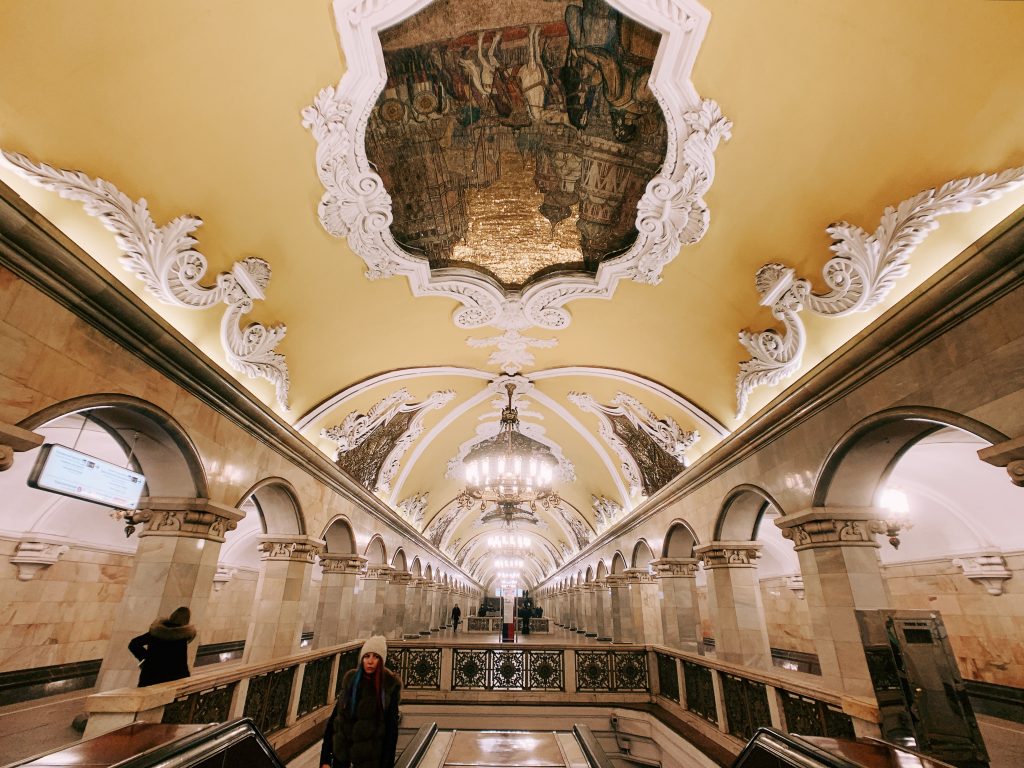 As you may know, the Moscow metro is considered one of the most beautiful all over the world, and everyone coming to Moscow should spend some time, not just passing by, to explore the vast array of ornate metro stations!

If you put some keywords on Google, you will easily find a lot of websites showing you a beauty of Moscow metro station, and which is a best and must. However, unfortunately few of them tells you how to organise an exciting and effective journey! Though metro itself is efficient and frequent in Moscow, without a well-organised plan, your trip would be time-consuming nightmare!

It is not a problem if you live in Moscow permanently, but if now, you’d better decide where to go, what to see, and in what order you achieve this! Hence, this article shows some wonderful metro stations in Moscow, and how to visit them without wasting time.

First of all, you can start your journey at Славянский бульвар (Slavyansky Bulvar). It is on Line 3 and it takes around 20-25 mins from the centre! As inspired by French architect Hector Guimard and newly build in 2008, you can feel a mixture of Moscow metro station and modern architectures. 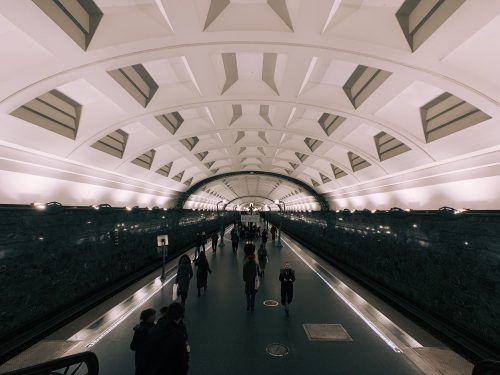 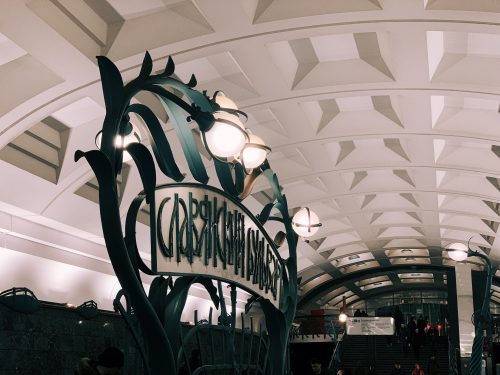 You take Line 3 again, and the next station is called Парк Победы (Park Pobedy). Two classical long halls represent two victories in Russian history: the 1812 War against Napoleon and World War II. Apart from its fashionable interior, it is the deepest metro station in Moscow at 84 meters underground! 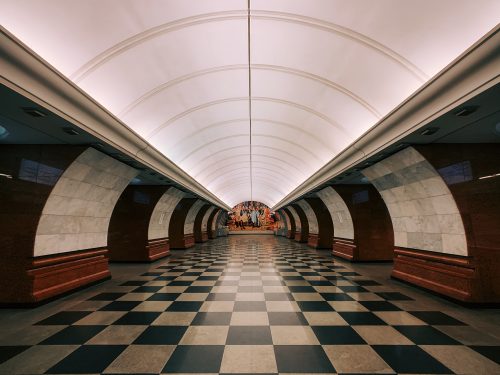 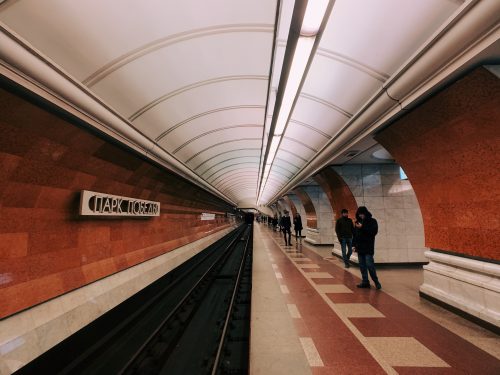 The next destination is one of everyone’s favourite, Киевская (Kievskaya)! Its interior is gorgeously decorated with marble and granite, and columns placed on the walls tell you some stories about Russian and Ukraine! There are three stations with the same name (Line 3, 4 and 5), but we highly recommend you to visit all of them as each station gives you a different taste. 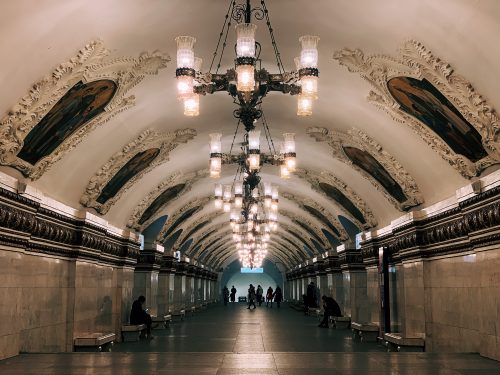 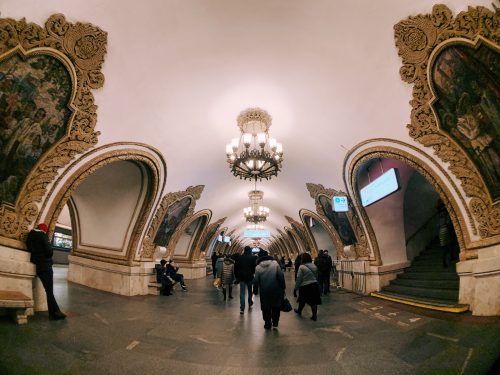 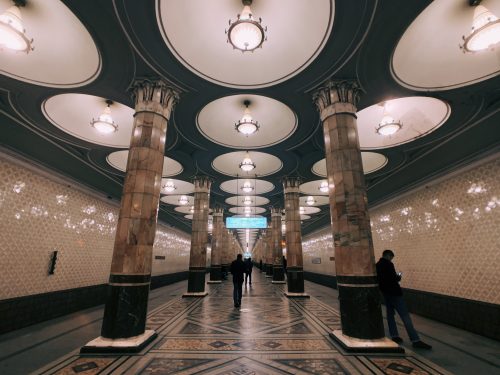 After circling Kievskaya’s three stations, come back and take Line 3 again, then leave for the next station, Арбатская (Arbatskaya)! Once entering the station, you will be amassed by its beautiful bronze chandeliers and distinctive interior patters! There are two Arbatskaya stations in the Moscow metro (Line 3 and Line 4), but there are not transferable, and the one on Line 3 is far more attractive. 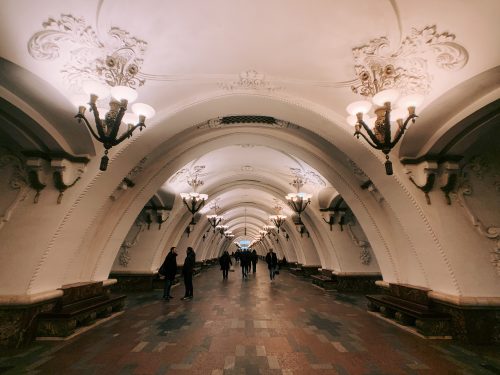 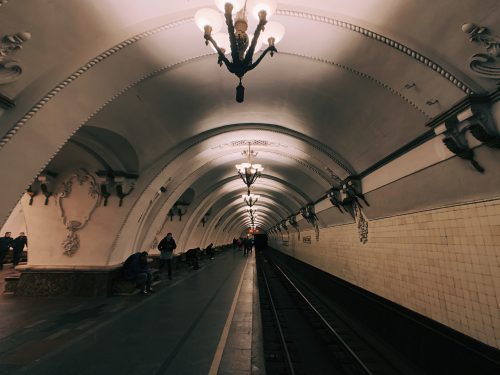 The next station is Площадь Революций (Ploschad’ Revolyutsii) on Line 3, where you can see 76 bronze statues which represent the participants of the Bolshevik Revolution in 1917! As this is at the centre of Moscow, you can also get out of metro stations and have lunch at Red Square as well. 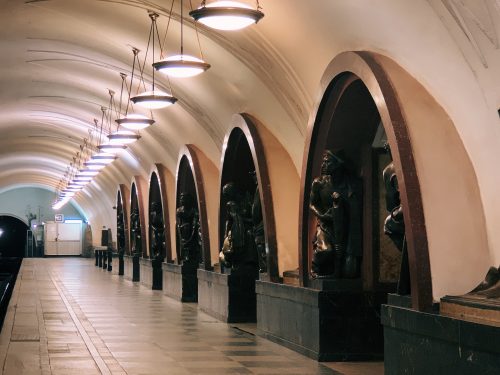 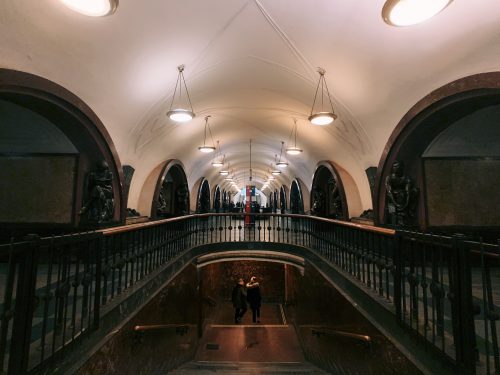 Change trains at Ploschad Revolyutsii from Line 3 to Line 2, and head to North, and find Маяковская (Mayakovskaya). Despite its old history, built in 1938, you can feel a modern taste with slender pillars and spacious ceilings. You may not notice it if you are just using this for commuting, but there are numerous beautiful mosaics inspired by Alexander Deineka on the ceilings! 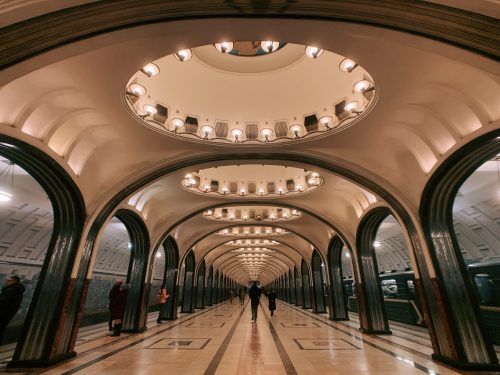 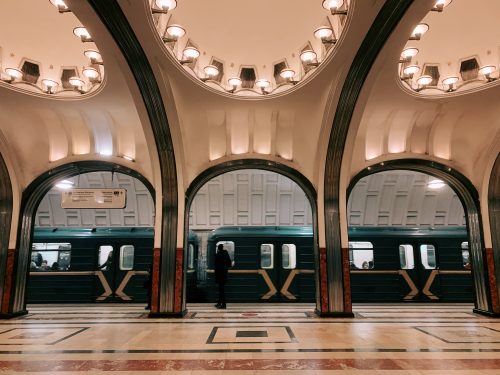 Get to the same line and the next station is called Белоруская (Belorusskaya), which you use to come to our school, Liden & Denz in Moscow! Apart from its elegant design, you will see the enormous statue of three men depicting Belorussian guerrillas! 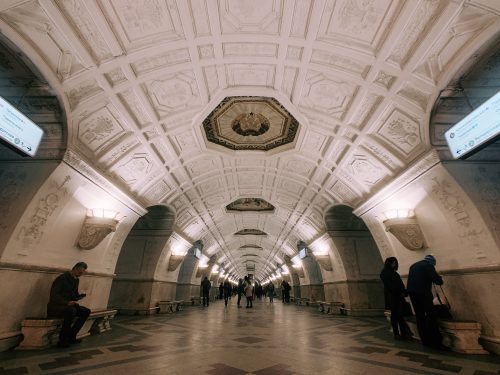 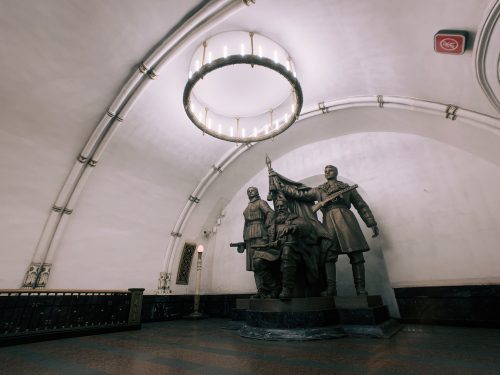 You change lines at Belorusskaya from Line 2 to 5, and then you can just use Line 5 for the rest of this trip. If you like stained glass, Новослободская (Novoslobodskaya) is definitely for you! On the arched walls are the most colourful stained-glass decorations. 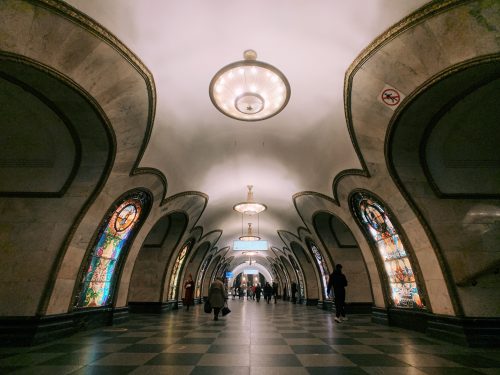 The next station is called Проспект Мира (Prospekt Mira), you can enjoy gorgeous chandeliers and lovely paintings representing agriculture and harvesting. Pillars are decorated with white marble and reliefs of various leave! 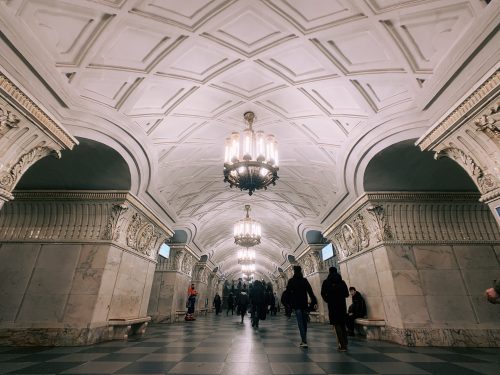 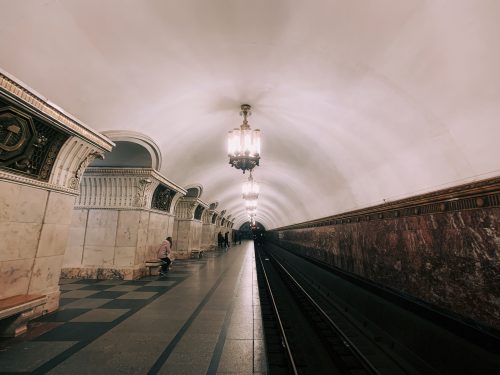 There is no doubt that many visitors are fascinated by the incredible yellow ceilings of Комсомольская (Komsomolskaya). Located under the three busiest Moscow railway terminals, this  station honours the memory of Nevsky, Donskoy and other great leaders of this country! 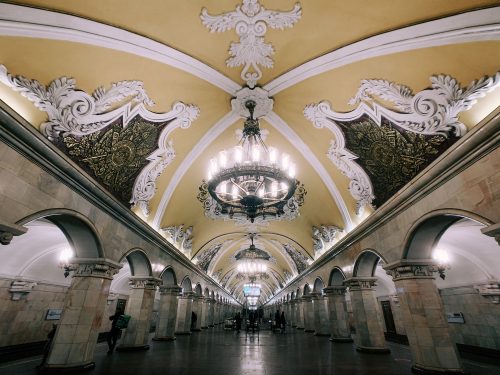 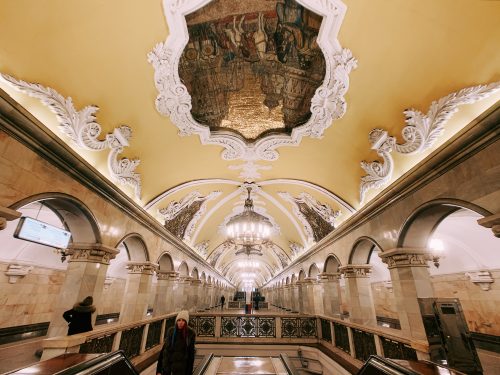 After Komsomolskaya, you will arrive at Таганская (Taganskaya), where sky-blue reliefs calm your feelings. The main theme of this station is medieval architecture, and you will discover the profiles of the Soviet Army on the walls! 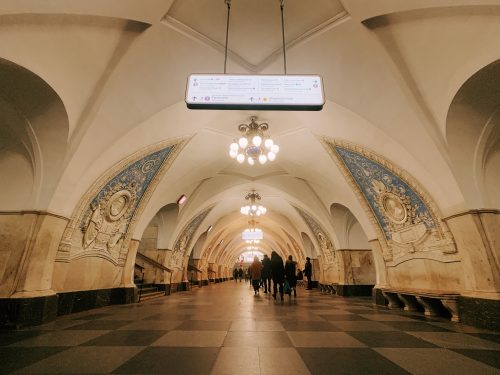 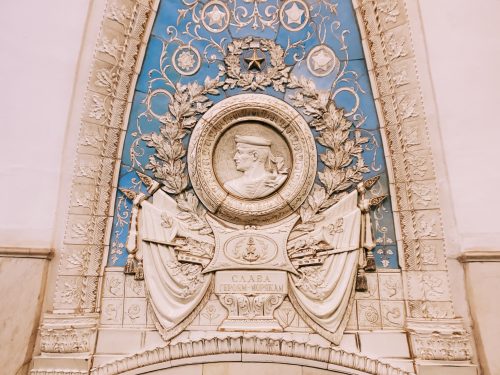 Last, not the least, Парк Культуры (Park kultury) is located just next to one of the biggest park in Moscow, Gorky Park, and its stylish interior is made of five kinds of marbles from light grey. People curved on the reliefs represent the labor and activities of the Soviet Era! 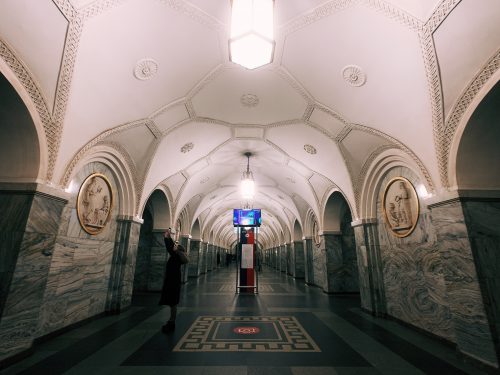 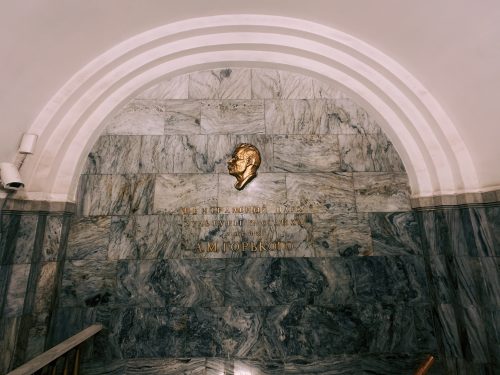 Yusei Ando is a passionate intern from Japan, currently working and learning Russian with Liden & Denz in Moscow!