Bulgakov – Three things to do in Moscow. 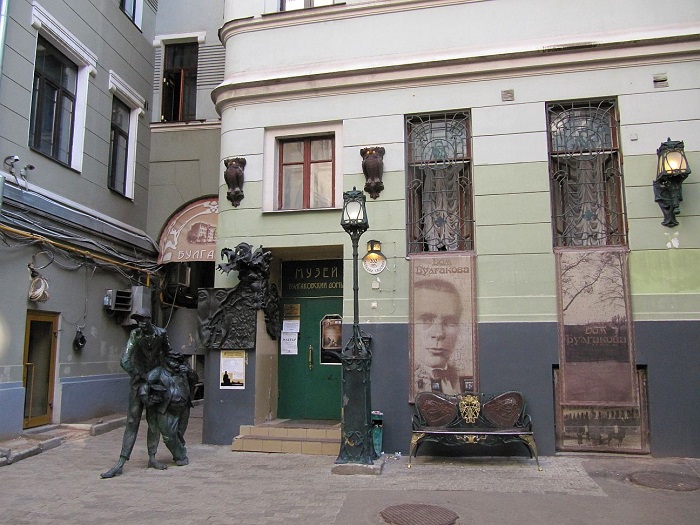 Michail Bulgakov’s Master and Margarita written during the period 1928-40 is probably one of the most popular Russian novels, both in Russia as well as abroad. The novel, written from memory after Bulgakov burned the first draft, famously starts with a mysterious stranger arriving at the Patriarch ponds in Moscow, accompanied by an equally mysterious cat, Behemot. This encounter marks the beginning of an equally fascinating and intriguing story that explores themes ranging from religion, morals and atheism to early Soviet bureaucracy and biting satire.

As already mentioned, the novel has become a favourite both in Russia and abroad since its first release in 1967. Today it is considered a part of the Russian literary canon accompanying earlier literary giants such as Dostoevsky, Tolstoy and Pushkin. The popularity can be illustrated by the fact that Bulgakov, and Bulgakov-related themes have been covered three times earlier in this blog. My college Ana made a great post about must-reads from the Russian literature. Read it here!

Earlier, there’s also been posts that somewhat cover what I am about to cover here. Though I’m sure I will add a personal touch! Let’s take a walk in Bulgakov’s Moscow:

Start of by taking the metro to Mayakovskaya (Маяковская). There’s an exit named Bulgakov Museum, exit there and take a left. You will end up in the middle of the hustle and bustle of the Garden Ring (Садо́вое кольцо́/Sadovoye Koltso), and the Bolshaya Sadovaya (Большая Садовая). Make your way to number 10. On the way there, don’t miss the statue of Mayakovsky himself. Apparently he and Bulgakov used to play billiards together, Mayakovsky usually winning.

In this building you will find two museums, both dedicated to Bulgakov. There seems to be some rivalry between the museums, in the words of one of our former interns: “you should probably visit both!”.

The first museum is located on the ground floor and presents exhibitions about Bulgakov, his writing and life as well as exhibitions concerning other authors and artist related to Bulgakov. The museum also arranges excursions in Moscow and has a library with everything related to Bulgakov and more. There’s also a rumour that Behemoth lives in the museum, or at least his namesake…

On the fourth floor you’ll find the other museum, located in the writer’s apartment. The museum exhibits Bulgakov’s life in the kommunalka, allowing the visitor to wander from room to room and look at artefacts and memorabilia from his life. There’s also a room dedicated to temporary expositions, as well as excursions and other cultural events.

After two museum-visits and walking the busy Garden Ring, make sure to have enough time to go down south and make your way to Ermolaevskij Pereulok (Ермолаевский Переулок) which leads to Patriarch Ponds. The ponds used to be much bigger in Bulgakov’s time, but it is still a great place to relax and get some time in the shade. For the full experience: make sure to be seated with your back to the Malaya Bronnaya Ulitsa (Малая Бронная Улица), just as in the novel. But please, obey the sign: