If Buildings Could Talk 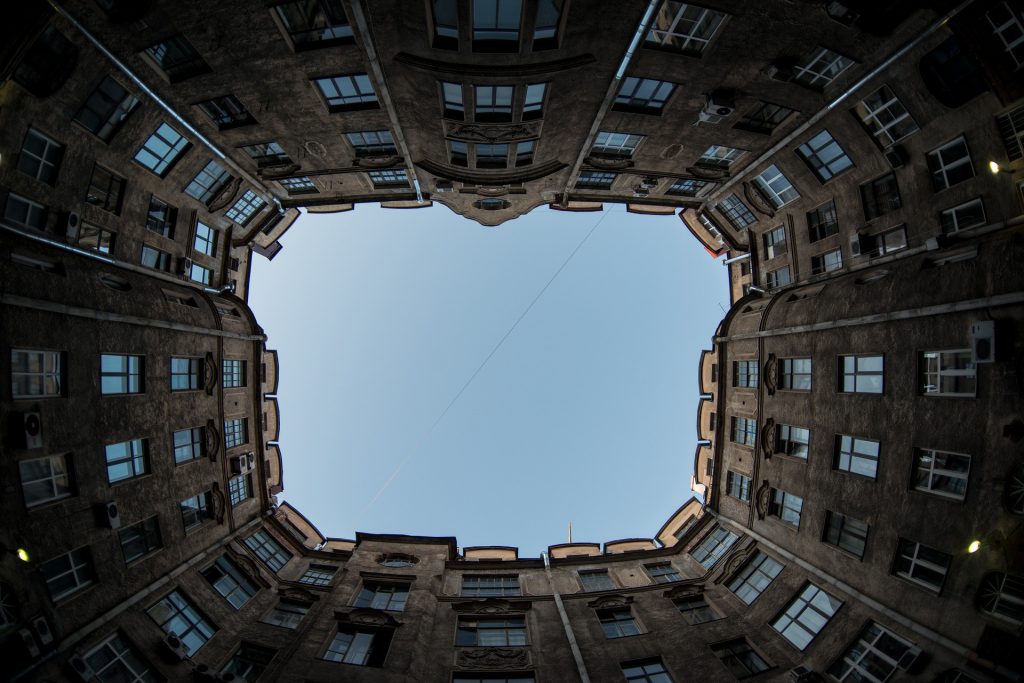 It is a well-known fact that St. Petersburg’s architecture is some of the most beautiful in the world, but what about the secrets behind it? I went on a guided tour of the stairwells and back yards of the city to find out a bit more. 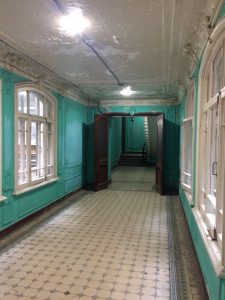 Inside the corridors today 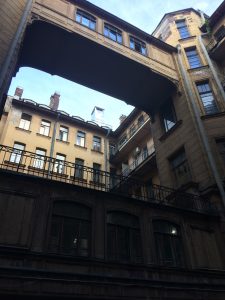 For anyone unfamiliar with the general layout of an apartment building in St. Petersburg, there is usually a gate or door at the front of the building, which leads into the двор – a kind of communal courtyard which the surrounding buildings look into. It is as if someone has taken a normal building, hollowed out the inside and stuck a yard in it instead. Our first stop was a двор where there were two raised corridors built between the buildings. Our guide explained to us that pre-Revolution, their function was to allow a family’s servants (usually living in the back buildings) to quickly access the front part of the house, where the family would be living. This kind of corridor is very rare in St. Petersburg, because the climate is not suited to this kind of architecture. Particularly interesting was how these mansions and apartments were transformed after the Revolution, when their aristocratic owners left them empty. They were taken over by the government and at least one more apartment would be built on every floor, so that everyone had somewhere affordable to live. The corridors became a communal space, with tables or sitting areas. 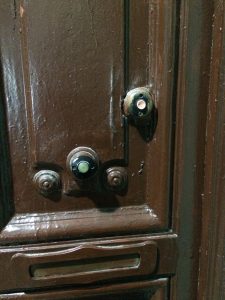 If you go inside, you can tell which apartments were newly-added, because for instance, on one floor there will be apartments 11 and 12, and then apartment 96. Of course, because one apartment would usually have several families living there (called a коммуналька), there are many buzzers on the door. Every family would have their own distinctive buzzer noise so that everyone inside knew who the guest was for. Some of the grandeur of the apartment buildings was never stripped away, as there remains windowsills made of marble, or stained glass in the windows, and beautiful frescoes on the ceiling. Our guide later pointed out that any building with plainly painted walls would almost definitely have been built or re-built at some point after the Revolution.

Round to the very back of the building, there was a larger-than-average window facing the North. It belonged to the apartment of Leon Bakst (1866-1924), an artist who gained international fame for his theatrical set design, nominally for the ‘Ballets Russes.’ His work is exhibited at the Russian Museum. The placing of this window was just so, so that he avoided the glare of the sun which would ruin his art, but still got plenty of light.

Our next stop was a stairwell we were guided into and told to be absolutely quiet once in the building. We crammed into a tiny lift two at a time and climbed into an attic, where there was an open window with a clear view of the city. Only a few of us were brave enough to clamber out and stand on the roof (it was a bad day to wear a skirt). Although I was reluctant to 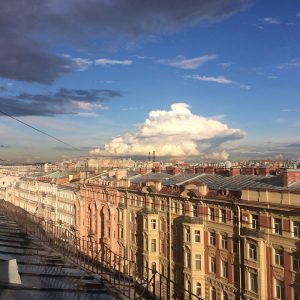 move about because it had been raining all day so the roof was slippery, once I sat down, the view was there to be taken in, and it was amazing. We could see as far as the top of St. Isaac’s and the Church of the Saviour on Blood. This has become quite the favourite pastime for thrill-seekers. The reason for the secrecy is that rooftop excursions are tolerated, rather than legal, although one tour group has been given official permission: доступ на крыши. 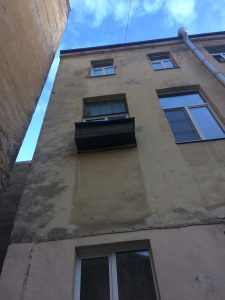 The last part of the tour included more meandering through streets and yards. In a yard which was essentially the leftover space between three apartment buildings, we noticed one wall built entirely without windows, so that if a fire started, it wouldn’t travel between buildings (in case of interest: this is called a ‘Brandmauer’, a German word literally meaning fire-wall). What looked like window boxes turned out to be ящики, which were once used as fridges. Some buildings just had some holes in the wall for ventilation, with presumably a space for food on the other side. We also walked past a building designed with all the main symbols of Ancient Egypt: sphinxes, pharaohs (Zakharievskaya ulitsa, 23). It was commissioned by L. Nezhinskaya in 1911, at a time of growing interest in the ancient world, and because he wanted something completely different to the usual architecture in St. Petersburg. Back in another stairwell, remnants of 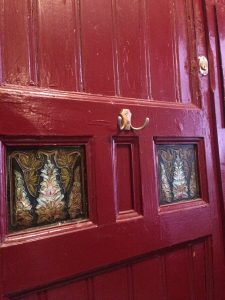 old lives were everywhere, providing an interesting cultural insight at the same time. For instance, because Russians tend to (and love to) carry lots of bags for shopping and other errands, there is sometimes a hook on the front door, so that when they get home they can hang up all their bags, leaving their hands free to get their keys out.

Overall, the tour was a very interesting experience and I loved exploring all the old buildings. Know of any corners in St. Petersburg with a story that needs telling? Comment below!

This post was written by Claire, currently studying Russian at Liden & Denz.

Hello! I'm Claire and I’ll be interning at Liden & Denz St. Petersburg until the end of August, exploring my love of travel, culture and food.