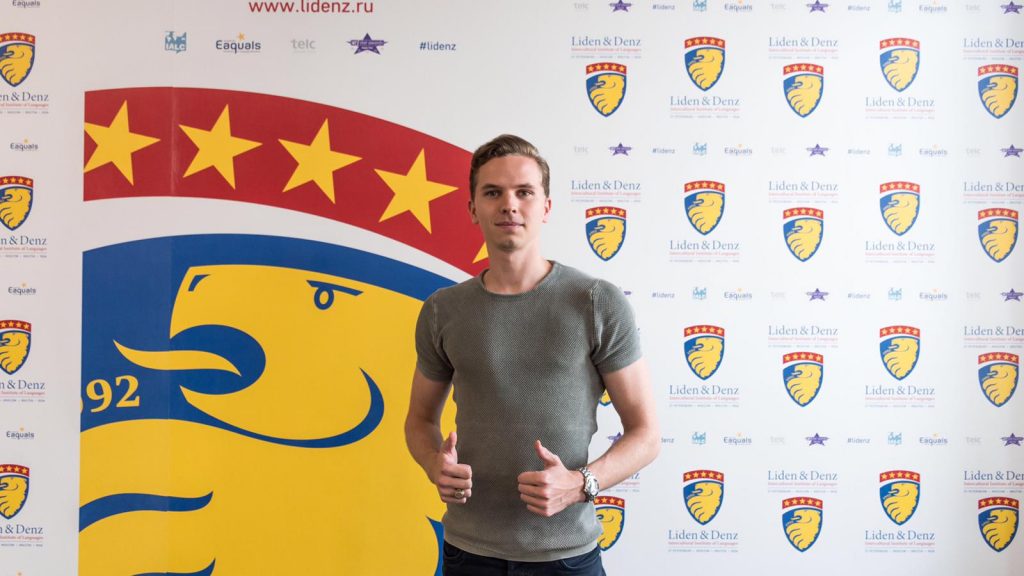 Nothing makes you think ‘It’s a small world, isn’t it’ more than bumping into someone you went to school with in the Liden & Denz reception area. But that’s what happened last week when I met Ricardo Posada, someone I haven’t seen since graduating from a school in Indiana, USA, in 2015 (spoiler- neither of us are American). Ricardo has an international background, having been born in Russia, and lived in the US, Brazil, Argentina, and Venezuela. I caught up with him to find out a bit more about his background, and why he’s with Liden & Denz studying Russian this summer.

What do you study and where?

I study philosophy and I’m doing a minor in Russian at Villanova University in Philadelphia.

How many languages do you speak?

The stereotypical question: Why Russian?

I was born in Siberia, and adopted when I was 6 months old, so I never got the chance to learn Russian properly. I started learning Russian in university about 2 years ago, but I noticed that the progress in the US was a little bit slow, I mean, the first full year we spent learning the alphabet! After one year studying in the US I did a month and a half at Liden & Denz and I just improved drastically. I skipped an entire full year of Russian at my university, just because of the month and a half that I did here at Liden & Denz, and I decided to come back this summer as well just to push myself further.

Why did you choose St Petersburg?

Last year, I felt like I would like the European vibe of St Petersburg just as an entry into Russia. I thought maybe of doing Moscow this summer, but I just liked St Petersburg so much my first time here.

Do you have any recommendations for people visiting St Petersburg?

One of my favourite places is Golitsyn Loft- it’s a four-floor building with a courtyard in the middle. Everybody chooses their ‘speciality’ bar, so for example there’s a rock bar, there’s a techno bar, there’s an EDM dance music bar. Also, the Russian Art Museum by Italianskaya Ulitsa, it’s really incredible. Peterhof is probably my favourite palace in the area with the gardens and the golden statues, as well as the Summer Gardens in the centre of the city.

Best story from Russia so far?

On Navy Day we met Putin. We were standing on the river watching the parade go by, and Putin comes in his boat and salutes the troops and gives a speech. After that we were just expecting him to come back out on the boat, but that’s not what happened. We started hearing a little bit of a commotion, and Putin started walking down the street with his generals, so we all lined up along the street. When he came into the audience I just split everyone apart and gave him a handshake. That was pretty amazing, like I still can’t comprehend how that happened.

Any tips for people starting to learn Russian?

Since you were born in Russia, does coming to St Petersburg feel a bit like coming home?

It’s strange because coming back to St Petersburg is like coming back to a super-aristocratic noble family area, because everything’s a palace, and I don’t think that’s the real Russia. I’m from Siberia, and this doesn’t feel like home compared to Siberia.

Do you have plans to visit Siberia?

Everybody should give Liden & Denz a chance to push themselves, to learn a new language, and Russian is a good language to learn!

Ricardo is currently studying at Liden & Denz in St Petersburg.

One response to “Interview with a L&D Student: Ricardo Posada”