Ivan the Terrible: the story of Russia’s expansion Today Russia is the largest country on Earth by area, and covers more than one-eighth of the planet’s inhabited land area. But how did it get to be so big? The answer to this question lies all the way back in the 16th century with the Russian ruler Ivan IV, known as Ivan the Terrible. Here is a short introduction to how he did it, as well as his reign and the important legacy he left to his country:

Ivan IV was the first Russian ruler to declare himself Tsar, and Russian word derived from the word Caesar, which after the death of the famous leader of that name was used to refer to all subsequent Emperors of the Roman Empire. This gives us an indication of the absolute power and authority with which Ivan the Terrible ruled over his dominions.  When he came to power in 1547, Ivan IV ruled over what was known as the Grand Duchy of Moscow, which he then renamed the Tsardom of Russia. Up until 1480 Moscow had been under the control of the Tartar-Mongols, forced to pay tribute to them in return for certain freedoms. Whilst Russia had overthrown their Tartar overlords by them time Ivan the Terrible came to the throne, the Tartar Khanate still bordered Russia and was a major block to Ivan’s dreams of expansion to the east.

Breakthrough – The siege of Kazan

The siege of Kazan (1552), the Tartar capital, proved to be one of Ivan the Terrible’s most important and influential military victories. This was a very noteworthy campaign, not least because its success paved the way for Russia to expand right across Siberia and all the way to the eastern seaboard. Hence it is considered one of the most significant events in the growth of what would become the Russian Empire. 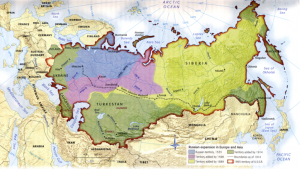 The Expansion of Russia through the ages

This campaign was also groundbreaking in terms of how it was fought. In preparation for it Ivan the Terrible became the first Russian leader to raise a standing army as well as introduce western military and siege technology. The centrepiece of these imported siege technologies was the Gulyaya Gorod, a type of moveable battlement, which gave the Russian rifleman precious cover from which to fire from in the exposed and open steppe as they advanced towards the walls of the city.

Legacy – The good and the bad

The conquering of Kazan signified the beginning of Russia as a multi-ethnic and multi-faith state, which it has remained until this day.  By 1553, after the conquering of Kazan and the remainder of the Tartar lands, Ivan the Terrible ruled over a territory larger than any other in Europe. The expansion into Siberia allowed Russia access to key materials and natural resources which would be key  in its continued quest to become a major world power for generations to come. But Ivan’s legacy did not end there. His concept of what the role of a Tsar should be influenced the Russian monarchy right up until its extinction nearly 400 years later. He believed himself to be personally appointed by God and his autocratic rule, in which his word and will was law, promoted a political culture which accepted and to a certain extent welcomed the strong rule of an autocratic ruler.

However whilst Ivan the Terrible certainly transformed Russia in the early years of his reign, he was also the cause of its downfall. His early military victories did nothing to quench his thirst for war. Having reached the peak of his strengths in 1553, his continued desire for conflict sent Russia into decline by the time of his death in 1584, the numerous wars he had waged left his country and his people exhausted, weak and nearly bankrupt. Ivan had also killed his first son in a fit of rage, effectively ensuring the end of the Rurik dynasty since his second son, Fyodor, an ineffective and weak ruler who upon his death in 1598 left no heir. The period which followed is known as the ‘Time of Troubles’ for good reason, during which Russia was engulfed by famine, civil war, and even foreign occupation which spanned three decades. 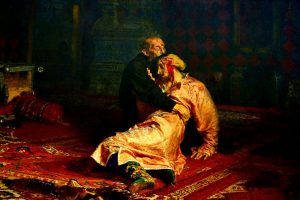 Ivan the Terrible and his son Ivan on November 16, 1581 by Russian realist artist Ilya Repin

The legacy Ivan the Terrible left his country was of vital importance as it continued to expand into the vast nation that it has become today.  Let us know which leader you think was the most influential in Russia’s expansion in the comments below!

Привет! I'm Louis and I am interning at Liden and Denz during my year abroad. I study Spanish and Russian at Cambridge University and am looking forward to getting to know St Petersburg and all its wonders!