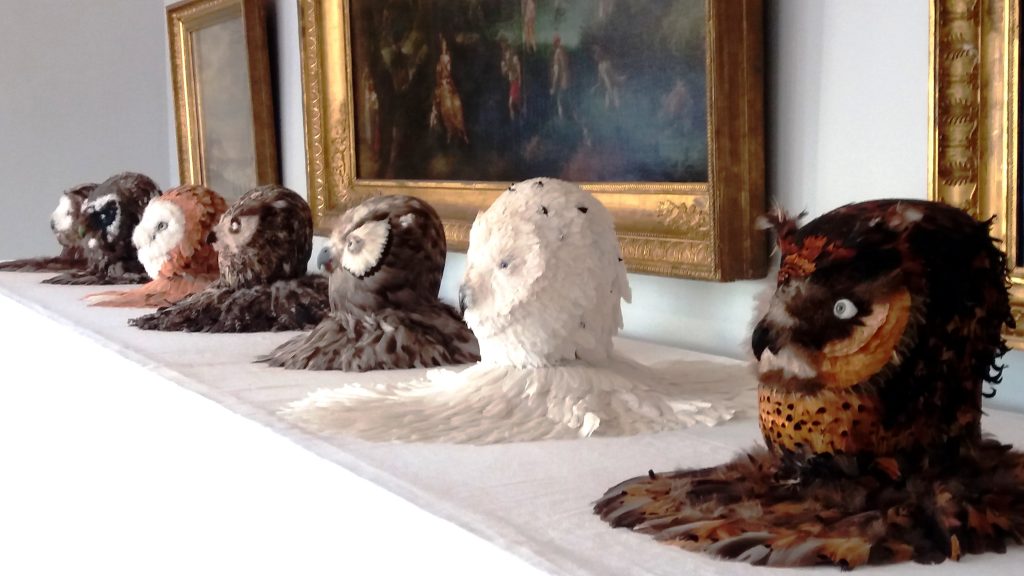 The Hermitage has opened its doors to one of the most famous and most discussed artists of the modern art scene: Jan Fabre. His exhibition ‘Knight of Despair/Warrior of Beauty’ features a multifaceted collection of more than 200 artworks, ranging from pencil sketches to a woman’s dress, made out of beetles.  The exhibition spreads over different rooms of the Old and New Hermitage, and therefore mixes in with permanent exhibitions of well-known Dutch and Flemish artists, like Snyders and Jordaens. Fabre himself stressed that he was influenced by these artists of the renaissance era. When the exhibition was first opened to the eyes of the visitors, it caused some strong reactions amongst parts of the Russian population, as some of Fabre’s works feature animal dead bodies and insects. However, luckily the exhibition is still running and can now be visited from 10.30- 18:00 on Tuesdays, Thursdays, Saturdays and Sundays and from 10.30-21.00 on Wednesdays and Fridays. The best way to visit the exhibition is to start in room 260, the Apollo Room, and continue to walk through room 261, 262, take a turn to the left to 258, 257, 248 and finish the exhibition in room 243. 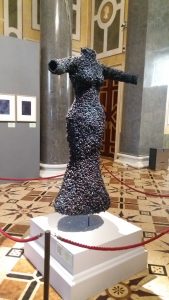 Knight of Despair/ Warrior of beauty

The idea of the exhibition is realized as an installation, featuring sketches, paintings, sculptures, short films, lectures and round-table discussions.

Imagine Jan Fabre entering the Hermitage, disguised as a knight of despair. He walks through the building and admires the works of his fellow countrymen. With every step he transforms himself from a knight of despair into a warrior of beauty, adding his own works to the exhibition.

Fabre used the figure of the warrior as a requiem of the past travelling to the future – our present. Thereby he initiates a unique dialog between past and present. The knight’s, not to say Fabre’s works, pick up old classic renaissance topics of ‘vanitas’ (transience) and ‘metamorphosis’ and put them into a new, modern shape and context. The warrior’s path begins on the 2nd floor of the Old Hermitage in room 260 and consistently with the renaissance topic of the unstoppable forward movement of time he makes his way into the New Hermitage. 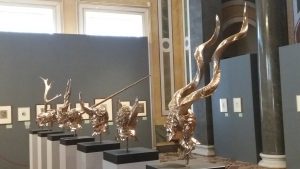 The visit to the exhibition was a unique experience. I warmly recommend going there in case you will be in St. Petersburg in the upcoming 3 weeks. What struck me most was the overarching concept of the exhibition. You would not only see the entire repertoire of Fabre’s skills, but also get an idea of where he drew his inspirations from, since his works are arranged right next to preceding works of other artists. The exhibition became more and more fascinating to me, the further I moved on, as the pieces also become more and more provocative, plastic and organic. A must-see are Fabre’s famous ball point paintings. He drew entire large scale pictures with blue ball point pens. From further away they look like a plain blue landscape, but if you move closer, you will see that they are actually nudes. Also, you should not miss the large scale pictures, which center around the topic of vanitas. They are made entirely out of beetle wings and shimmer in mysterious shades of green and blue. My personal highlight were the self-portraits of Fabre in the form of golden sculptures. They illustrated to me, how he himself does not see art exclusively as a serious instrument to reflect on society, but also as something that might just make you have a little chuckle. There were so many more interesting and beautiful pieces of art, which I have not managed to write about, so for additional information I would recommend you to download the official exhibition guide which comes bilingually in English and Russian! 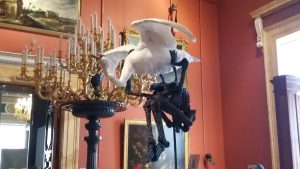 I would like to conclude this blog by saying that anyone who is interested in modern arts and open for new approaches to the creation of artworks, should not miss Fabre’s exhibition in the Old and New Hermitage!

The entrance to the Hermitage is free for ISIC card holders  and for normal visitors it is 600 rubles. Also, there is also an audio-guide available for iPhone-users.

This blog was brought to you by Ayla, currently studying Russian at Liden and Denz.