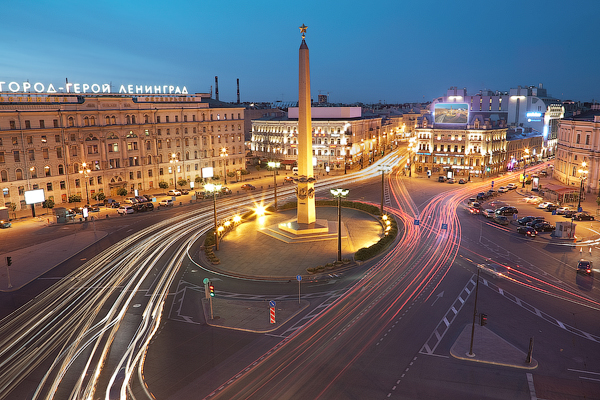 Обелиск «Городу-герою Ленинграду» (Leningrad Hero City Obelisk) is located in the centre of Площадь Восстания (Ploshchad Vosstania). This obelisk is the first thing you see when you get out of the train station Московский Вокзал (Moscovsky Vokzal): it stands in the middle of the square surrounded by massive buildings and looks towards Nevsky prospekt. If you arrive to Saint Petersburg by train what will be waiting for you is an astonishing view of Nevsky prospekt from the Obelisk.

The star-shaped obelisk is known as «oтвертка» (the screwdriver) among the other monuments in Saint Petersburg. It replaced the statue of Alexander III, so-called «бегемот» (the hippopotamus) that now stands in front of Мраморный дворец (Marble Palace).

The monument was installed in the square in 1985 on the Victory Day, and awarded to the city for its defensive role during World War II. Designed by the architects Alexander Alymov and Veniamin Pinchuk this impressive obelisk is 33 metres high and is crowned by the Golden star of the hero- city.

Город-герой, the Hero city is a soviet honorary title that was awarded to twelve cities of the Soviet Union for their heroism during World War II (the Great Patriotic War). The cities which have this honorary title are Saint Petersburg (Leningrad), Volgograd (Stalingrad), Kiev, Sevastopol, Odessa, Moscow, Kerch, Novorossiysk, Minsk, Tula, Murmansk, Smolensk, and then they added the Brest fortress too.

Saint Petersburg was one of the first cities to receive the honorary title, since it greatly suffered from the Siege of Leningrad. During this terrible human tragedy, that lasted for 872 days from September 8, 1941 to January 27, 1944, thousands of people froze or starved to death. Of 3.5 million of people living in Leningrad before the war only 700,000 people were left alive, and it’s estimated that 1.5 million people both civilian and military died during the blockade.

Now the Hero City Obelisk is one of most important monuments in honour and remembrance of the heroes and heroines of Leningrad that witnessed and died in the Great Patriotic War.