Vladimir the Great, Monument to a Russian Hero… or is it? 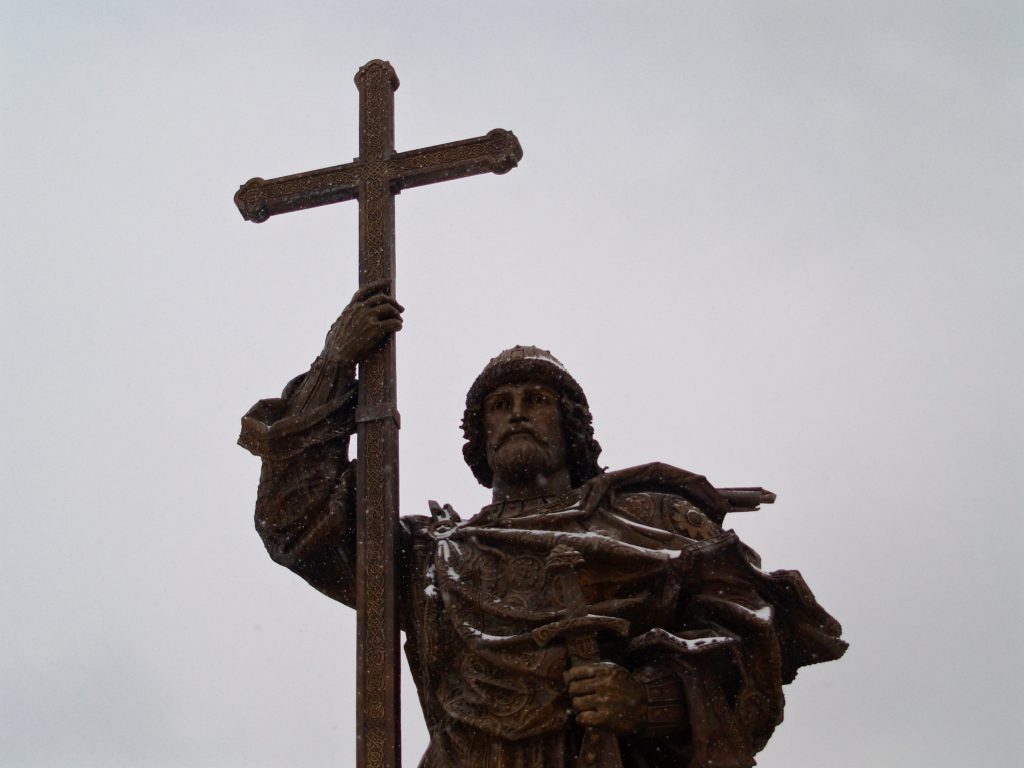 A recent addition to the centre of Moscow has been turning heads. From its very conception over two years ago to its unveiling on 4th November 2016, the monument to Vladimir the Great (Владимир Святославич/Владимир Великий) has been a point of heated discussion. The statue takes the form of the historic Grand “Knyaz” (or Prince) of Kiev who later became one of the greatest leaders of Kievan Rus’, bringing Orthodox Christianity to the state and creating the foundation of what was to become the foundations of Russia, Ukraine and Belarus. Many historians claim that Vladimir’s successful ruling of Kievan Rus’ allowed the period to become the first in the history of modern-day Russia, and his Christianisation of the kingdom provided the foundations of Russian culture. It seems, therefore, that he is perhaps deserving of commemoration in the centre of the Russian capital, though not everyone is so sure.

Who was Vladimir the Great? 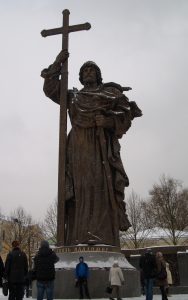 The statue is tall and formidable

Firstly, Vladimir is not considered by all as a man that should be too highly praised. Yes, he may have achieved much as head of state, but he did so through violence and ruthlessness. It may seem that ruling with threats and bloody military campaigns is part and parcel of a middle age reign, but perhaps 2016 is a bit too late in the day to be remembering Vladimir whilst ignoring his flaws. According to some sources, Vladimir maintained not only strict control over his kingdom, but also over his 800-odd concubines and numerous wives. Many would be quick to brush aside this trivia as yet another “sign of the times”, yet I can’t help but question whether this is an acceptable attitude anymore. Once upon a time, the patriarchy would have perhaps congratulated him on such effective time management and so-called “pulling power” (and alas perhaps still would even now), but the patriarchy of today deems these aspects of Vladimir as irrelevant in comparison to his “noble” character and high achievements in other spheres (where have I seen examples of that recently?). But this is not even the most controversial statue to have been built in honour of arguable tyrants in Russia of late: last month a statue was erected in Oryol depicting Ivan the Terrible and recently even Stalin has been making reappearances across the country in stone.

Arguably tyrannical rule aside, Vladimir is undeniably the ultimate symbol of Orthodox Christianity in Russia, and the plonking of a 17.5 metre statue next to the Kremlin says a lot about the position of religion in the country. Vladimir chose Christianity of the Eastern variety as his preferred religion sometime in the year 987, his envoys having been impressed by Constantinople’s welcome and presentation. He went from passionate pagan to devoted Christian after what The Primary Chronicle seems to describe as a sort of middle-ages Blind Date: the holy matchmakers presented Vladimir with information about various religions whose capitals they visited, and he picks his favourite to become madly passionate about without having met with it himself. This rather capricious (or so it seems to me) way of choosing a state religion indeed formed the basis of much of Russian culture and history, but this aside, it is very telling that the current state approved such a religiously symbolic, ahem, erection. In a time when many other states are tackling the big issues, such as LGBTQ+ and women’s rights, it seems that here, conservatism is king. 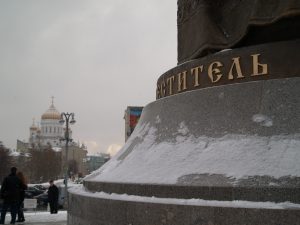 Two symbols of Orthodox Authority, one old, one new

Where would be the best place for Vlad?

Okay so Vlad doesn’t necessarily have all the right credentials or symbolic potency to justify his figure being enlarged and stuck to a plinth near the Kremlin walls in 2016. I mean, he didn’t even really technically have anything to do with Moscow as the city was only mentioned for the first time some century or so after his death. Novgorod, where he was once Prince, would have been a much more accurate place for the statue on Russian territory. Furthermore, his construction has been a controversial topic amongst Muscovites for other reasons: the original plan was to put him up on the viewing point of Sparrow Hills, but an online petition was signed by tens of thousands of locals claiming he would ruin the architectural ensemble already established there. Though it may not have been the petition that led to his new location, as construction experts who were concerned that the hill could not support his weight and feared an eventual landslide rightly voiced their concern. The new spot on Borovitskaya Square (Боровицкая площадь) was selected by Muscovites from a choice of three central locations, but the final choice was disputed by UNESCO, who warned that such a change to the landscape of the area surrounding the Kremlin could lead to the historical fortress being removed from their World Heritage Site list. The plans for the statue therefore were altered: he now stands at a mere, though actually still rather mighty, 17.5m (without his pedestal), as opposed to the planned 24m. The Prince even came a year late to the Russian capital, as he was originally supposed to be revealed on 4th November 2015, the Knyaz’s millennium celebration. 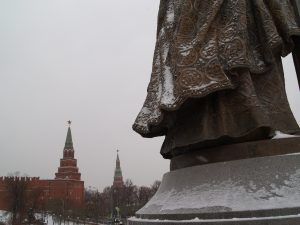 The Kremlin looks out at Vladimir, who in turn keeps watch on Moscow

So if he has caused so many problems and controversies, why on earth was he built? Well you can’t deny that he is attracting attention. When I visited today, a sizeable group of people had come to see the monument, though my chief concern is his positioning on a busy and main junction… we do not want to be turning the heads of drivers now, do we? He is impressive. He is beautifully made and detailed. He is a little bit scary. He is also not the only Vladimir in the vicinity. Many critics and journalists have long ago made this comparison, and who knows, maybe Vladimir Vladimirovich likes to look out over the walls of the Kremlin and imagine he sees a bit of himself in that powerful, resolute, memorable man. Maybe this is his big tongue-in-cheek addition to the central Moscow cityscape – heck, he even got Patriarch Kirill to bless it! Or maybe it is just another statue: money was spent and selfies will be made, and the whole thing has been blown way out of proportion. Well, Vladimir the Great has been at least, though whether in size or stature remains unclear.