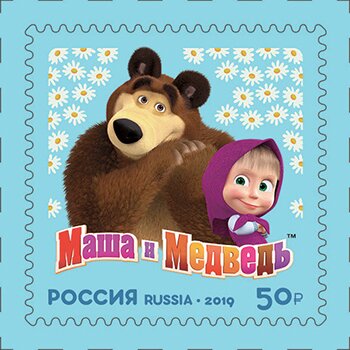 As we humans love music, it is to be expected that the audiovisual material we consume the most is music videos. Therefore, hits such as “Despacito”, “Shape of You” and “See you again” are in the Top 5 in the ranking of the most played videos on YouTube. But the interesting thing is that, within the top 10 most viewed videos on this social network, only 5 are music videos, and the other 5 are children’s content. And yes, believe it or not, the 8th most watched video worldwide on YouTube is RUSSIAN, and it is none other than the Russian cartoon “Masha and the Bear” (Маша и Медведь), of which I will tell you a little bit about below.

What is this show about and why did it become so famous?

Masha is a small, mischievous and curious Russian girl who lives in the forest with her unconditional, faithful but unusual friend: a kind and patient bear, retired from circus life, who takes care of Masha and at the same time acts as a kind of mentor/father to her. The episodes of this series show you the different adventures of these two characters and their friends, and there is usually a small moral lesson behind each episode.

The great success of the series lies in the ease of the plot, so that people from all countries and even from a very young age can understand what each episode is about, even without necessarily having to understand the language.

Another reason why the series has had such a big boom is a simple one: children. The market for children’s entertainment is huge, and so, as I mentioned at the beginning, it’s no wonder that half of the most watched videos on YouTube are content for little ones (Baby Shark being the most watched video worldwide so far, for example). Thanks to today’s technology, channels like YouTube have become a strong ally for parents when it comes to entertaining their children, and as we all do from time to time, one Netflix episode turns into four, and this ultimately results in an incredibly large number of views.

Finally, religion is also said to be an important factor in the high number of plays of this cartoon’s videos. Why? You see, in most of the episodes, little Masha is wearing a traditional Russian garment that is usually worn in somewhat more remote regions (fields/forests/meadows), and which includes a kind of small cloth that covers part of the head. This garment can be interpreted as a kind of “Jihab”, a traditional Muslim head covering.

Therefore, this cartoon may appeal to people who practice Islam, not only because of the religious theme, but also because girls who practice this religion can identify with little Masha. This last point has not been talked about much, but it is known to be a reason (even a very important one) for the success of this Russian cartoon and why people all over the world consume it. You can find an interesting article on this topic by clicking here.

Although the dialogues are very short, this series can be a great exercise for practising a bit of Russian, both in comprehension and oral production (of course, if you are only just getting started). There have even been times in Russian classes when we have watched an episode and then had to tell in Russian what it was about. This is a good exercise to start practising and to lose the fear of speaking in this beautiful but difficult language.

More caricatures that might interest you (or your children, nephews, nieces, cousins… ) ?

If you are interested in learning more about Russian cartoons and learning a little Russian with them at the same time, or even if you just have children or grandchildren, cousins or nephews and nieces that you want to share some great Russian cartoons with, then be sure to check out these articles on our site.

Oh, and by the way! … If you want to watch the video that was so much talked about in this article, here you go: