Opening of the Bridges 2014

Despite the snow we had yesterday (feel lucky we only got a few flurries – Moscow was buried under 17cm!), the ice has finally melted in the Neva and the bridges were opened for the first time this year last night, a whole month earlier than planned!

Thanks to an unseasonably warm March, during which Moscow saw a record-breaking high of 17 degrees, the bridges in St Petersburg were opened to allow ships to cruise up the Neva and bring in their cargo.

During the winter, we don’t need to worry about getting home from an evening out, as there’s no risk of potentially being stranded on one of the islands. During the summer, it’s a different story, as the bridges follow their own timetables and you need to carefully plan your way home so that you don’t get stuck!

The bridges tend to be open for just a couple of hours at a time, so you wouldn’t have too long to wait, but in order to help you avoid these circumstances, here’s the timetable for the main bridges: 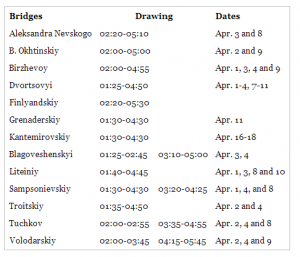