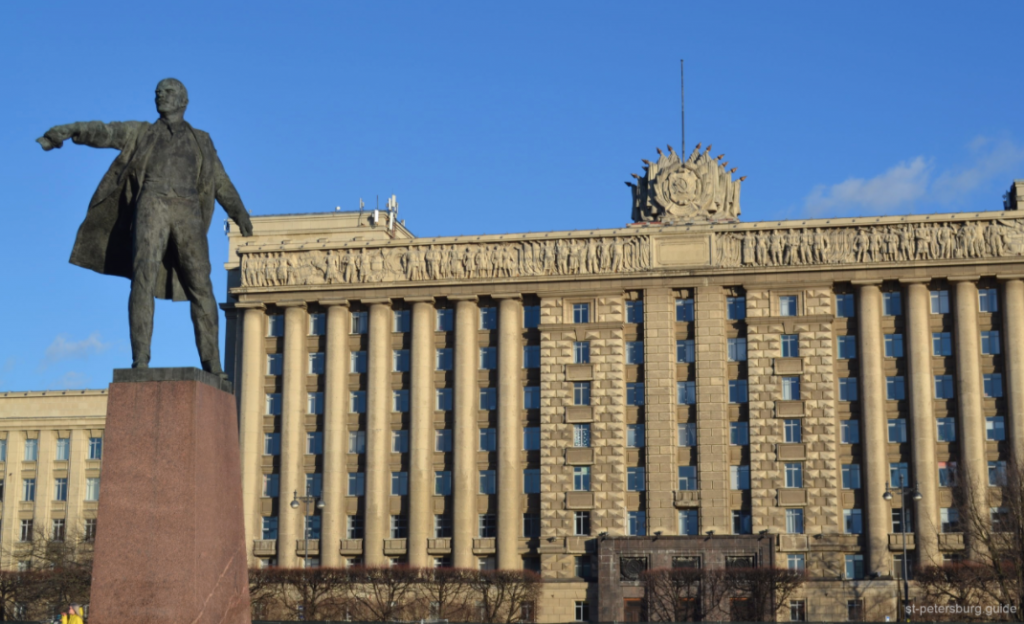 It may seem that the tourist trail in St Petersburg is all about the city’s imperial past: the palaces of Peter the Great and Catherine the Great, the Peter and Paul Fortress and the Fabergé eggs.

But, if you only know where to look, you can delve into a different facet of the city’s history: its Soviet past. From the buildings that played host to the Bolshevik revolutions of 1917, to relics of the Leningrad Blockade, St Petersburg is brimming with Soviet relics. Many of the city’s most famous imperial landmarks even have Soviet stories to tell….

This building is one of the finest examples of Stalinist architecture in St Petersburg, adorned with a 14-column portico and the emblem of the Russian Soviet Federative Socialist Republic.

The House of Soviets was built in the late 1930s, with the intention of housing the administration of the Leningrad government. However, since construction was only finished just before the Nazi invasion of the Soviet Union, the building never fulfilled its intended purpose. Instead, in 1941, it began to be used as the military headquarters of the red Army. After the war, it housed scientific institutions and today the building is a local administrative office.

You can easily catch the metro to Moskovskaya to see the House of Soviets: it is located right next to the north-east exit, for Ulitsa Tipanova. 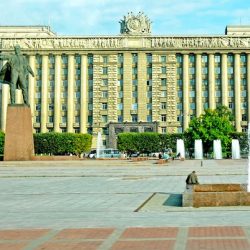 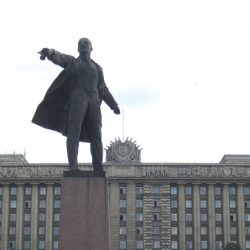 The Smolny Institute was originally commissioned, by a decree of Catherine the Great, as an institute for Noble Maidens. Despite  its imperial origins, it has particularly strong Soviet connections. Notably, just before the October Revolution in 1917, it became the Bolshevik headquarters. The institute was also Lenin and his wife’s place of residence until they moved to Moscow in 1918.

Moreover, it was  the site of the assassination of Bolshevik leader Sergei Kirov and served as the site headquarters of the Leningrad Front during the siege of the city. Today, part of the Smolny Institute houses the Lenin Museum, which is one of the few Lenin museums still in existence, whilst the remainder acts as the official seat of the St Petersburg mayor. 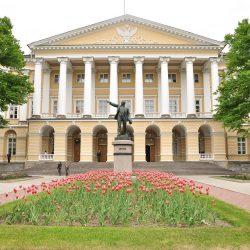 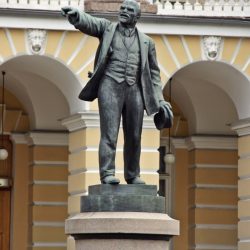 The Cruiser Aurora is not only the oldest surviving ship of the Russian Navy, but fired blanks shots on the night of the storming of the Winter Palace, thus marking the beginning of the October Revolution.

The ship also played a role in the Leningrad siege: during this period it was moored at Lomonosov and was constantly shelled and bombed. Despite being significantly damaged, the ship was raised and taken for repair in July 1944.

The Cruiser Aurora subsequently became a museum in 1956 and can still be visited today. Of course, you can also take in the ship from the embankment- simply head to the Nakhimov monument on the Petrogradskaya Embankment to get the best view. 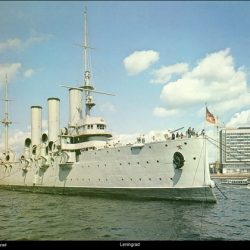 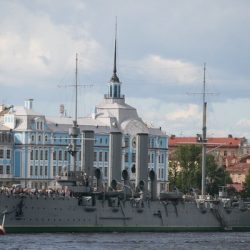 The Finlyandsky Railway Station is just a 15 minute walk north of the Cruiser Aurora. This is not just any railway station: it is where Lenin arrived in St Petersburg in April 1917, after 17 years in exile, and again arrived in October 1917, disguised as a railway fireman. In fact, the train on which Lenin returned is still on display at the station!

Significantly, during the Siege of Leningrad the Finlyandsky Station was the only Leningrad station in use. The railway connected the city to Lake Ladoga: the essential supply route across which supplies arrived, via the so-called Road of Life.

If you visit Finlyandsky Station, make sure to take in the statue of Lenin, erected in 1926, that can be found near the square outside the station: it is one of the few remaining statues of Lenin in St Petersburg. The constructivist statue, designed by Sergei A Evseev, depicts Lenin making a speech from the top of an armoured car upon his arrival at Finlyandsky Railway Station. 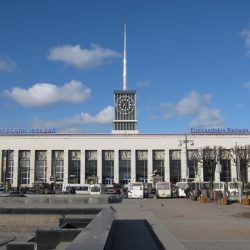 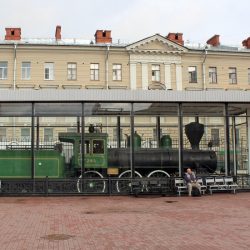 The Field of Mars has an extremely long and varied history. What began as a bog was transformed first into a training ground for imperial guards regiments, and then into a beautiful green pleasure garden.

Its function during the Soviet era was equally diverse: victims of the February Revolution were buried in the centre of the field in 1917, the park acted as a vegetable garden during during the Siege of Leningrad, and in 1957 the Eternal Flame was lit on the Field of Mars to remember those who died in St Petersburg’s revolutions and wars. 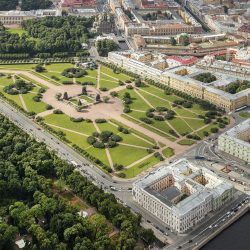 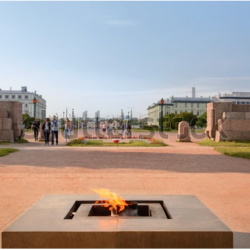 As well as being a symbol of tsarist power, the Winter Palace served as the stage for the events of the October 1917 revolution. Despite Eisenstein’s famously triumphant depiction of the event, the storming of the Winter Palace was actually less of a storming and more of a capitulation.

After the Bolshevik Revolution many imperial emblems were removed from the palace and many of its treasures were dispersed. However, following the Siege of Leningrad, efforts began to restore the palace of its original condition. Today, it houses part of the State Hermitage museum: one of the most popular attractions in the city, with 4.5 million visitors per year. 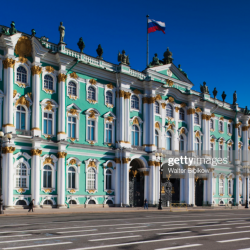 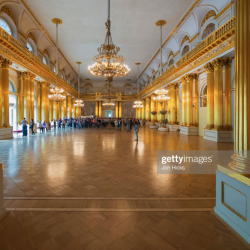 Although best known as the original citadel of St Petersburg where, according to legend, Peter the Great founded the city, the Peter and Paul Fortress has an intriguing Soviet history. During the February Revolution the fortress was attacked by mutinous soldiers of the Pavlovsky Regiment, and under the Provisional Government hundreds of tsarist officials were held in its cells.

The fortress also played a role in the October Revolution: it was from here that shells were fired at the Winter Palace, which had been occupied by the Bolsheviks, and here that the ministers captured at the palace were held as prisoners. 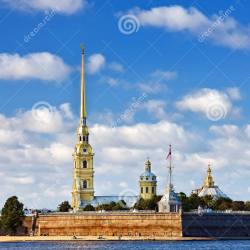 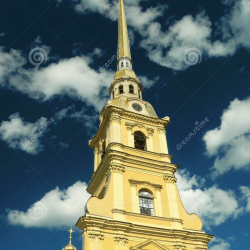 State Museum of the Political History of Russia

The State Museum of the Political History of Russia covers much of the city’s Soviet history, from the lead-up to the Russian Revolution, to the collapse of the Soviet Union in the early 1990s.

The building itself served as a Bolshevik administrative centre in the lead up to the October Revolution, and Lenin made a historic speech from one of the balconies after his arrival in St Petersburg in 1917. Within the museum you can even visit Lenin’s one-time office, where he worked between the February and October Revolutions. 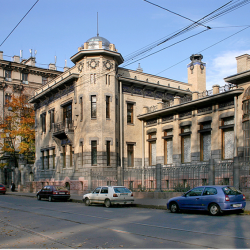 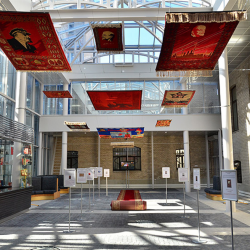 This museum tells the harrowing story of the defenders of Leningrad during the city’s 872 day siege. It is flanked by two anti-aircraft guns and contains some fascinating exhibits chronicling both the military and civilian aspects of the blockade.

The museum itself has an extremely rich, and troubling history: opening four months after the blockade was lifted, the museum was shut just three years later, and its director shot, as Stalin repressed this aspect of the city’s history. It was not until 1985, during the period of glasnost, that attempts were made to reopen the museum. Most of the displays here are in Russian, but the English-language audio guide is pretty good and it is definitely worth a visit. 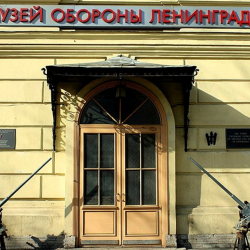 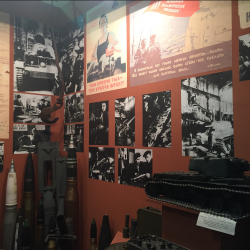 Monument to the Heroic Defenders of Leningrad

This monument is located in Victory Square, right at the end of Moskovsky Prospekt. It was designed by Sergey Speranskiy and Valentin Kamenskiy and was erected in 1975, 30 years after the end of the war, to commemorate the victims and survivors of the Siege of Leningrad.

The monument centres around a 48-metre-high obelisk, which is surrounded by a 124 metre granite ring lit with gas torches. Beneath the monument is a vast underground memorial hall, with an exhibition dedicated to the siege. 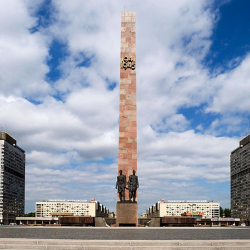 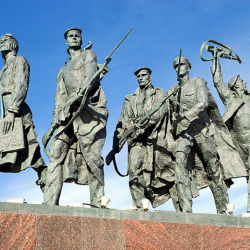 If you are lucky enough to be in St Petersburg, make sure to give some of these fascinating landmarks a visit. For more places to visit near Liden and Denz’s St Petersburg school, take a look at https://lidenz.com/top-things-st-petersburg/.