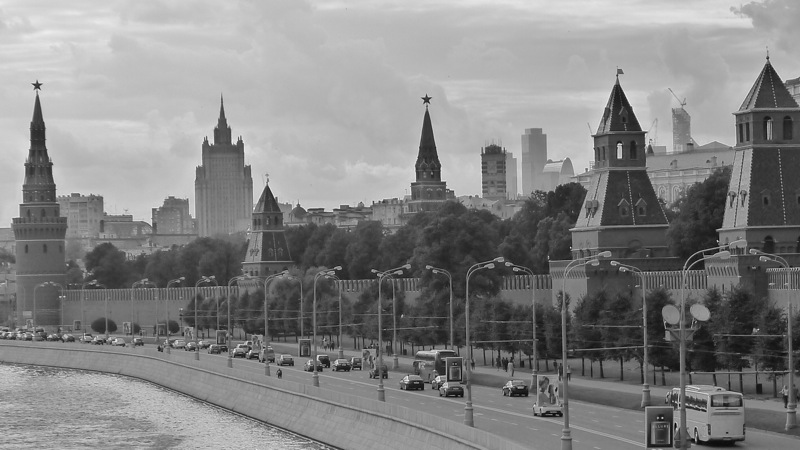 The Red Square is without doubt one of the liveliest places in Moscow. This afternooon the neighbourhood was particularly busy as it is already in a festive mood for Moscow’s birthday.

First of all, today started the festival Московская осень (Moscow’s Autumn) that will last until the 11th of September. Just at the entrance of the Square have been set up little stands within the frames of this festival. This particular attraction is called Sovetskiy obed or soviet lunch. The various kiosks sell products you could have found during the time of the USSR. Especially tempting were boxes of industrial blinis with either meat or jam, depending on your preferences.

I warmly recommend you visit the GUM. The world renowned department store is currently beautifully decorated to the colours of the золотая осень (golden autumn), a particularly appreciated season in Russia. An awe-inspiring exhibtion by Van Cleef & Arpels is currently taking place in the first “line” of the department store. The exhibtion is dedicated to clips, a versatile jewel that can be used on hats, in your hair, on your clothes as show various advertisments from the last century. Ads, photographs of stars and models are displays in the alley whilst within the shop, are displayed various clips from past collections (1910-1970). One of my personal favourites is the bestiary collection which is displayed in the shop, but unfortunately cannot be photographed.

Another fun attraction to check out is the outside exhibition “Moscow in cinema” on никольская улица.

Here various soviet films set in Moscow are described. One I am particularly keen to see is Я шагаю по Москве (…) as it is was filmed in various areas I am very familiar with in Moscow, especially chistoprudniy bulvar. These films which where produced at the time of the USSR are a great way to receive an honest insight on Russia’s culture, history and mentalities. They are also very interesting to compare with contemporary Russia. It is of course impossible to understand Russia’s present without knowing its past, without knowing what peoples’ lives were like. And anyway, watching films might be the best way to learn a language. So if you don’t really fancy on a Friday afternoon going through your notes or reading a new text, give yourself a break and just watch a nice Russian film. Half the effort and same results!