An Afternoon at the Shooting Range

Reservation required! The club asks for 1-2 days notice to ensure the time requested is available. 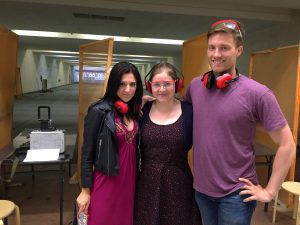 Last week, after a particularly gruelling grammar session, our teacher Anya suggested an outing to the shooting range near the Victory Park (Парк Победы) Metro Station. I certainly didn’t wake up that day thinking I’d be firing off a few rounds, but they say to always say “yes” when you travel, right? I’d only ever tried it once before in Eilat, and it was quite a memorable experience then, so off to target practice we went!

It took us about half an hour to get to the Club by subway and we arrived about 15 minutes before our timeslot. I’d recommend arriving early, as there are several forms to sign and go through before they allow you into the range. There were four of us, and two who couldn’t speak Russian too well, so I finally had a chance to flex my interpretation skills 😉 Another important note: if you are going with a group without a fluent Russian speaker, you will need to pay an additional 700 rubles for a translator.

With the formalities taken care of, we were assigned an instructor who led us up to the range. Jesse and Anaïs chose the big guns, Kalashnikovs, while Anya and I were recommended the more “feminine” Glocks as we were less experienced. For the Kalashnikovs, the target was set at a distance of 50m, and because of the force released from the arm, they had to shoot from a seated position. For the Glocks, we only had to aim from 25 metres away. 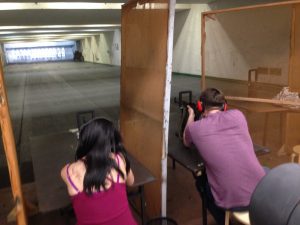 We each had 20 rounds and the instructor showed us how to safely load the gun, how to aim at the target, and also walked us through the safety process. Most importantly, point forward and far away from anything moving! It’s difficult to describe the sensation, but as you pull the trigger, the power that courses through your hands as the bullet leaves the barrel is, in a word, immense. 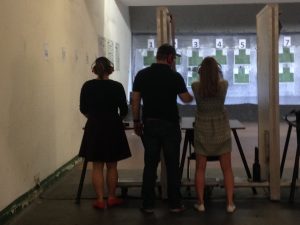 It seemed like an eternity, but in reality, we were in and out in 30 minutes.  Besides being exhilarating, this is actually a great way to clear your mind. Not only does it require complete focus, the fact that there is very real and immediate danger forces you to be extremely mindful and in the moment.  You are solely concentrated on the target, and you are aware of each breath and movement your body makes. This may be an excursion the school organizes on a regular basis, so be sure to find out when you arrive. 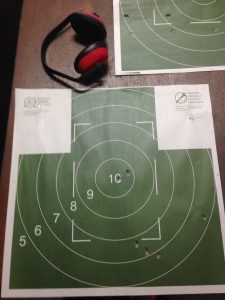