Russian cuisine is delicious and varied, but meat does play a large role in the national diet. After all, this is a country famous for its kotleti (котлеты), shashlik (шашлык), and borscht (борщ). So how can a vegetarian try some traditional Russian food? Surprisingly, meat-free meals aren’t that hard to find, and plenty of dishes can be adapted to make them vegetarian. Here’s some of the best Russian vegetarian dishes!

Shchi (щи) is a cabbage soup that is simply delicious! It’s a very old Russian dish, dating back to the ninth century, and is traditionally made from cabbage/sauerkraut, meat, potatoes, carrots, onions, and various spices. It can be made vegetarian by simply removing the meat and using vegetable broth. Shchi is so important to the Russian diet that there’s actually a proverb about it: ‘Щи да каша – пища наша’ (Shchi and porridge are our native foods). 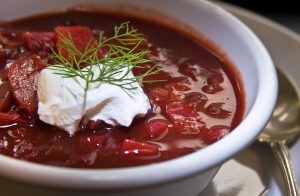 Like shchi, borscht is normally prepared with meat, but can be made vegetarian by omitting this ingredient. Originally from Ukraine, borscht is hugely popular in Russia. Beetroots are at the heart of this dish and they give the soup its distinctive red colour. Carrots, potatoes, onions, and cabbage are also added. The soup is a tasty blend of sweet and sour and is usually served with sour cream (сметана).

If you like sour flavours, solyanka (солянка) is for you! This soup can be made with meat or fish but the vegetarian version is also popular. It is quite thick and contains pickled cucumbers, salted mushrooms, cabbage, tomatoes, onions, vinegar, and brine. Lemon zest is often added and the soup is served hot with lemon slices and sour cream.

Okroshka (окрошка) is the perfect refreshment in the hot summer months. This cold soup is a simple mixture of spring onions, cucumbers, potatoes, hard-boiled eggs, and dill, which is all combined with kvass (квас, a sour drink made from fermented rye bread), sour cream, or kefir (кефир, a fermented milk drink). The vegetables should be chopped very finely, as the name of the soup is derived from the verb крошить, which means to crumble.

Another great vegetarian dish is blini (блини). These are particularly popular during the Orthodox festival of Maslenitsa (Масленица). Blini have been around for a long time and there were symbols of the sun in Ancient Rus. They are traditionally made form buckwheat flour and served with sour cream. Blini can either be savoury (mushroom and cheese are my favourites!) or stuffed with fruit to make them sweet. 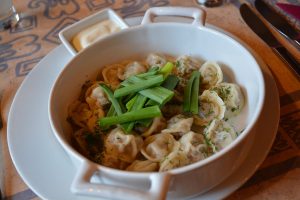 Pelmeni (пельмени) are small Russian dumplings which are very popular out here! They can be stuffed with meat, but vegetarian ones usually contain mushroom or mashed potato. Pelmeni are very simple to make, as the dough is just flour and water, and Russians even have special machines (пельменицы) to help make them. Despite this, frozen pelmeni are easy to buy and can be prepared in a few minutes.

If you want something a bit heartier, try some pirozhki (пирожки)! These are small pies stuffed with different fillings. Vegetarian pirozhki normally contain mashed potato, mushroom, egg, or cabbage. You can also get sweet ones which are stuffed with fruit or cream cheese (творог). Pirozhki are a popular street food as they are easy to eat on the go.

Oliver salad (салат Оливье) is a traditional Russian salad dating back to the 1860s, when it was invented by the Belgian chef Lucien Olivier. Olivier was the head chef of the famous Moscow restaurant ‘Hermitage’ (‘Эрмитаж’) and the recipe was a closely-guarded secret. However, it soon became public knowledge, even though the modern-day salad is far removed from Olivier’s original creation. It contains boiled potatoes, gherkins, peas, eggs, carrots, and meat (which you can remove to make it vegetarian), which are all cut up into small chunks and generously dressed in mayonnaise. 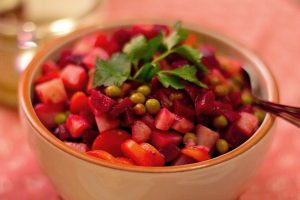 Vinegret (винегрет) is one of my favourite Russian dishes! It’s made from beetroots, potatoes, carrots, onions, and gherkins. Sometimes sauerkraut is added as well. Despite the name, the vegetables are dressed in olive oil and just a small amount of vinegar. Vinegret gets better with time and the leftovers are as equally delicious as the first mouthful.

Hopefully this has shown that there is more to Russian cuisine than platefuls of meat! Why not give some of these meat-free dishes a go? Take a look at the Liden and Denz blog for more posts on Russian culture!

This post was brought to you by Tilly Hicklin, currently studying Russian at Liden and Denz, St. Petersburg.