Liden and Denz: The Best Way to Achieve Your Russian Language Goals in 2023 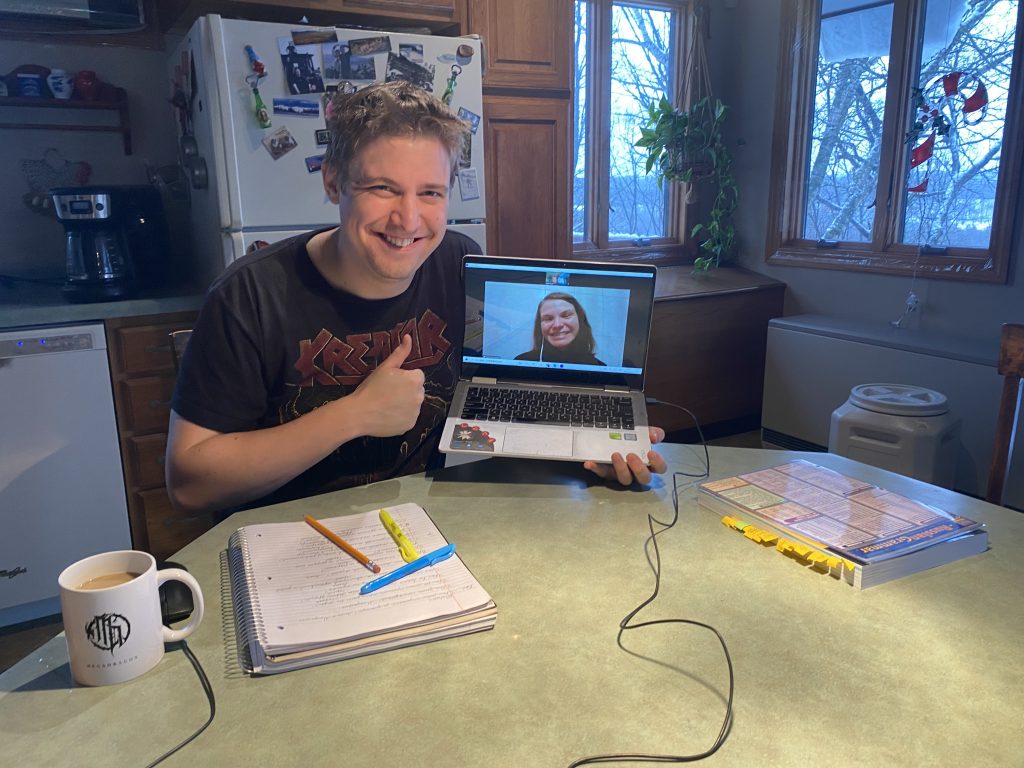 Some time ago, we interviewed our student Nathan Paul, who studied Russian at Liden & Denz St. Petersburg in 2018 and 2019. Almost two years have passed since our conversation, and Nathan continues to learn Russian online with us. Recently, we received a great essay from him with his recipe to achieve your Russian language goals. With Nathan’s permission, we are publishing it here on our blog.

By the way, Nathan is the lead vocalist of the epic death-metal band MegaDragon, which has a song about Ivan the Terrible (Иван Грозный) in their repertoire.

As someone who has been learning Russian for many years with varying degrees of success, the following are my thoughts on the effectiveness of some of the various methods I have used, and why a professional school like Liden and Denz is ultimately the best way to achieve your language goals. At present, I believe I am somewhere around the A2-B1 CEFR level, so my experience is admittedly somewhat limited. Regardless, hopefully there is some information here that is of value to you. Also, please keep in mind, the following is my opinion; if a method that didn’t work for me works for you, that is fantastic. It’s always good to try new things. Now that’s cleared up, поехали! 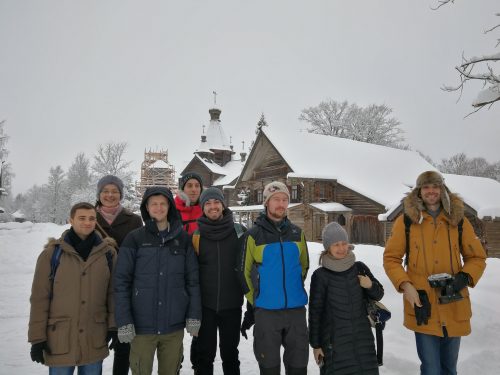 Nathan and his school mates during their trip to Novgorod

A Note for Those Who are Considering Learning Russian

Russian is hard. Period. Between the pronunciation, verb aspects, verbs of motion, the case system, and the countless other grammatical quagmires awaiting the eager, young learner, it can often feel like having to do calculus to defuse a time bomb in a grammatical avalanche. That being said, it is an immensely rewarding language to explore and one that will open doors for you wherever you may find yourself in the world. (Russian speakers are everywhere!) So once again, in order to spare you as much difficultly as possible, these are my personal Russian learning experiences over the years.

The Beginning of My Journey:

During my teenage years, I developed a deep fascination with Russia: a mysterious country that mirrors the Western culture I was familiar with, yet remains distinctly unique. Despite this interest, neither my high school nor university had a Russian language program that would work with my schedule, so I studied German and Mandarin instead. After graduating, I continued my Mandarin studies in China, but my curiosity for Russian never subsided. Thus, around the age of 25 I decided to pursue the language in earnest.

The Limited Use of Apps

In the beginning, I was primarily using apps and computer software like Rosetta Stone, Duolingo, and Anki. While these tools may have been effective in some ways (such as getting familiar with the alphabet and developing basic vocabulary), I soon discovered the progress that these programs insisted was I making did not reflect reality. In the case of Rosetta Stone and Duolingo, I had learned how to guess the correct answers on a screen, but when it came time to actually have a conversation, I had retained nothing except a few packaged phrases and vocabulary. Maybe these tools work better for different languages, but due to the grammatical complexity of Russian, progress was limited. I would say at best, these apps are better than nothing for beginners and can be decent tools for review for more advanced students.

The exception I have found to this has been Anki, which uses a Spaced Repetition System to help you review information from flash cards you design yourself or have downloaded from other users. It can be a time consuming process, but for single bits of information such as vocabulary or verb conjugations, Anki does the job. (If this method is of interest to you, I highly recommend reading “Fluent Forever” by Gabriel Wyner. “Fluent Forever” not only teaches you how to maximize this strategy, it has loads of great information about memory and language acquisition in general – I wish I would have read it far sooner!)

The Pitfalls of Speaking with Native Speakers as a Beginner

Since apps were not helping me as much as I would have hoped, my next strategy was to find native Russian speakers where I lived in China, and attempt to learn Russian from them. While this is a great way to improve your Russian if you already have a fair amount of experience with the language (perhaps an A2-B1 CEFR level), for me as a beginner, it often only served as a source of discouragement.

Despite the best intentions of the people I encountered, we did not have a strategy or structure for how we were supposed achieve our goal. Once again, due to the inflections inherent in Russian, the vocabulary that I was familiar with at that point was still unrecognizable in context. Furthermore, as there really weren’t any consequences for not studying, my motivation would waver as well. While I still learned a lot about Russia from spending time with native speakers, my language skills did not increase nearly as much as I had hoped. Something more organized was necessary.

Studying at Liden and Denz – Making the Dream Come True

Eventually, I decided the most effective way to actually make real progress was to study in Russia itself. As recommended by my former professor, I studied at the Liden and Denz Institute in Saint Petersburg for the winters of 2018 and 2019, taking intensive group classes each year for roughly five weeks each.

This was a phenomenal experience. If you want to be fluent in Russian as fast as possible, going to study the language where it is spoken is by far the best strategy. With the guidance of trained, professional teachers, well designed textbooks, and supportive learning environments, my ability to speak had finally gone beyond words and phrases, to actual sentences with semblances of real Russian! Beyond this, being in a classroom setting with fellow language enthusiasts really made me accountable and motivated. I had never been more optimistic about being able to achieve my goal of fluency. 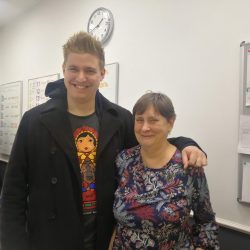 Nathan with his teacher Irina Danilova In front of the Savior on the Spilled Blood 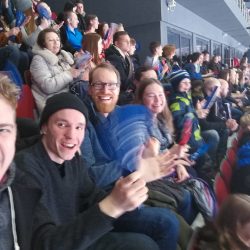 At a hockey game

Furthermore, at Liden and Denz I had made new friends, took part many excursions organized by the school, and experienced a first-hand glimpse into what life in Saint Petersburg was like. The Institute achieved a great balance between studying and exploring, and honestly provided me with some of the greatest memories of my 20’s. Not only did Liden and Denz advance my skills, but they also gave me the cultural context necessary to bring the language to life. If you have the means, this is the best way to learn.

Unfortunately, between my visits to Saint Petersburg, my Russian inevitably regressed. And once the pandemic started, going to Russia was simply no longer an option. Unwilling to continue losing my progress, I eventually began to take private online lessons. Nathan and his teacher Galina Fedyaeva.

Much to my surprise, the online lessons worked for me incredibly well. As previously mentioned, having a friendly, professional teacher and professionally organized classroom resources are the keys to success. Not only are these classes a great way for you to continue your progress, but they can be taken anywhere, at almost any time – something that is especially crucial for people who have full time jobs. Furthermore, it is more cost effective than living in the country, and with a one on one teacher, they can precisely target whatever mistakes you are making. If you are unable to study in a country where Russian is spoken, this is the next best thing. I have never felt more confident in my language skills and I highly recommend trying them.

I believe the best way I can describe one’s journey through Russian (or any language really) is akin to a rocket departing the Earth. The initial launch of the rocket requires the most fuel for it to break gravity. However, as the rocket continues to go further from the Earth, it needs less and less fuel until it finally breaks free completely. At the same time, if fuel isn’t added, the rocket falls back to the Earth. With this metaphor, imagine your brain as the rocket, the challenges of the language as the gravity, and your motivation as the fuel.

In other words, progress in learning a language is not linear, but exponential. Over time, acquiring new vocabulary becomes easier, grammar structures become more recognizable, and connections and patterns begin to emerge more rapidly, which in turn unlock more new and exciting challenges. Eventually, you will discover that you actually can read books, write journals, appreciate foreign music, and have deep conversations with all kinds of people. It’s just a matter of staying motivated, consistent, and using the right tools and methods to get there.

Hopefully, my experiences will help you achieve your goals in a lot less time than it has taken me. As someone who has spent many years learning different languages, it’s just important to remember what it’s all about: having fun, making memories, and meeting new people. Liden and Denz can truly help you with that.