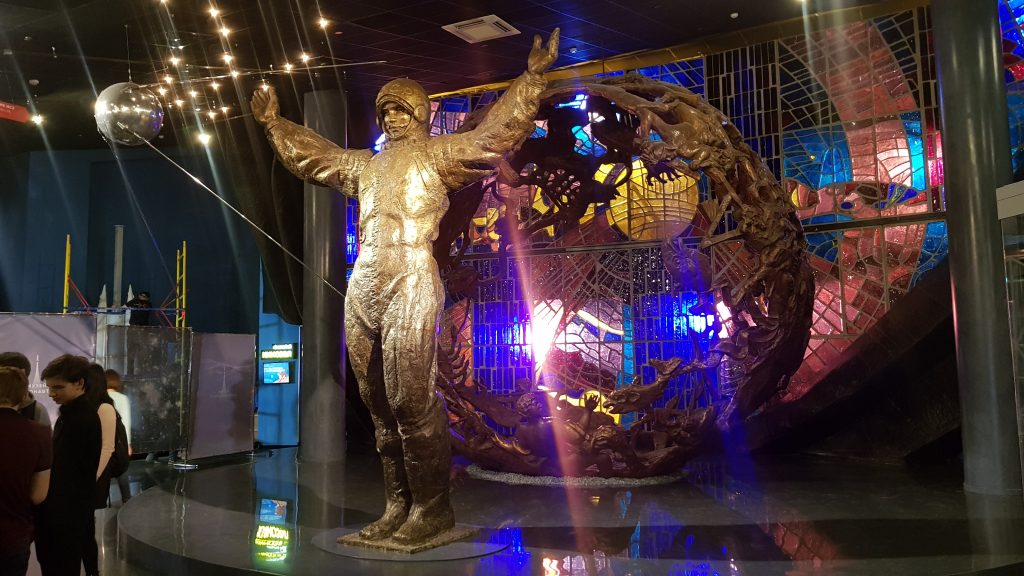 Every year on April 12, Cosmonautics Day commemorates the first manned space flight by Yuri Gagarin in 1961. This day is considered a significant date in the history and pioneering spirit of space travel. With its first manned space flight, the former Soviet Union set a decisive milestone for the future of space travel – the beginning of a new era. The United Nations General Assembly has declared 12 April to be the International Day of Manned Spaceflight.

The Russian cosmonaut Yuri Gagarin is a special person who plays a key role on this day. He went into space 58 years ago in the Soviet spaceship Vostok 1 and was the first person in the world to experience a complete orbit of the Earth. He started on 12 April 1961 at exactly 6:07 a.m. in Baikonur, Russia, and circled the Earth on board of the spaceship – at an altitude of around 300 kilometres and a speed of around 29,000 km/h.

Of course, the flight was anything but harmless, but Yuri Gagarin was prepared for his possible fate. Even when his space capsule did not separate properly from the supply unit of the spaceship when entering the Earth’s atmosphere and floated around its own axis. Fortunately, the dramatic moment was quickly over and Yuri Gagarin landed about 26 kilometres southwest of the city of Engels in the Saratov oblast – a triumph for the Soviet Union!

But this pioneer flight was not very likely for the Soviet Union at first: The Russians were technologically far behind and things had gone wrong before. The rocket launcher was initially a problem, test flights with animals ended fatally and in the Nedelin disaster half a year earlier around 100 people had died in a rocket explosion on the test site in Kazakhstan. For this reason, even the initiators of the event estimated the success rate at 50 percent. So the joy after the successful flight was all the greater.

But what was so special about Yuri Gagarin that made him the first person to be allowed to fly into space? At first glance not much: He was the son of a farmer and a relatively small family father under 1.70 m tall who was 27 years old at the time of the flight. He became ” cosmonaut no. 1 ” in particular because of his human qualities. His qualities were considered reasonable and humble and he had the right amount of realism, knowledge of life and, above all, calmness. This was especially evident on departure – with his legendary appeal “Поехали!” (Let’s go) he recorded the most exciting experience of mankind.

During the 108-minute flight Gagarin had enough time for the first view of the “blue planet”, as he called the globe, from above due to the fully automated operation of the spaceship. Then he landed in a field near the village of Smelowka in Russia and was eagerly awaited. Through the radio, the entire Soviet Union had been informed of the first space flight with a cosmonaut on board. People danced on the streets, celebrated Yuri Gagarin and were happy about the successful flight into space.

And they still do today: Every year on 12 April, parties are held on all continents of the “blue planet” to remember this eventful day. The motto is “Yuri´s Night” – to commemorate the first man in space.

In honour of this event, the cosmonaut museum in Moscow documents Soviet space travel and its technology. From the R-7 via the Sputnik to the space station “Mir” and the space shuttle “Buran” – in the museum near the exhibition area of the achievements of the national economy (VDNH), directly at the metro station bearing the same name, visitors can enter the world of space.

The museum is already impressive from the outside: the roof of the building consists of a parabolically curved and converging tower, at the top of which a rocket, inclined towards the sky and ready for launch, is located at a height of 107 metres. The museum consists of a low building on the roof with an exhibition and a monument “For the Conquerors of Space”, designed by the sculptor Faidysh-Krandijewski and the two architects Koltschin and Barschtsch. It was added to the exhibition in 1964, after space travel became increasingly popular after the success of Yuri Gagarin in 1961 as the first man in space. Both the roof and the monument are clad with titanium slabs, thus creating a silvery sheen depending on the incidence of light.

At the back visitors of the museum can see the statue of the Russian rocket pioneer Konstantin Eduardowitsch Ziolkowski, who was born in 1857 and until 1935, the year of his death, developed essential foundations of space physics, such as the basic rocket equation in 1903.

Behind this statue, the cosmonaut avenue begins with busts of Soviet space specialists and cosmonauts such as Sergei Korolyov, Yuri Gagarin or Valentina Tereshkova. By the way, the cosmonaut day is celebrated there every year.

On the opposite side, directly accessible from the metro Station VDNH, there is the entrance of the museum. From a semicircular exhibition space you can reach the central main room with further exhibits and the large cosmonaut sculpture – the central object of the exhibition. Illuminated by numerous spotlights, there is a six-metre-high sculpture of a seemingly smiling cosmonaut with wide-stretched arms. Behind him is a globe made up of various interwoven creatures.
Both the cosmonaut and the globe are cast in bronze. The wall behind the two objects is particularly impressive: It consists of coloured stained glass windows, which are strongly reminiscent of church windows and illuminated from behind.

But the museum is not only architecturally beautiful. Exhibits are also impressive and give visitors the feeling of getting a little closer to outer space. Besides specimens of the Sputnik satellites, you can see training equipment to prepare the cosmonauts, space suits and even parts of the Soyuz rockets 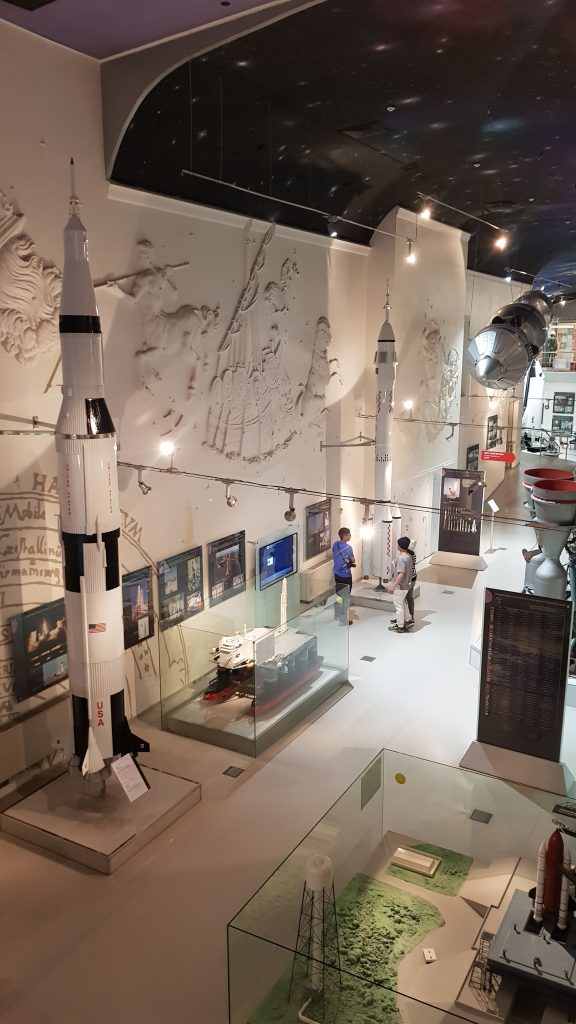 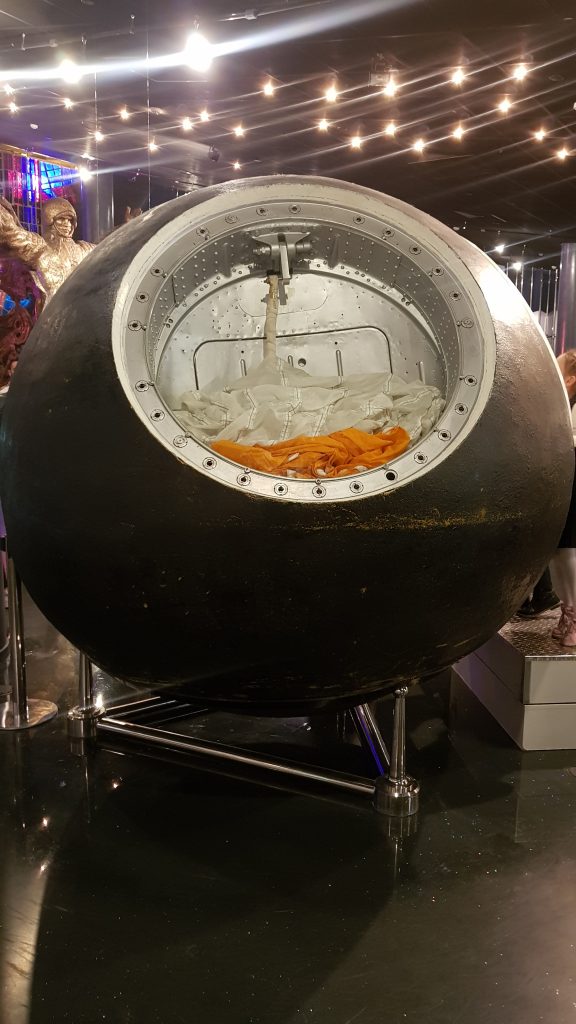 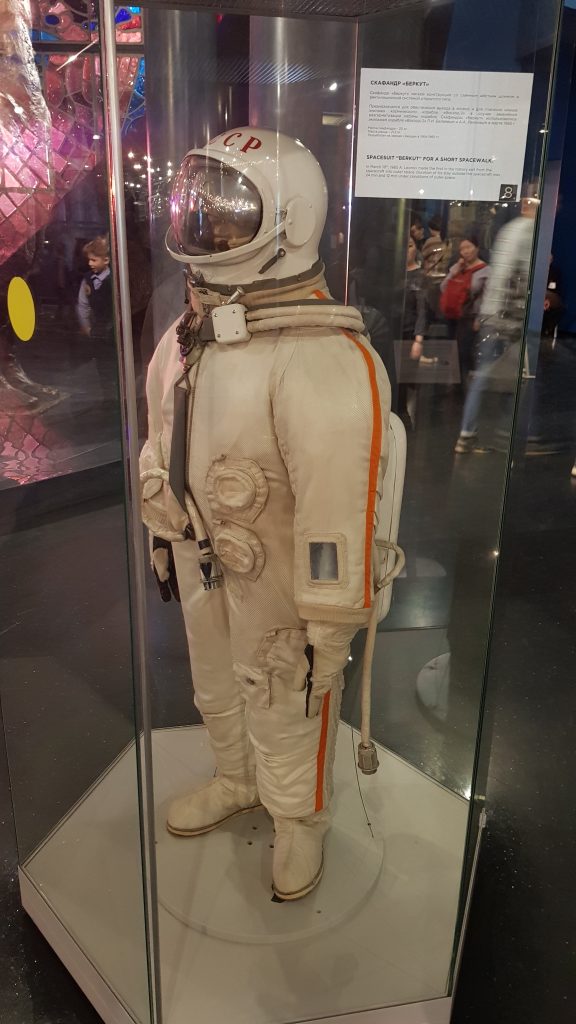 Although the museum was planned from the beginning, it was not completed and inaugurated until April 10, 1981, two days before the 20th anniversary of the first manned space flight. It should express beside further information to the technology and the history of the space travel, also its meaning for the Russian culture. Even after the collapse of the Soviet Union in December 1991, the cosmonaut museum remained intact throughout the entire period and presented the material from 1959 to 1991 until 2006, and from 2009 on, today’s extensive exhibition. 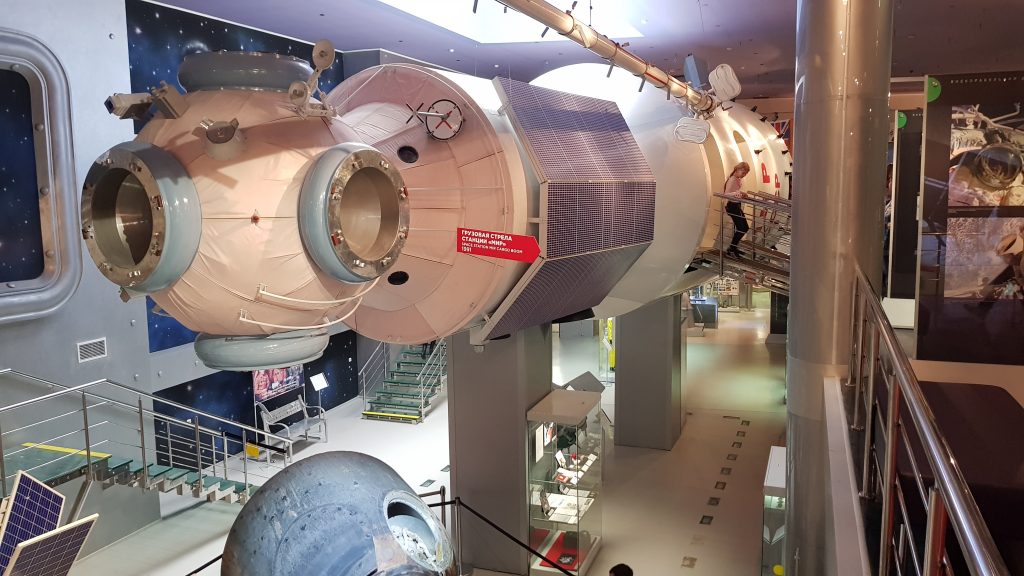 The museum is worth a visit every day, but on 12 April each year, the first manned space flight on the entire VDNH grounds is particularly honoured.

Because a special festival with several events takes place there on this special day. The celebration begins in Korolyov, in the Moscow oblast, with an honorary ceremony for space exploration. The ceremony continues on Red Square to visit the grave of Yuri Gagarin, which is located in the necropolis of the Kremlin Wall. Then it continues to the cosmonaut avenue described above, where the busts of the people who played a leading role in Soviet space travel are exhibited. The main events of this festival will take place on the exhibition grounds of the VDNH.

That sounds to me like an event worth seeing and a special plan for April 12, 2019. Will I meet you there? Or how do you celebrate “Yuri’s Night” this year?

Hello friends, my name is Regina and I am from Germany. Fortunately, as an intern at Liden & Denz, I am able to blog some exciting and interesting facts about Russia or recommendable places in Moscow for you. I am looking forward to an exciting time!