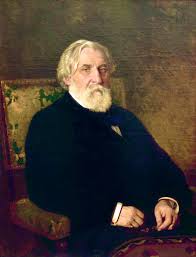 On November 9th of 1818 in the city of Oryol (Орёл) located in the center of the country, the Russian writer Ivan Sergeyevich Turgenev was borned, he might not sound very famous to most of you but he is recognized by his novels, poems and theater plays characterized for elegant execution, lucidity and liberal ideology.

His plays are about the suffering of the working social class, also considered as peasantry, and the unfair treatments to it that he could observe in his childhood. This kind of violence and abuses were due to the Russian social system at that time which became a consistently topic in his plays.

After publishing his first poem <<Parasha>> in 1843, among his distinguished major works are included <<Sportsman’s Sketches, Rudin, Home of the gentry, On the Eve and Fathers and Sons>> that remark and describe the difficulties of the Russian life in the villages. Nevertheless, he also described how the Russian intelligence was planning some changes into a new age.

He also participated in the ideological confrontation between occidentals and slavophiles. The first group wanted to convince the Russians to get incorporated in occidental Europe to get a better life quality; meanwhile the other wanted to keep the country safe from any extern influence with the most rooted extremely orthodox Russian traditions.

Turgenev belonged to the first one, because he spent most of his life abroad; however he always thought that changes are to be done always but without any revolution. This is something that he made clear in his play <<Fathers and Sons>> with the character of Evgeny Bazarov, a young revolutionary student with a humble origin who fights again the political system, fights for freedom and justice but he is destined to a tragic life; with this work, Turgenev became author of the philosophic nihilism.

The meaning of this last word is the rejection of moral and religious principles, that nothing is meaningful in life; in those years in Russia, they didn’t want to accept the social order in their lives.