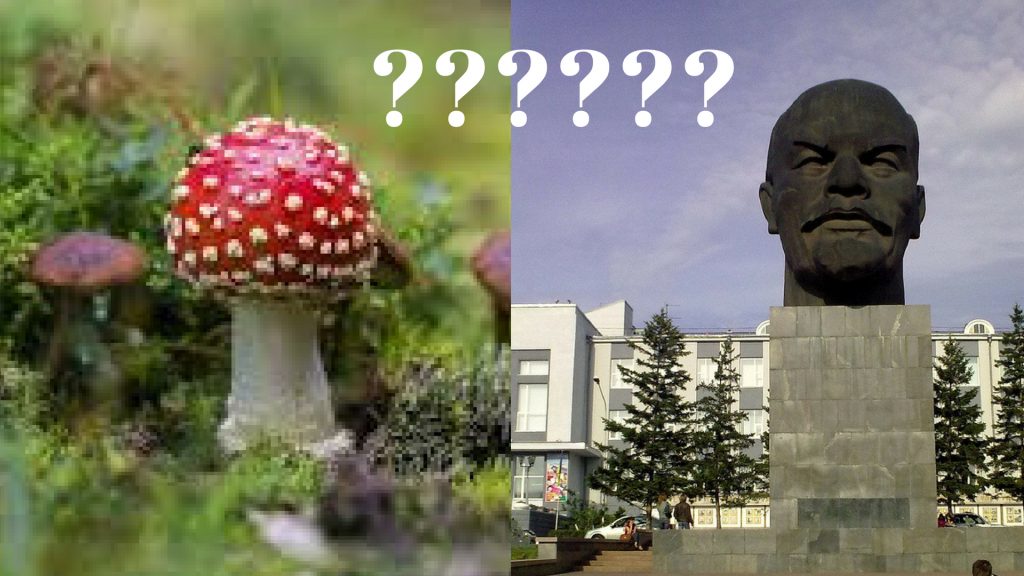 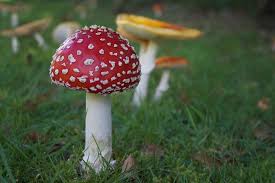 Он был не только грибом, он был еще помимо всего радиоволной. He was not only a mushroom, but he was, furthermore, also a radio wave.

When Sergey Kuryokhin, an avant-garde musician posing as a scientist, uttered the above words in an interview with reporter Sergei Sholokhov on live TV on May 17, 1991, some viewers believed him. 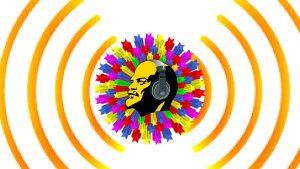 Relying on false scientific ‘research,’ logical fallacies, scientific jargon, and appeals to authority, Kuryokhin argued that psychedelic mushrooms are neither plant nor animal, but radio waves with distinct, singular personalities. Furthermore, when consumed by a human regularly over time, the personality of the mushroom slowly replaces the personality of the individual. The person becomes a mushroom, physically and psychologically. According to Kuryokhin, this is exactly what happened to Vladimir Ilyich Lenin, who through the constant usage of “death cap” mushrooms slowly became a mushroom himself.

Here’s a short, subtitled clip from the original broadcast.

In an interview with Komsomolskaya Pravda, Kuryokhin explains.

Here’s how the idea was born: Sergei Sholokhov [the reporter in the hoax] was watching a TV program about the death of poet Sergei Yesenin. Using totally absurd evidence, the creators of the show fabricated proof that the poet was actually killed. Showing a photo from Yesenin’s funeral, the hosts explained, ‘Look where this person is looking. And this other person is looking another way. Therefore, Yesenin was killed.’ Sergei finished watching this program and told me, ‘You can prove anything this way.’

RuWiki offers various theories about why the artists chose the mushroom hoax in particular. I like the following theory, offered by musician Sergey Zharikov:

[according to a theory of Kurt Godel]…the leader of the people should be of a slightly different nature and should be a step higher on the biological ladder. So, according to Godel, Lenin is a typical mushroom….Kuryokhin really liked this idea.

Exactly. And at the end of the stunt, the jokesters couldn’t even keep themselves from cracking up on air. But, this occurred in the context of Gorbachev’s glasnost-era, when many important, shocking, and true historical revelations about Soviet history were uncovered and dispersed as censorship was lifted. For the first time, for instance, Soviet citizens could legally publish and read Bulgakov, access information about Stalin-era repressions, and listen to foreign radio stations. Moreover, TV shows on “The Fifth Wheel,” where the stunt was broadcast, were typically serious and scientific. A Russian audience simply couldn’t comprehend the fact that absurdist humor would be shown on TV. So, the theory actually made sense to people, since the idea of truth had been so destabilized and perverted in the Soviet past.

While it’s impossible to determine exactly how many people believed the theory and to what extent they believed it, anecdotal evidence testifies that, indeed, there were those who at least accepted the theory as plausible.

Sholokhov, in a December 2008 interview with the journal “Krestyanka,” recalls:

The day after our broadcast, a delegation of old Bolsheviks approached Galina Barinova, who oversaw a regional committee of the party, and demanded to know, ‘Could it be true that Lenin was a mushroom.’ ‘NO!’ answered Galina Barinova. “But…” the Bolsheviks insisted, “they said so on TV yesterday.” “It’s not true,” she responded, and then uttered a phrase that sent me and Kuryokhin into hysterics. “Because a mammal cannot possibly be a plant.” So, in response, I issued a rebuttal to Galina Barinova’s assertion in the newspaper “Smena.” We did, after all, go to such great lengths to prove that mushrooms are, in fact, a separate kingdom — neither plant nor animal.