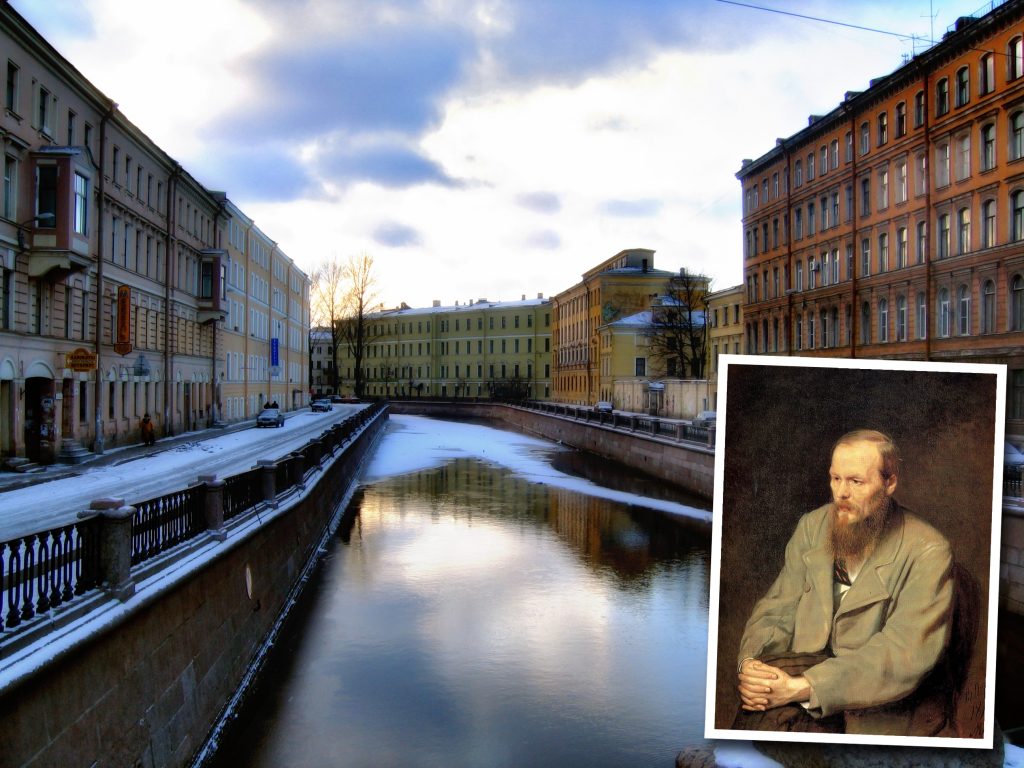 If you love Russian literature, St. Petersburg is a dream destination. Pushkin, Dostoyevsky, Tolstoy, Gogol, Nabokov… Almost all the great Russian writers spent time in this beautiful city. Wandering along the canals beneath the grand buildings, it’s hard not to feel inspired as well. So what can you do to find out more about St. Petersburg’s artistic heritage (besides picking up a book, of course)? Luckily, in this city you’re spoiled for choice. Without further ado, here’s our literature lover’s guide to St. Petersburg.

Nose Around the Apartment Museums

It sometimes seems like you can’t turn a corner in St. Petersburg without finding yourself on the street where some seminary figure used to live. Many of these former residences have now been transformed into apartment museums: part-shrine to the iconic occupant, part-memorial to a bygone era.

There’s the Pushkin Apartment Museum (Naberezhnaya Reki Moyki 12), where the poet wrote his masterpieces and died following a duel in 1837. The Aleksander Blok Museum (Ulitsa Dekabristov 57), which was occupied by the poet from 1912 to his death in 1921. The Dostoyevsky Museum (Kuznechnyy Pereulok 5/2), which opened a full 90 years after the writer penned The Brothers Kazamarov within its walls. And the Nabokov House Museum (Bol’shaya Morskaya Ulitsa 47), where one of Russia’s most famous exiles and future author of Lolita was born (the apartment now houses his manuscripts and butterfly collection).

Follow in the Footsteps of Your Favourite Fictional Characters

In light of the fact that so many Russian writers lived and worked in St. Petersburg, it’s hardly surprising that the city serves as the setting in so many of their poems and novels. Even though a lot of time has passed since then, it’s still relatively easy to follow in these fictional characters’ footsteps.

You can take a literary walking tour (which we sometimes run – so check out our tours and activities page to see what’s coming up). You can pay a visit to the so-called “Dostoyevsky Zone”, a collection of streets and buildings close to Sennaya Square where a lot of the action in his novels took place (many scenes in The Idiot and Crime and Punishment unfold on the Catherine Canal, and Crime and Punishment’s protagonist Rodion Raskolnikov “lived” at Grazhanskaya Ulitsa 19/5). And while you’re in the area, keep an eye out for an unusual moment commemorating Gogol’s story The Nose (Prospekt Voznesensky 36)…

Get a Taste of Russian Literature

If all this sightseeing makes you hungry, fear not – there are plenty of St. Petersburg eating establishments with an impressive literary heritage. One, Café Brodyachaya Sobaka (Stray Dog), can be found just down the road from our language centre (Ital’yanskaya Ulitsa 4). Now a café and live music venue, the Stray Dog was once the artistic salon at the heart of St. Petersburg’s cultural life during the Silver Age of Russian Poetry, during which time it would host performances, poetry and music nights and attract regulars such as Alexei Tolstoy, Anna Akhmatova, Vladimir Mayakovsky and more.

Another great choice is Literaturnoye Cafe (Nevsky Prospekt 18), a literary café that’s been serving literary luminaries with Russian and European cuisine since 1816 (apparently it was a favourite of Pushkin’s).  Or you might like to try The Idiot (Naberezhnaya Reki Moyki 82), a restaurant named after the Dostoyevsky novel, whose antique furnishings and classic Russian fare evoke the novel’s setting perfectly. Oh, and you get a complimentary vodka shot before your meal, too.

So there you have it: a literature lover’s guide to St. Petersburg. Of course, this post only scratches the surface of what the city has to offer – there are plenty more literary museums, memorials and events that we haven’t mentioned here. If you’ve visited any of the places mentioned above or would like to recommend somewhere else, please leave a comment below. And don’t forget to follow us on Facebook and Instagram for more tips on making the most of your time in Russia!

This post was brought to you by Leah, currently studying Russian at Liden and Denz, St. Petersburg.

Leah is studying Russian at Liden & Denz Language Centre in St. Petersburg, while interning as a Blogger/Editorial Assistant.