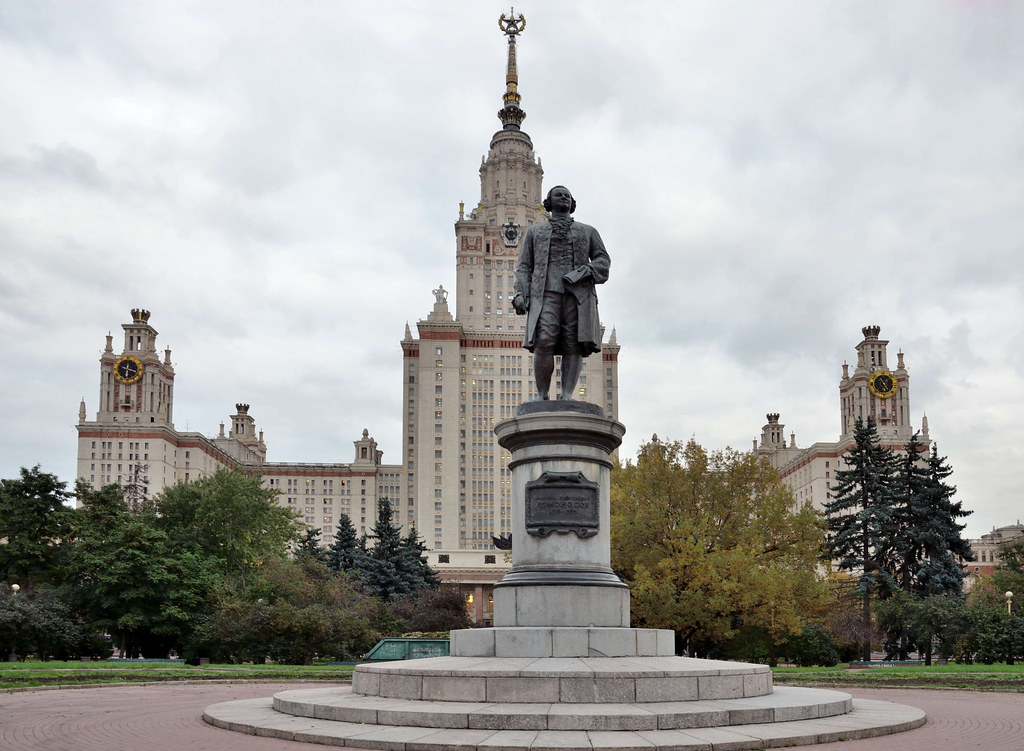 On 19th November 1711 Mikhail Vasilievich Lomonosov was born in a small village in the far north of Russia. His life was relatively short, but his love for learning took him far and earned him his reputation as the founding father of Russian science. Read on for a short summary of his life journey and surprising facts about the man himself!

Lomonosov’s father was a peasant, although he ran a successful fishing business, which he hoped his son would take over. But, Lomonosov loved learning, and, since his neighbour taught him to read in his childhood, he spent his time reading all the books available to him.

Disappointed by the lack of variety in the reading material at home (the only books were religious texts) and itching to study at a university, Lomonosov decided it was time to move to Moscow. In 1730, he completed the 1170km-long journey in 22-37 days -a large part of it on foot!

On arrival in Moscow, Lomonosov managed to get into the Slavic Greek Latin Academy by saying his father was a nobleman. This was, obviously, a lie, and although he was now getting the education he so wanted, he had almost no money to live on and ate only kvas and black bread.

Despite nearly being expelled when his lie came to light in 1734, Lomonosov thrived in his studies. He picked up several languages, and completed the 12-year study programme in just five years!

A close shave and a happy ending

From Moscow he travelled from place to place to further his education, first to Kyiv, then to St Petersburg, then to Marburg and Freiburg in Germany (he was awarded a grant to study there along with a couple of other Russian students). Although he learnt a lot of new things in Germany, he wasn’t always on his best behaviour and was once put in the university prison after a drunken brawl; however, luckily for him, his mentor paid for him to be released.

In Marburg, Lomonosov fell in love with his landlady’s daughter and they married in 1740 and started a family. His grant from the Academy of Sciences (recently opened by Peter the Great) was not enough for him to support the family in Germany, and so they decided to return to St Petersburg in 1741.

Lomonosov began researching and teaching at the Academy of Sciences, and founded Moscow State University in 1755. During this period he worked tirelessly to promote science and the teaching of science in Russia, insisting that the professors at the academy lectured in Russian regularly, and increasing the amount of scientific journals in Russian (both were usually in Latin or German). Apart from that, his ability to write odes and make mosaics, which he dedicated to the various tsars he lived under, won him favour in the court and attracted funding to the scientific institutions.

Known as the father of Russian science, Lomonosov made a lot of discoveries which were advanced for his time. He discovered that mass is always conserved in chemical reactions, devised his own telescope and discovered the atmosphere of Venus, explained how icebergs are formed and basically predicted the existence of Antarctica (he said that icebergs in the South Ocean could only be formed on an ice-covered dry land mass). He was also one of the first to understand the principle of aerodynamic lift, constructing a helicopter which was able to fly (albeit only just, with a force of 0.1N).

Lomonosov did, however, refuse to accept the principle of gravity, since he was convinced that two bodies can only exert a force on each other through physical contact. Oh well, nobody’s perfect…

Jack of all trades, master of all

Lomonosov was a polymath, and his areas of expertise included physics, chemistry, geology, astronomy, literature, poetry, and even mosaics (he set up his own factory, which remains Russia’s key manufacturer of porcelain to this day). Also of particular relevance to this blog: he compiled the first Russian grammar textbook!

Lomonosov was in the middle of writing a history of Russia before he died in 1765. Undoubtedly he had plenty more projects which he would have liked to complete!

This article was written by Olivia, a current student at Liden & Denz Moscow