Russian in Latvia – how is it different? 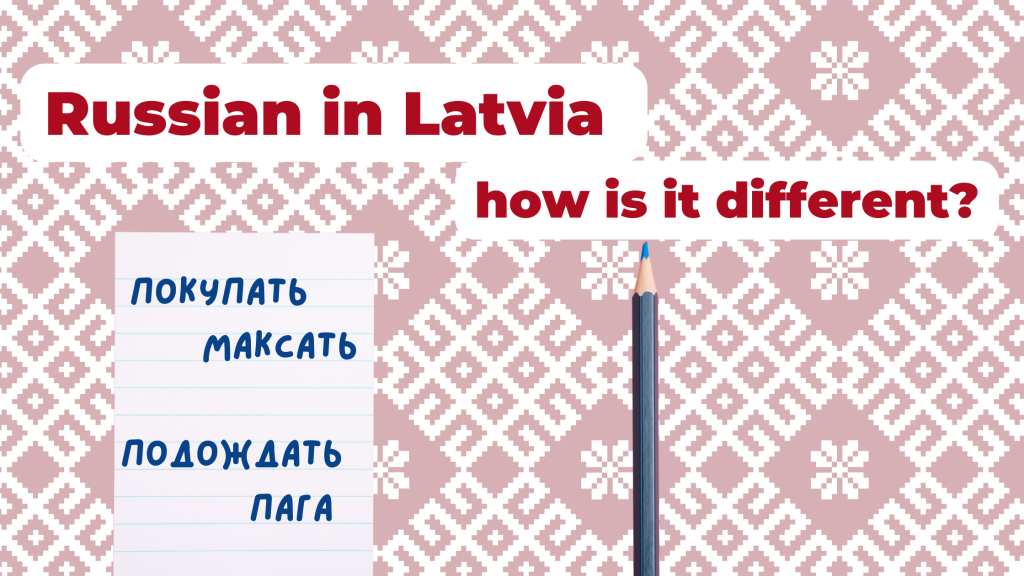 One of the many things you will get to experience in Latvia is witnessing the consequences of language contact. This time, we are going to check out how is Latvian Russian different from Standard one!

Russian has been spoken on the territory of today´s Latvia for centuries. With Russian-speaking people being the largest minority, you can hear it almost everywhere on the streets of Riga. However, the official language of Latvia today is only Latvian, which means that public announcements and similar things are exclusively in Latvian. But you don´t need to worry about that when coming to Riga – almost everyone would be more than happy to answer you in Russian once you kindly say – можно по-русский? There is even a Russian theatre in Riga – you can read more about it in my previous post here. Russian is so present in the everyday life of Riga people that the cinema provides both Latvian and Russian subtitles at the same time! But with the languages being in constant contact for a long period of time, there are some differences between Russian in Latvia and Standard Russian!

One of the worst nightmares of any Russian language student are decimal numerals. I am sure you´ve had your share of pain when trying to pronounce all those difficult parts of any decimal numeral – and then declining them on top of all that! Luckily, if you decide to learn Russian in Latvia, this is one thing that becomes easier. Namely, Russian in Latvia doesn´t complicate as much with decimals.

*in colloquial Russian, it is common to say just шестьдесят пять и семь, but you won´t hear the Latvian version

It is very common for any language to have so-called filler words – short, meaningless words (or sounds) we use to fill the little pauses that occur while we decide what we’re going to say next. Well, the likes and umms of Russian in Latvia are far rarer than the Russian spoken in Russia. Fillers like типа and короче are almost never heard in Russian in Latvia, while they are very common elsewhere. Still, there are a lot of other fillers used in Latvia that are considered a bit more sophisticated –  допустим, так, вот.

The inevitable thing when there are two languages spoken on the same territory is the phenomenon of loan words. If you happen to talk to a Russian speaker in Latvia, don´t be confused if they use the verb максать instead of платить.  It comes from a Latvian verb maksāt with the same meaning. You might also hear someone saying paga to you – it´s from Latvian pagaidi which substitutes for the Russian подожди. For more Russian slang in Latvia – read this!

So now that we went through the basics, you are ready to go! Whether you decide to talk with the locals or stick to the language course, I am pretty sure you will have a lot of fun learning Russian in Riga. It´s definitely an experience worth having!