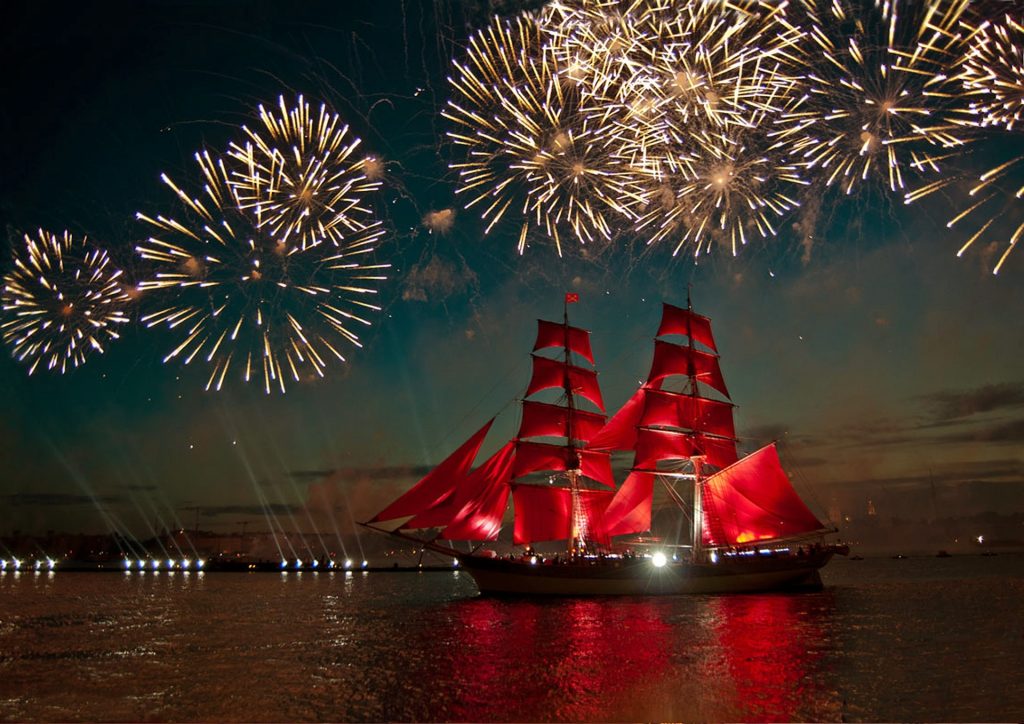 The Scarlet Sails – or Алые Паруса (Alye Parusa) – is one of the main public events of the Russian Summer, and for any visitors who are lucky enough to be staying in St.Petersburg this year on the night of the 23rd June – when the famous White Nights are at their brightest – there is no question that this event should be firmly fixed in your calendar.

Taking place every summer, the Scarlet Sails is dedicated to the graduation of all high school students in St. Petersburg, marking the end of the academic year. This event is not only celebrated by students, of course – an increasingly large number of attendees, totalling in the millions, come from both within and beyond the city limits to experience wonderful and varied musical performances, grandiose fireworks displays, and a spectacular water show.

The Scarlet Sails is not merely spectacle and an excuse to celebrate, however. As it turns out, its meaning is far more symbolic. The tradition began following the end of the Second World War, when a number of schools in St. Petersburg (then Leningrad) began jointly celebrating the graduation of their students each year. The name Scarlet Sails is taken from a popular novella by the same name, written by Alexander Grin in 1923. In the story, a young village girl, already shunned by her neighbours, is given a prophecy by an old storyteller which speaks of a ship with Scarlet Sails that will come for her. In dreaming of the ship’s arrival she is cut off further by those around her who view her as little more than a fool. Yet in the end, her dream is realised. It is a highly affecting tale, and one which conveys beautifully the enduring power and importance of hope in life. In a similar vein, the Scarlet Sails festival reflects the dreams of the younger generations and the hopes that, in fulfilment of their dreams, they will herald a better and brighter future for all.

Since the immediate post-war period the celebration has become a major event, taking place every year on the Palace Square and the Neva waters adjacent to the Winter Palace. There are two key parts of the festival. Firstly, there is a concert comprising various musical and theatrical performances from the city’s orchestras and ballet groups, as well as contemporary artists. Secondly, there is the passage of the frigate Штандарт (Shtandard) – the first ship of Russia’s baltic fleet – along the Neva, bearing the same Scarlet Sails as those of the ship in the original tale. This is accompanied, in turn, by a massive light-show and fireworks display.

The concert begins at 22:00 at the Palace Square, however attendance is by invite only, with invitations being handed primarily to graduating students. The light-show begins at 00:40 along the Neva. With regards the latter, the event is public, however be warned that it is very busy along Nevsky and on the bridges. However, it is possible to get a good view from the other islands as well. The map below is a useful guide for where to go if you are unsure: 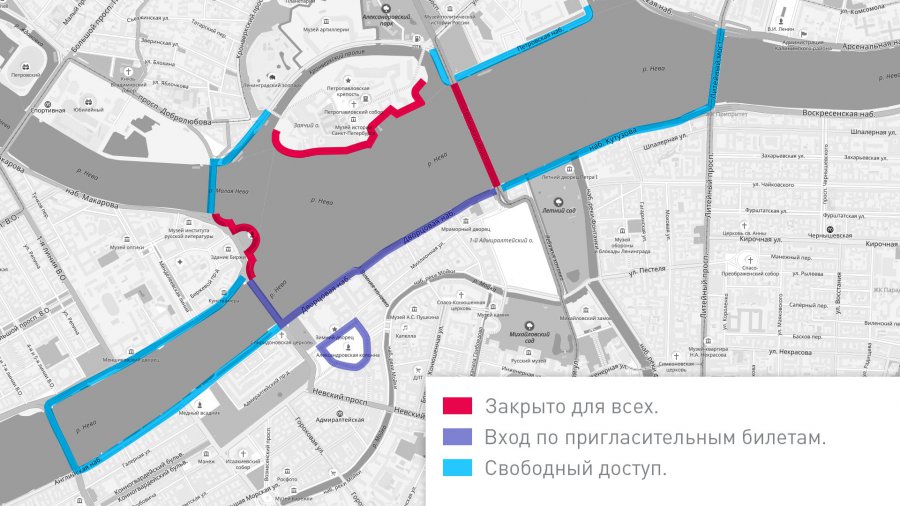 Свободный доступ = Area open to all

As a final note, for any readers interested in looking into the original text to better understand the symbolism held by this fantastic event, I have linked both the English and original Russian versions below: