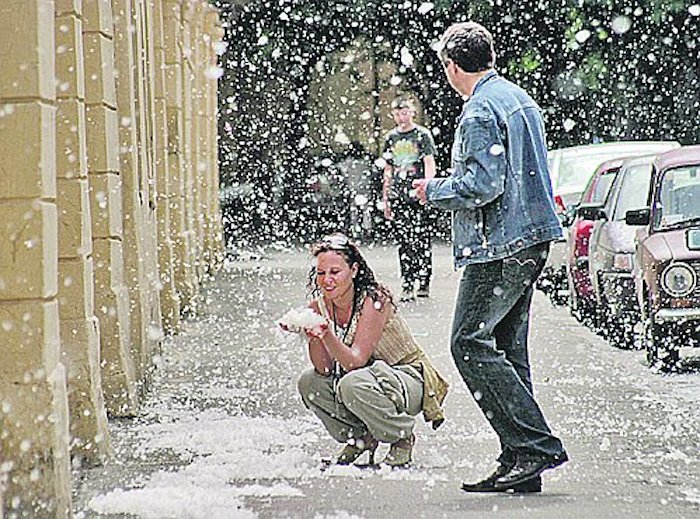 For most of people, spring and summer are the best seasons of the year: the birds are singing, the trees are in bloom, the sun is shining! Finally after winter and snow, the Moscuvites can go out and enjoy the warm and sunny weather. And yet, at this time of year, some people already regret the winter cold and the rain! Indeed, it is the beginning of a nightmare for people allergic to pollen: the city is assaulted by a blizzard of cottony tufts of seed released by the tens of Thousands of poplars That adorn Moscow (around 400,000).

It completely pervades the whole city, intrudes everywhere: apartments, cars, air conditionner and even in your mouth if you’re not careful.

If you are not allergic, it is a magnificent sight to behold: it is like snowing in summer! Obviously, for those who are allergic, it’s time to refuel handkerchiefs, drugs and say hello to the red eyes!

So why so much poplars fluff? At the time of the Soviet period, the people involved in landscaping choose to decorate the city with balsam poplars as quick way to add some green to the city. The choice of this kind of tree was quite logical: aromatic tree that grows very quickly and it seems to “soak up a wide amount of carbon dioxide compared with the other trees” (well, go and tell what to those who cannot breath normally because of them).

But while they were planting trees, they made a mistake: they planted more females than male specimens! And it is because of the females that there is pukh everything down! Yes, there is too much fluff, because there are not enough males to fertilize … And it lasts for more than 80 years! The first trees have been planted in the 30s! In recent years, the city of Moscow has decided to replace the trees by males, but only the dying trees.

This may seem like a fun situation, some people are saying that Moscow is cursed some other  talk about the pukh as one of the most “resistant” inheritance of Stalin! For those who can handle the invasion: a blizzard of pukh at sunset can be extraordinary beautiful sight. For the others, well, just pray that It would be raining at the peak of pukh!