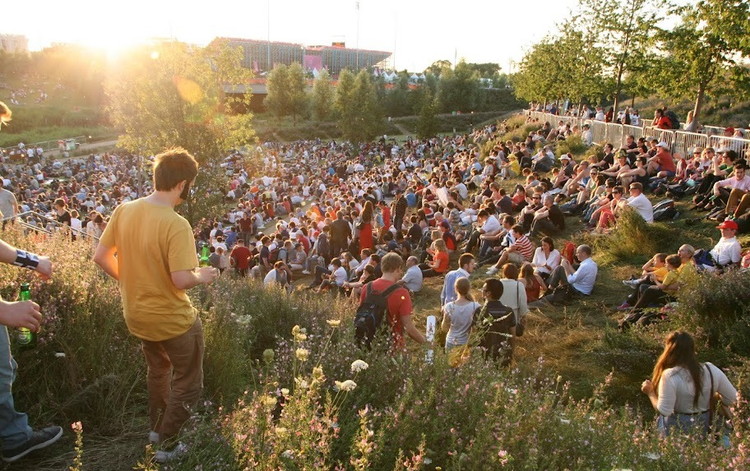 We are all waiting for the rain to stop and the summer to show up once for all, but don’t torment yourself we’ll soon be able to fully enjoy the surprises that the capital has in store for us. In fact, this summer Moscow is hosting many music and open-air festivals to entertain both its citizens and its tourists. These festivals are packed with well-known and loved artists, so you should better join the thousands attending for an unforgettable weekend.

Here you have some suggestions:

The sixth Ahmad Tea Music Festival will be taking place in the park area of the Tretyakov gallery in the best traditions of British open airs. The festival has the aim to create a qualitative cultural environment and the organizers want to provide relevant content for lovers of modern British music in Russia and to transmit the tradition of British music festivals in a Russian cultural space, contributing to strengthen the Russian-British cultural exchange and to foster the values of creativity. The festival will be headlined by the UK indie rocker PJ Harvey, who is returning to action after a long break to present her new album. She will be joined by two other British bands – The Maccabees and Django Django – who will also present new material.

Sensation has been described as the world’s leading dance event and this year it will be the ninth held in Russia. It will be presented in the format of a theatrical performance titled “Welcome to the Pleasure dom.” Viewers will see a giant carousel-like stage, Moulin Rouge characters and visuals, a burlesque show and an old-fashioned circus atmosphere. The world’s best DJs, dancers, acrobats, stunning special effects and a mandatory “white dress code” will turn the arena into a real amusement park. The world’s best DJs will gather to be part of this magical show, where crowds will be stunned with special effects, extravagant costumes and of course, music to get your heart beating. The festival began in Amsterdam 15 years ago and has now become one of the most prominent of its kind. The line-up this year includes Djs as Mr White, Lost Frequencies, Nervo, Steve Angello & Mako, Martin Garrix, Yves V & Promise Land.

The Maxidrom rock festival returns after a three-year break and it’s back to celebrate the 25th anniversary of Radio Maximum. For more than 10 years musicians and bands such as Linkin Park, The Prodigy, The Cardigans, Placebo, Lenny Kravitz and others have performed on the stage of the so-called “Russian Woodstock.” Maxidron has therefore gained the status of an international festival, more than just hours of world-class music, there will be social and sports facilities as well as food courts. The line-up includes Rammstein and legendary Russian group Agatha Christie. Twenty-one years ago, Maxidron first took place and it was the most successful musical event of the year- this year’s festival hopes to repeat the same success.

July 2 – July 4
The concept of Outline dates back to 2009, when the first ‘outdoor’ event by Arma17 took place in a post-industrial area in the center of Moscow, merging several club stages with an art exhibition. The festival made an international name for itself in 2014 with an outstanding two-day event at the man-made island on the Moskva river. Picture a 118-year-old disused factory in Moscow, a post-industrial playground made of steel and brick that was once used to manufacture escalators for the city’s metro system. Sounds like a cool spot for a festival, right? That’s where this year’s edition of Outline is happening. And judging by the festival’s previous form, this new location is reason enough to visit Outline. The site will be transformed into a creative domain by contemporary international artists and art-crews. So far only a few acts have been announced (Magda, Veronica Vasicka, The Residents), but when the crew behind Moscow’s nightclub Arma17 are handling things, you can be sure there will be a quality mix of house, techno, electro and more.

The first Park Live festival took place in 2013 in one of Moscow’s most popular recreational sites – the architectural ensemble VDNKh. After a while, the area became too crowded, and since 2015 the Otkrytiye Arena has hosted the fest, which has previously featured headliners such as the Muse, The Killers, Paramore, Limp Bizkit and others. This year the audience will be excited to see the Red Hot Chili Peppers, Lana Del Ray, John Newman, The Kills and other fantastic artists.

An airfield on the banks of the Volga River, Nizhny Novgorod (260 miles east of Moscow).

Last year, more than 40,000 people attended the Alfa Future People of Electronic Music and Technology Festival. This year the fans can expect 100 of the world’s best DJs, the biggest stage in Russia and a unique light show. The list of participating musicians includes Greek-Belgian electronic DJ duo Dimitri Vegas & Like Mike and trance legend Armin Van Buuren. In addition to this powerful line-up, the festival offers a high-tech exhibition, outdoor yoga classes, camping areas and more than 30 restaurants.

The Afisha Picnic festival is a one-day outdoor music event that showcases a mix of professional international performances and local independent musicians. Starting in 2004 the event has included various genres of music, such as indie rock, alternative rock, experimental music, etc, and has included other sorts of entertainment such as a designers’ market, games, crafts, sports, lectures, and more. An attendance of about 50,000 is annually expected in late July, and it is spread out over the festivals’ multi-stage grounds. For a summery, family friendly alternative to usual music festivals, Afisha Picnic is the perfect choice. It takes place at Kolomenskoe Park on the estate of a former Tsar. The no-alcohol policy ensures the vibe of the festival is ideal for families. Headliners this year include the Chemical Brothers and Leningrad and with multiple stages to choose from, there is something for everyone.

Make the most of your summer in Moscow! 🙂