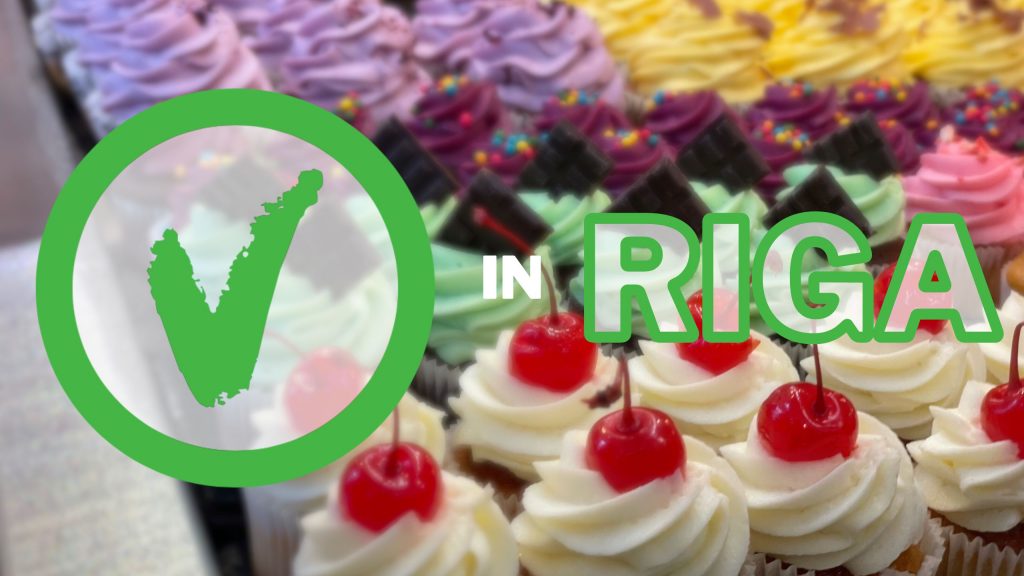 It can be quite frustrating traveling as a vegetarian. Almost every country has a fair share of meat in their traditional dishes. As a German I know what I’m talking about, and I knew Latvian kitchen isn’t really known for lending itself to vegetarian and vegan diets. So before coming to Riga I already braced myself for missing out on the local cuisine and standing in the kitchen lot. But how did it actually go? I am in my last week in Riga meaning I had plenty of time finding out how veggie-friendly this place truly is. So let me share with you how to get along as a vegetarian/vegan in Riga.

Latvia’s cuisine has many similarities to the cuisine of other northern countries. It includes plenty of potatoes, pickled vegetables, seafood and… meat of course. You can’t really deny it, there’s meat in most traditional Latvian dishes. They are usually of simple nature, combining only a handful of ingredients and spices. This makes leaving out the meat or substituting it quite difficult. Kartupeļu pankūkas (potato pancakes), Sklandrausis, and Aukstā zupa are three options that you can certainly enjoy meat free, however they are not really vegan. But don’t lose hope. The website vegan.lv has a number of vegan recipes covering some traditional Latvian dishes which might be worth trying out for you.
Latvians also make a lot of good bread. I’d highly recommend trying one of their many variations of dark rye bread. It is not only very common for Latvia but also in most cases vegan. Vegetarians also have the delight of trying out the plentiful Latvian dairy products. They are of high quality and include some good cheese (although it is a little bit hit or miss) as well as “biezpiens”. That is a kind of curd cheese, in Russia known as “творог” (Tworog), which is very popular in eastern Europe.

As a German I’m very spoiled when it comes to supermarkets. Since being vegetarian or vegan is not that uncommon in Germany there is a great choice of products for these types of diets. So when I went to a “Rimi”, a Baltic supermarket chain, for the first time I was quite surprised to see designated veggie-shelves. Their selection in general is smaller, however they still have a decent selection of vegetarian and vegan options, including your standard milk alternatives, vegan puddings and yoghurt, plant based meat and cheese, bread toppings and spreads. I even managed to find vegan mayonnaise and pizza. Unfortunately I wouldn’t call the prices cheap. As a reference: one litre of soy milk will cost you around three euros. What I was really happy to see though was plenty of labelling. Not only the products themselves have labels, but there is also a green “V”-label on the price tags. 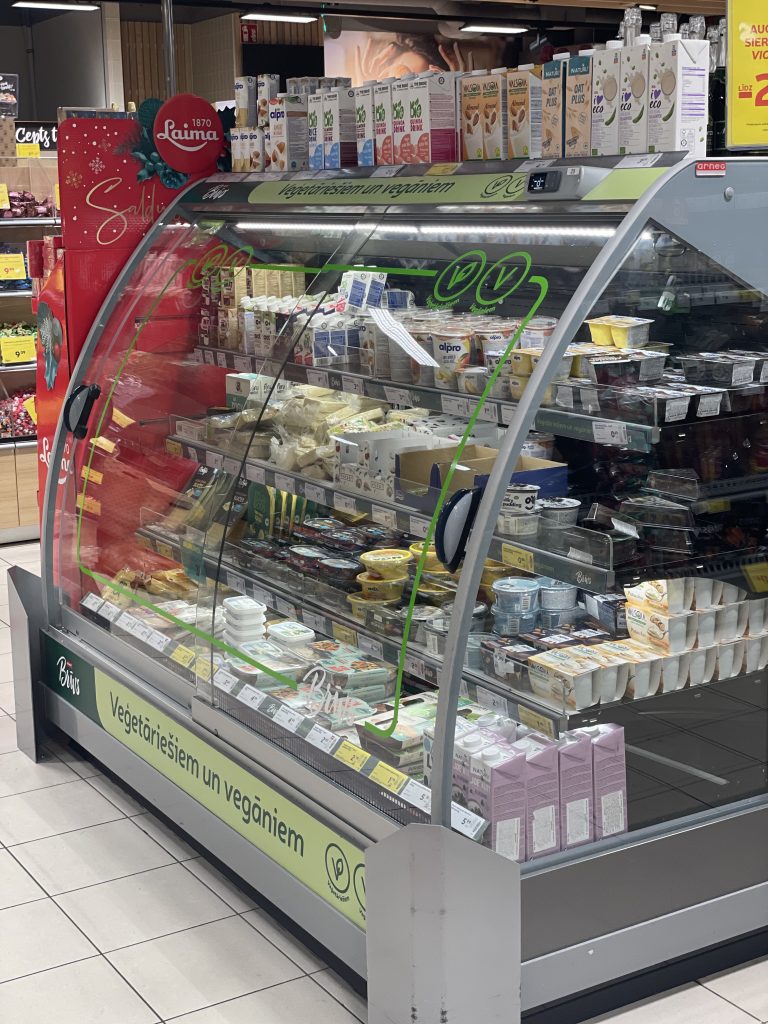 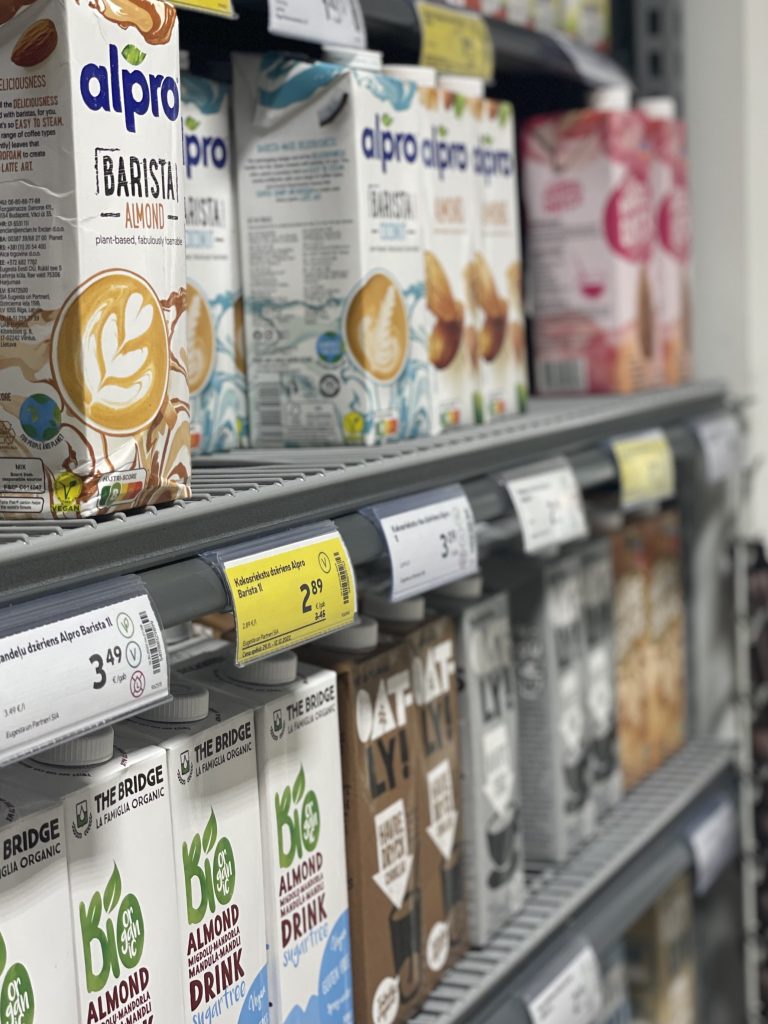 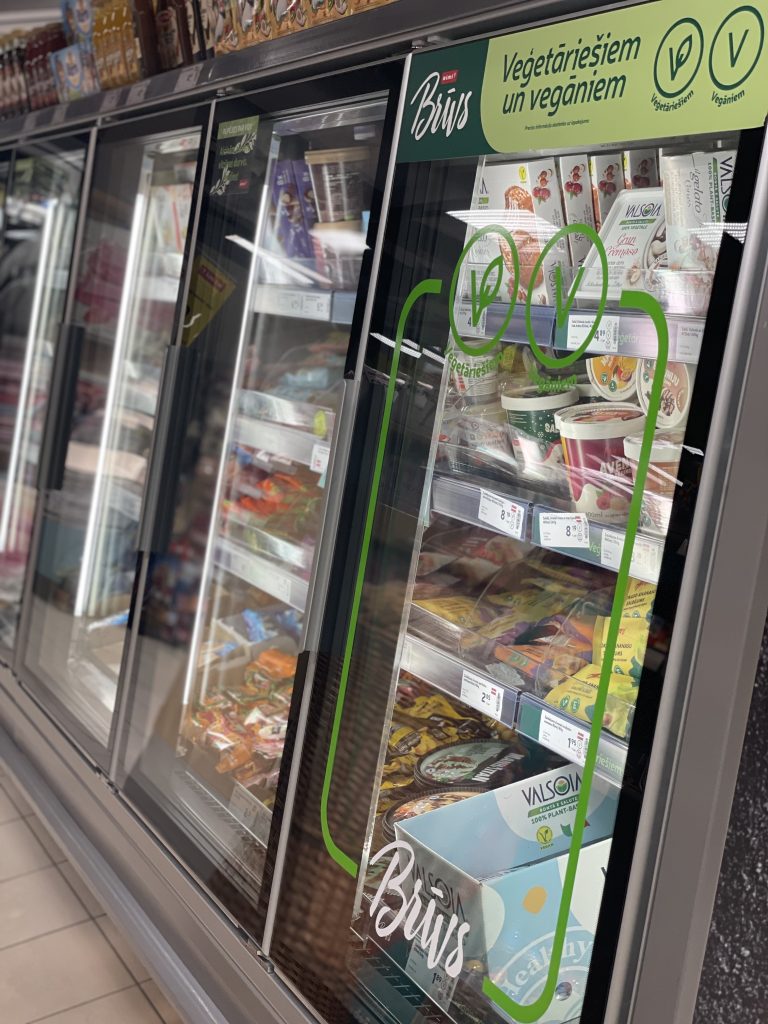 As a vegetarian going out for lunch is no problem in Riga. Every place I’ve gone to so far had at least one or two solid vegetarian meals on the menu. For vegans it is a bit harder finding a place to fill their stomachs. Try out Mazā Terapija, MiiT Coffee and Kozy Eats though, they cater specifically for meat and animal product free diets. Kozy Eats is my personal favourite vegetarian/vegan place in Riga. It is only around five minutes away from the Liden & Denz campus so it’s great for a quick lunch after school. I spend around 11€ for a main and a drink which a very good price for Riga. Another reasonably priced option for vegetarians is “Lido”. The options are pretty limited, however, the self-service restaurants are certainly an authentic Baltic experience.
You are a vegan caffeine addict? That’s no problem in Riga, as milk alternatives are available almost everywhere. And if you fancy some complimentary vegan cupcakes  I’d recommend “Muffins and More”. If that is too far away for you the franchise Costa Coffee has you covered. They have some vegan cookies and a delicious apple cake. 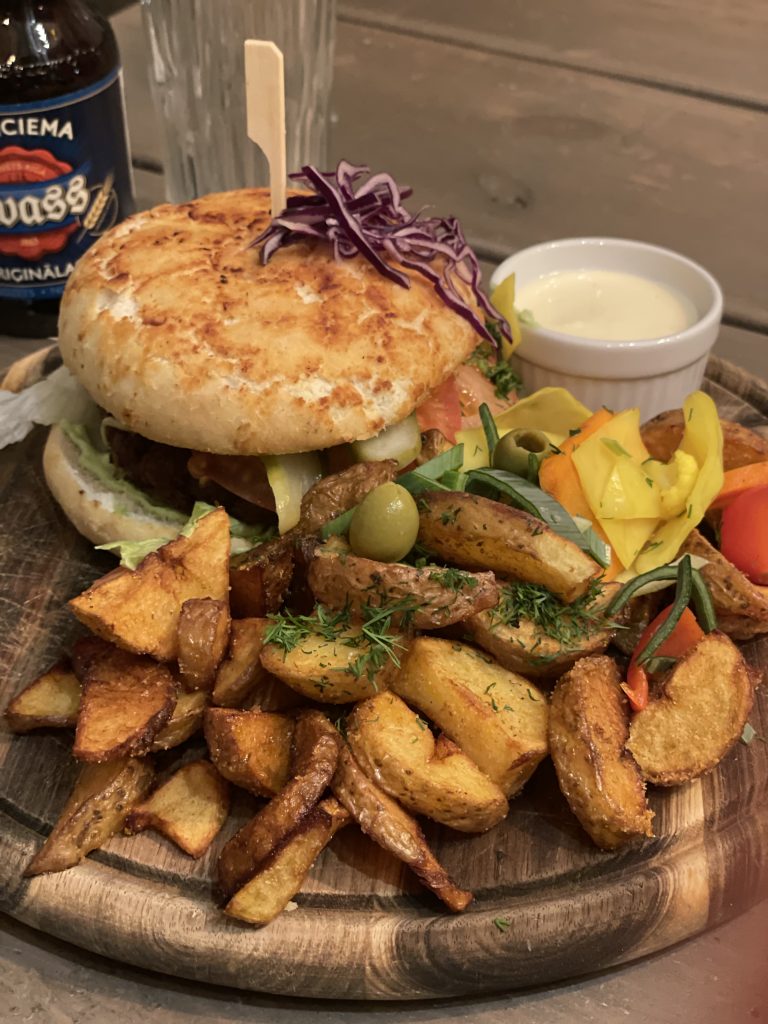 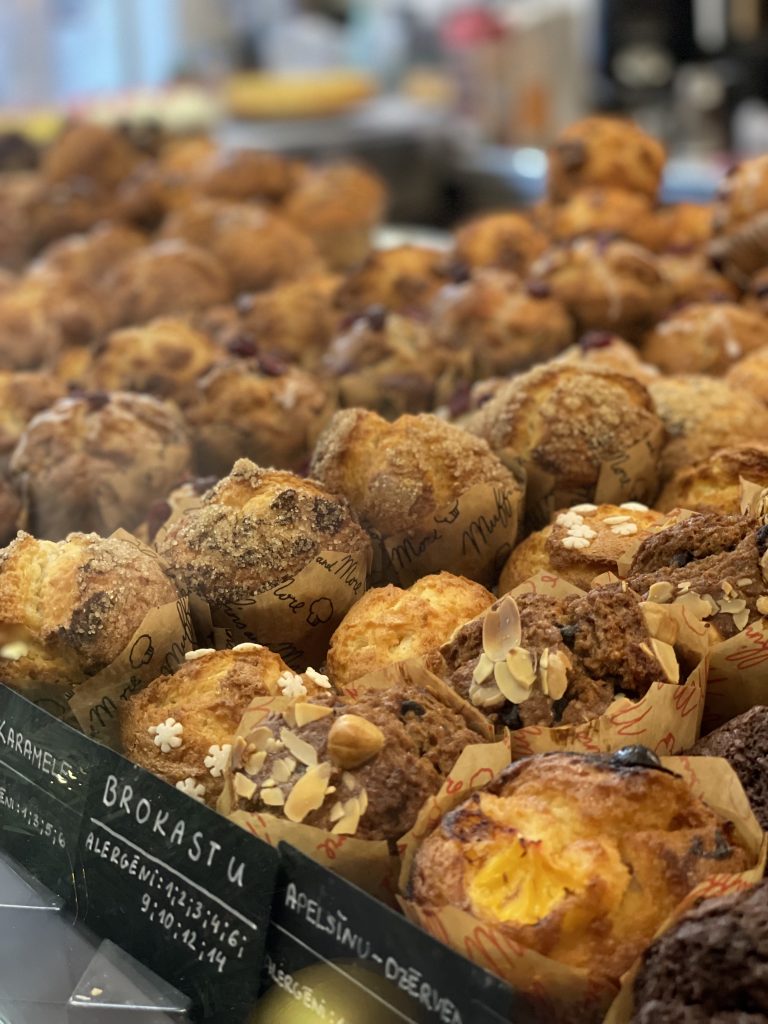 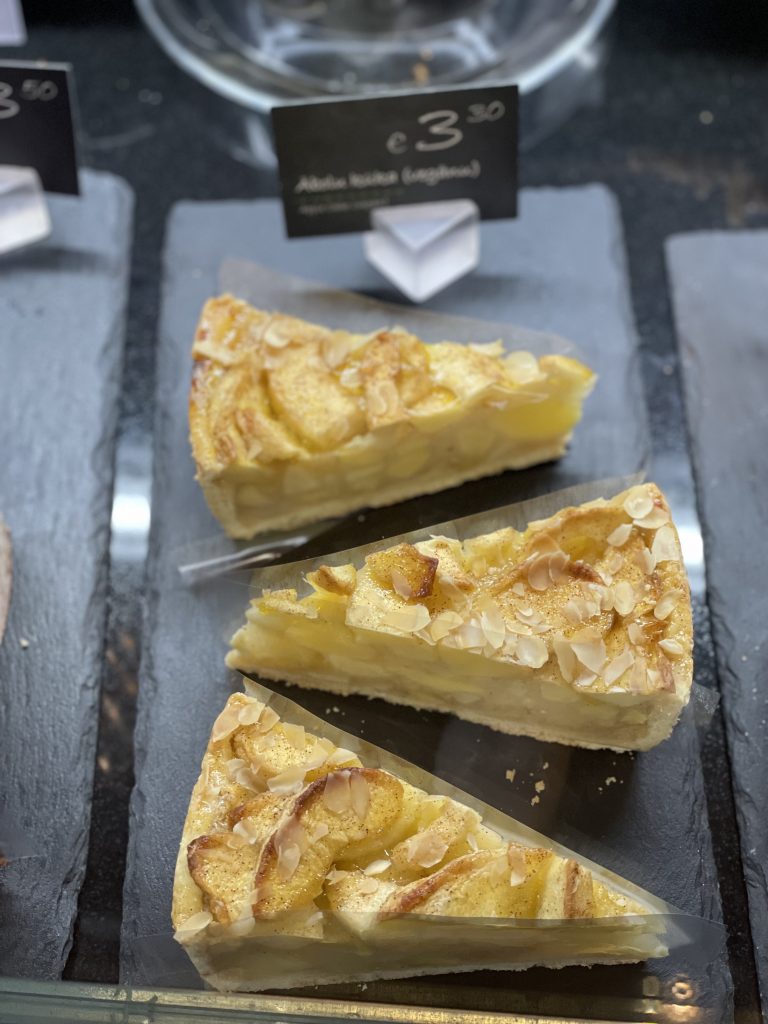 So, although it is no “veggie-heaven”, Riga certainly offers some good vegetarian and vegan options. As far as I can tell plant based diets have only recently become more popular in Latvia, an I’m excited to see what the place will be like in the future. Hopefully you found this article helpful and maybe I could give you some good recommendations. You have some recommendations yourself? Feel free to leave them in the comments. Спасибо за чтение, thank you for reading.

One response to “Vegetarian/Vegan in Riga:”